Saved on fittings: experts put forward another version of the disaster in Miami

The lack of design steel reinforcement could have led to the collapse of the Miami building, engineers say, but note that any conclusions are preliminary, as the investigation continues. 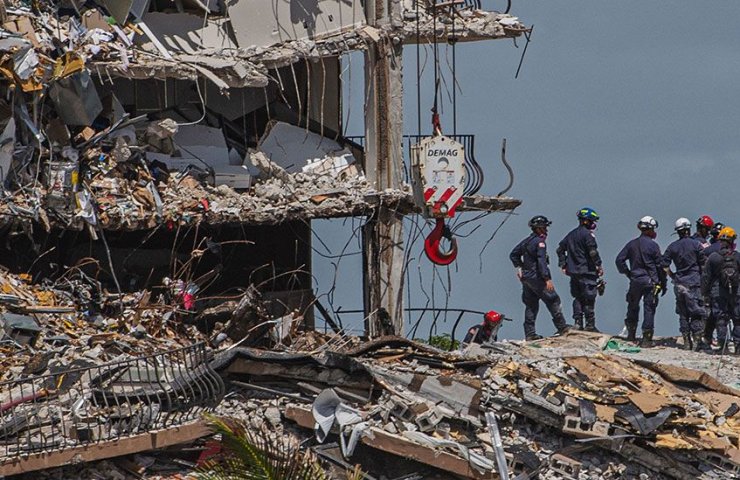 An insufficient amount of reinforcement in the building's foundations could have caused a catastrophic collapse of an apartment building in Miami, engineering experts interviewed by Independed said after examining photographs of the site and the destroyed complex.

The Champlain Towers South, a 12-story, 136-unit, reinforced concrete building was completed in 1981.

According to the original building design plan from 1979, a large amount of steel reinforcement was required to connect the concrete slabs under the multi-storey car park with vertical columns supporting the rest of the building at the top. However, photographs of the first collapse site show much less reinforcement than originally anticipated.

"The fittings may not be positioned exactly as the original blueprints require," forensic expert Allin Kilshemir told the newspaper.

However, he warned that any findings are still at a very early stage, and much more investigation is required before determining the cause of the building collapse, which killed at least 24 people and still 124 people. are reported missing.

“We have a number of issues that we think could be part of or a trigger for what happened,” he said.

Experts who have studied the recording suggest that the collapse process began in the basement of the building, above which there was a swimming pool located in front of the central section.

An insufficient amount of reinforcement could be the very "trigger", since over time, in conditions of high humidity, reinforcement embedded in concrete, rusting, significantly increases in diameter.

“The concrete around it begins to crack, which decreases its strength. And as soon as one column or overlap fails, everything develops according to the domino principle, ”the expert explained.

Search and rescue operations at the site of the collapse may soon end. Local authorities are reportedly working on plans to demolish the rest of the building as early as Sunday.

Building codes have been in place in Florida and beyond since the 1980s when the Champlain Towers were built, but local authorities have called for new measures to prevent future disasters.

Финансовая аналитика, прогнозы цен на сталь, железную руду, уголь и другие сырьевые товары. More news and analytics on Metallurgprom telegram channel - subscribe to get up-to-date market information and price forecasts faster than others.
Сomments
Add a comment
Сomments (0)
On this topic
Investigation results: The crash of the Boeing 737 Max Lion Air was caused by a combination of 9
The U.S. imposed duties on imports of wind turbines from Canada, Indonesia and Vietnam
Climate change will destroy every fourth bridge in the US
The shortage in the US steel market will last at least until the end of the first quarter of 2021
Tesla lost another 11 percent of its value after the publication of the report for the second
South Korea launches investigation into Tesla autopilot for murder
Recommended:
Ukraine arrested Russian metallurgical assets
The US continued to reduce steel imports in December year-on-year
Prices for metal products in Ukraine increased by 26% last year
News Analytics
Electric vehicles will play a key role in US aluminum production growth - Norsk01-02-2023, 12:17
The former president of Motor Sich was accused of aiding terrorists01-02-2023, 11:39
European stainless steel producers ready to raise prices31-01-2023, 16:16
World steel production in December 2022 collapsed by 10%31-01-2023, 14:36
Ukraine arrested Russian metallurgical assets31-01-2023, 10:13
European stainless steel producers ready to raise prices31-01-2023, 16:16
S&P: Russia will continue to dominate the steel export market in the Black05-01-2023, 11:22
Fitch Analysts Predict Big Drop in Global Steel Consumption This Year14-12-2022, 13:59
Analysts predict 5% annual growth in the iron casting market through 203006-12-2022, 12:44
Commodity prices will fall, metals quotes will rise slightly - Focus Economics28-11-2022, 13:28
Sign in with: