US urges Ukraine not to criticize Nord Stream 2 deal - Politico

The Biden administration is asking a disgruntled Ukraine not to create a fuss as it moves closer to an agreement on the Nord Stream-2 pipeline between Russia and Germany. 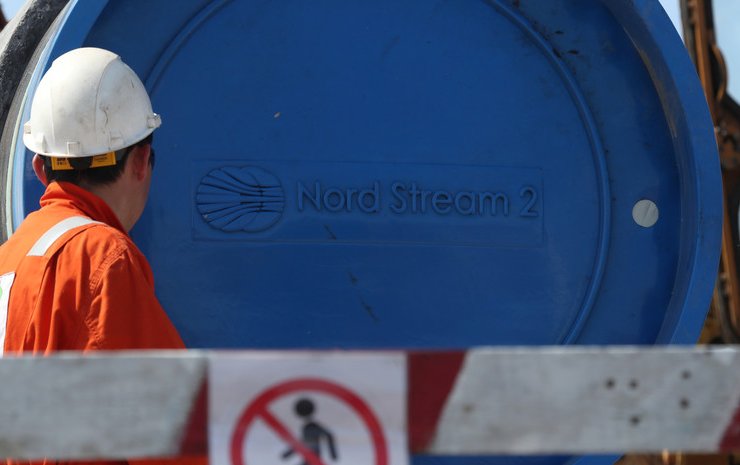 “US officials have indicated that publicly opposing the upcoming agreement could harm bilateral relations between Washington and Kiev. Officials also urged Ukrainians not to discuss potential plans of the United States and Germany with Congress, ”the statement said.

American negotiators and diplomats made it clear to the Ukrainian side that they had given up blocking the completion of the Nord Stream 2 gas pipeline, which will carry cheap natural gas from Russia to Germany.

At the same time, Politico notes that a high-ranking representative of the US administration disputed this data, saying that the situation is more nuanced, but the official refused to give details about the negotiations with Kiev.

Critics of the upcoming US-German pact on Nord Stream 2 say it will serve primarily Russian interests and hurt relations between Washington and Kiev.

"It is unbalanced and unfair that Russia is receiving huge benefits, and Ukraine has been criticized," Politico quoted Alina Polyakova, president and general director of the Center for European Policy Analysis. “It is 100 percent true that if Trump did it, everyone would go crazy,” she added.

The United States and Germany on Wednesday may announce an agreement on Nord Stream 2, The Wall Street Journal reported on Tuesday, July 20, citing sources in Berlin and Washington. According to the newspaper, the American administration will no longer oppose the gas pipeline project. Germany, in turn, will commit itself to helping Ukraine with energy projects and diplomacy.

The deal between Berlin and Washington stipulates that Germany will take action against Russia if Nord Stream 2 is used as a weapon against Ukraine. The draft agreement also provides that Germany will use its leverage to achieve an extension of the gas transit agreement between Ukraine and Russia for up to 10 years after its expiration in 2024, Bloomberg writes. In addition, the United States and Germany will seek to raise up to $ 1 billion in investment in a special fund to help Ukraine move to cleaner energy sources. Germany will also appoint a special envoy for the development of bilateral projects with Ukraine in the energy sector, allocating him $ 70 million.

Финансовая аналитика, прогнозы цен на сталь, железную руду, уголь и другие сырьевые товары. More news and analytics on Metallurgprom telegram channel - subscribe to get up-to-date market information and price forecasts faster than others.
Сomments
Add a comment
Сomments (0)
On this topic
Akademik Chersky arrives at the Nord Stream 2 pipe-laying site
The security threats from the launch of Nord Stream 2 cannot be compensated for - Naftogaz
The Swiss-Dutch company Allseas stopped the construction of the "Nord stream-2"
Trump's steel tariffs become Biden's political headache - Politico
German politicians increased pressure on Merkel demanding sanctions against the Nord Stream 2 gas
How the reform of the electricity market in Ukraine can lead to a collapse and what to do about it
Recommended:
Turkey in January-July increased imports of pig iron by 46.7%, tripling purchases in Russia
Purchase of gold products from the company "Basis Gold"
For 8 months of 2022, steel production in Ukraine fell by 64.5%, to 5.2 million tons
News Analytics
The production of passenger cars in Russia decreased by 2.8 times in eight29-09-2022, 11:19
Donetsk and Torez electrotechnical plants will start producing electrical29-09-2022, 11:37
Ukrainian coking plants reduced gross coke production by 55.2%29-09-2022, 11:28
China ramps up investment in transport to bolster economy29-09-2022, 11:33
The heads of mining companies named the main risks for business29-09-2022, 10:03
China production cuts in winter will give limited boost to steel markets -15-09-2022, 10:09
Steel prices may rise as manufacturers stop production11-09-2022, 14:06
IREPAS: The global long products market is in a "dramatic situation"10-09-2022, 20:49
Steel prices are unlikely to rise significantly in the near future - analysts02-09-2022, 22:58
Steel prices may move up on new data from China31-08-2022, 12:19
Sign in with: