In the event of Russian aggression against Ukraine, the German government must not allow the Nord Stream 2 gas pipeline to be put into operation, says Manfred Weber, head of the EVP faction in the European Parliament. 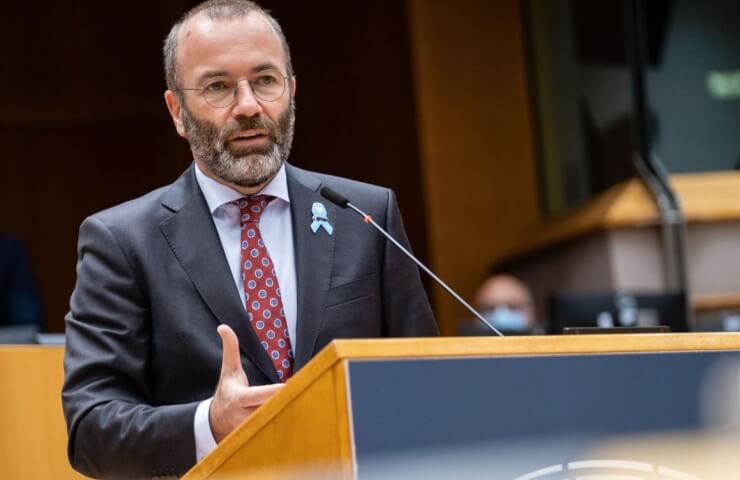 The head of the leading faction of the European Parliament - the European People's Party (EPP) - Manfred Weber called for the winding down of the Nord Stream 2 project in the event of an armed conflict between Russia and Ukraine. He made this statement in an interview with the Bild am Sonntag newspaper published on Sunday.

Weber argues that “the threat to Ukraine in light of the recent deployment of Russian troops on the border is real.”

"This situation is of great concern, the escalation of the conflict in the east of Ukraine is not ruled out," he said. According to Weber, the current situation is "a test for NATO and the Western community."

The MEP expressed the opinion that "the North Atlantic Alliance made it clear that the Russian action against Ukraine will have a high price." Weber called on the new ruling coalition of Germany (Social Democratic Party of Germany, Greens and Liberals) to clearly name this “price”.

“If Putin uses weapons, then the Nord Stream 2 gas pipeline will end. Commissioning would then have been ruled out. The future government of Germany should clearly define this price, ”the MEP said.

Earlier in an article published on the website of the Atlantic Council think tank, Ukrainian Defense Minister Oleksiy Reznik called on Western leaders to support his country in the face of pressure from Russia. At the same time, the politician noted that the result of the war on the territory of Ukraine would be millions of refugees, as well as interruptions in the supply of food products to Europe, in particular, grain, from Russia and Ukraine.

The construction of the main gas pipeline Nord Stream 2, which runs along the bottom of the Baltic Sea and has a length of 1,234 kilometers (2,468 kilometers along two lines), has been completed. It is technically ready to pump Russian natural gas to Europe, but no feedstock has yet been delivered through it.

In mid-October, the German regulator, the Federal Networks Agency (BNetzA), suspended the pipeline certification procedure pending the completion of the creation of a subsidiary of Nord Stream 2 AG to operate the national section of the pipeline and transfer key assets and human resources to it.

Press Secretary of the Russian President Dmitry Peskov called the reports of possible aggression in Ukraine empty and groundless escalation of tension. Peskov stressed that Russia poses no threat to anyone. However, he did not rule out the possibility of provocations to justify such statements, and warned that attempts to resolve the crisis in southeastern Ukraine by force would have the most serious consequences.

Финансовая аналитика, прогнозы цен на сталь, железную руду, уголь и другие сырьевые товары. More news and analytics on Metallurgprom telegram channel - subscribe to get up-to-date market information and price forecasts faster than others.
Сomments
Add a comment
Сomments (0)
On this topic
Elon Musk will invest in the factory in Berlin 4.4 billion euros
German politicians increased pressure on Merkel demanding sanctions against the Nord Stream 2 gas
The security threats from the launch of Nord Stream 2 cannot be compensated for - Naftogaz
US sanctions can stop the construction of the "Nord stream – 2" in the waters of Denmark
US urges Ukraine not to criticize Nord Stream 2 deal - Politico
How the reform of the electricity market in Ukraine can lead to a collapse and what to do about it
Recommended:
China will continue to reduce metallurgical capacity while maintaining the growth of steel production
Metinvest to mothball Europe's largest coking plant due to shelling
Taiwan Increased Exports of Iron and Steel by 39.3% in January-April
News Analytics
Swiss oil and gas equipment manufacturer Sulzer leaves Russia24-05-2022, 13:08
BIR: European Commission's decision on scrap metal will be the most tragic24-05-2022, 11:41
Rejection of Russian palladium destroys markets24-05-2022, 11:41
Volvo starts mass production of electric trucks made from decarbonized steel24-05-2022, 10:09
European steel prices are directly dependent on Russian gas prices - MetalMiner24-05-2022, 10:52
US steel market sentiment becomes more price neutral05-05-2022, 10:15
The global high-strength steel market will grow steadily by 5% annually for the04-05-2022, 08:45
China steel inventories hit 13-month high amid COVID-19 outbreak30-04-2022, 16:38
Slowdown in global auto sector affects steel prices27-04-2022, 12:36
World alumina production reaches a record 138 million tons21-04-2022, 09:54
Sign in with: