Vladimir Zelensky and Vladimir Putin welcomed the conclusion of the contract on the transit of Russian gas through the territory of Ukraine, signed yesterday. 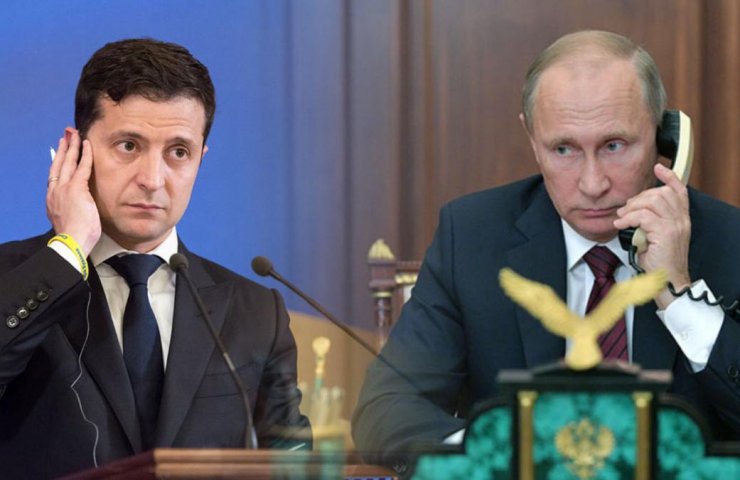 President Vladimir Zelensky held a telephone conversation with President of the Russian Federation Vladimir Putin. As announced the office Zelensky in Facebook, the leaders congratulated each other a happy new year and held a mutual release of detained persons, which took place on 29 December. The two sides also welcomed the signing of a contract for the transit of Russian gas through the territory of Ukraine, signed yesterday.

During the conversation the heads of state also agreed to proceed immediately to the approval of the lists for the release of Ukrainian, including the Crimean in the Crimea and on the territory of Russia and Russian in Ukraine, said the office of the President of Ukraine.

"the two Sides expressed the hope that full ceasefire along the demarcation line in the Donbass will begin soon," - said in Kiev.

In a press-service of the Kremlin said that the conversation was held on the initiative of Kiev.

"the Presidents exchanged congratulations on the occasion of the New year. Called for the development of Russian-Ukrainian relations in 2020", - stated in the message.

during the talks the importance was stressed of a prisoner on the eve of the "package" deal, providing for the continuation from 1 January 2020 the uninterrupted transit of Russian gas to Europe via Ukraine. Noted the constructive nature of the talks, the results of which create a favorable atmosphere for the solution of other bilateral issues.

Press service of Vladimir Putin gave a positive assessment held on 29 December between Kiev and Donbass, the exchange of detained persons according to the principle of "all installed all installed".

"it is Stated that it is in line with the agreements reached at the summit "Norman four" in Paris on December 9, contributes to the strengthening of mutual trust. Accented the need to continue consistent implementation of "Complex measures" by the parties Ukrainian domestic conflict", - said in the Kremlin.

Recommended:
European Commission Reveals Details of CBAM's Carbon Borders Mechanism
The profitability of purchases of scrap metal in Ukraine has decreased, but is still higher than the norm - UAVtormet
Ferrexpo board of directors decided to abandon pre-export lending
On this topic
The transit of Russian gas through Ukraine will continue on terms acceptable to all parties –
Negotiations on the transit of Russian gas: deadline 13 December passed without a deal
Who will freeze first, if Ukraine will stop the transit of Russian gas?
Tough guy against the comedian – as you can see the upcoming meeting of the two Vladimirov in the
Heating season in Ukraine: where there can be problems with heat and why
Moldova prepares to stop gas transit through Ukraine
Partner news
Сomments
Add a comment
Сomments (0)
News Analytics
Azerbaijan's SOCAR plans to invest in the extraction of battery metals in26-07-2021, 22:00
The first domestic industrial energy storage system was developed and launched26-07-2021, 22:11
The profitability of purchases of scrap metal in Ukraine has decreased, but is26-07-2021, 17:27
Metinvest is ready to pay more than 9 billion hryvnia for the Dnieper steel26-07-2021, 13:01
Cherkassk Azot by Dmitry Firtash completed the modernization of the ammonia26-07-2021, 13:45
On the regional markets of metallurgical products, prices are balancing in a22-07-2021, 16:22
Demand for armaments will ensure a stable growth of armored steel sales by 4%20-07-2021, 10:10
Protectionist Measures Support European Steel Prices Despite Summer Lull19-07-2021, 11:02
Positive price growth is observed in the markets for metallurgical products16-07-2021, 14:12
European steel market is in confusion: price growth has slowed down, but no one21-06-2021, 17:40