"Zvezda" prepares for sea trials of the tanker "Vladimir Monomakh"

The bookmark of the tanker took place in September 2018, and it was launched in May 2020 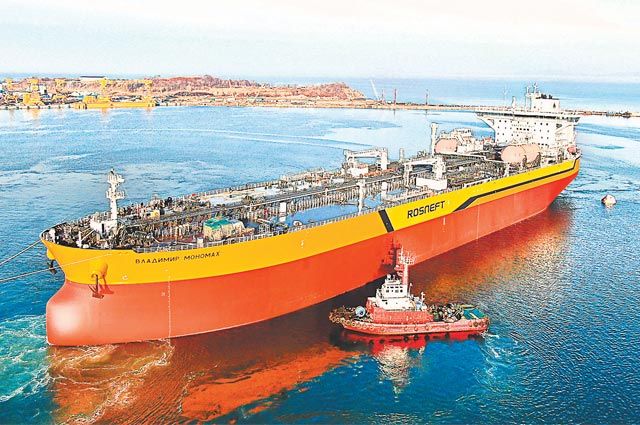 The new vessel has an ice class 1A and will be able to reach a speed of 14.6 knots. The tanker is equipped with a helicopter pad.

Rosneft manages the Zvezda shipyard development project and is the largest customer for the plant's products. In particular, Zvezda will have to build 10 Aframax-class tankers for Rosneft, among which Vladimir Monomakh is a pilot.

The laying of the tanker took place in September 2018, and its launching took place in May 2020. By now, the vessel has already passed the stage of mooring tests and starting the main engine.

Tankers of this series will be able to operate both on traditional marine fuel and on liquefied natural gas (LNG).

Zvezda is currently building several more tankers of the series, but has not yet revealed the exact dates of their commissioning.

The shipyard also has a large order for the construction of 15 LNG carriers, which will serve the Arctic LNG 2 plant. The pilot tanker of the series is ordered by Sovcomflot, and the remaining 14 tankers are ordered by Smart LNG, a joint venture between Sovcomflot and Novatek.

Recommended:
Ukraine faces a shortage of high-quality investment "green" projects
Ukraine invests over 50 billion hryvnia in the renovation of passenger cars and infrastructure
Interpipe specialists licensed a workshop in the UAE for threading premium pipes
On this topic
The Russian space Agency has accused trump of the creation of the basis for seizure of territories
Rosneft goes from Venezuela
Former German Chancellor Schroeder has strongly condemned U.S. sanctions against the "Nord stream –
Russia subsidizes the construction of tankers for transportation of liquefied gas
In Singapore for the debts of the arrested "Sevastopol"
Hebei Iron and Steel will build a plant in the Russian Far East
Partner news
Сomments
Add a comment
Сomments (0)
News Analytics
Azerbaijan's SOCAR plans to invest in the extraction of battery metals in26-07-2021, 22:00
The first domestic industrial energy storage system was developed and launched26-07-2021, 22:11
The profitability of purchases of scrap metal in Ukraine has decreased, but is26-07-2021, 17:27
Metinvest is ready to pay more than 9 billion hryvnia for the Dnieper steel26-07-2021, 13:01
Cherkassk Azot by Dmitry Firtash completed the modernization of the ammonia26-07-2021, 13:45
On the regional markets of metallurgical products, prices are balancing in a22-07-2021, 16:22
Demand for armaments will ensure a stable growth of armored steel sales by 4%20-07-2021, 10:10
Protectionist Measures Support European Steel Prices Despite Summer Lull19-07-2021, 11:02
Positive price growth is observed in the markets for metallurgical products16-07-2021, 14:12
European steel market is in confusion: price growth has slowed down, but no one21-06-2021, 17:40