due to the floods on the rivers in Nizhniye Sergi there was a flooding of the territory as the rolling "NLMK-Ural". 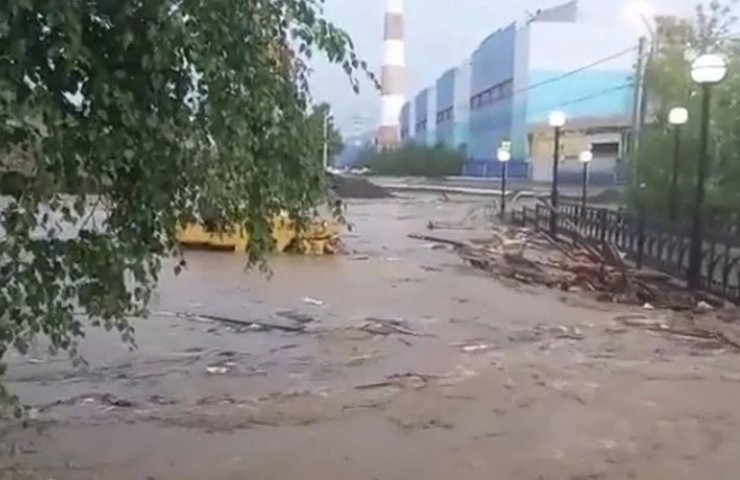 "Novolipetsk steel" has suspended production at the site "NLMK-Ural" in Nizhniye Sergi due to the flooding of the production of the rolling mill, said "Interfax" in the company.

"on 20 July at about 20:00 due to heavy rain and increasing water level in rivers in Nizhniye Sergi there was a flooding of the territory as the rolling "NLMK-Ural". The company was promptly disconnected Elektro - and gas supply, shut down the equipment, - said the official representative of the company. - Evacuated staff, no one was hurt".

He added that now the situation is under control, the water from the shop and the basement pumped out.

In Nizhniye Sergi is 250 rolling mill capacity of about 1 million tons of steel a year.

"NLMK-Ural" is the base enterprise of the division "rolled steel in Russia" group "NLMK" and specializiruetsya in the production of continuous cast square billets, reinforcement bars and coils, wire rod. Production sites "NLMK-Ural" located in the cities of Revda (EAF production), Nizhniye Sergi and Berezovsky (section manufacturing). Rolling capacity is about 2 million tons of steel.

Recommended:
The third diesel train of the DPKr-3 series produced by KVSZ went for testing
Chinese banks banned from lending to private investors buying up commodities
Dnipropetrovsk Iron and Steel Works plans reconstruction of two blast furnaces
On this topic
In Perm mini-hotel has died from-for break of a heating pipe 5 people
Belarus stopped buying Russian oil from January 1
World steel production in November decreased by the percentage
Russian factories reduce steel production
NLMK takes a wait-and-see position in the US market
The value of shares of Novolipetsk Metallurgical Plant fell by 12.26 percent
Add a comment
Сomments (0)
News Analytics
Metinvest's Italian contractors reveal details of the investment project in16-06-2021, 23:01
Energoatom approved Electrotyazhmash as a supplier of turbine generators for16-06-2021, 14:57
Representatives of Ukraine and Germany discussed the prospects for cooperation16-06-2021, 10:49
Vestas and DTEK RES signed an agreement for the supply of wind turbines for the16-06-2021, 10:45
SSAB agrees with Volvo to supply and refine HYBRIT decarbonized steel16-06-2021, 10:40
Vaccinations fuel demand for platinum - World Platinum Investment Council08-06-2021, 12:55
Sharp price growth continues in the rolled metal market - Ukrpromvneshexpertiza08-06-2021, 11:04
Analysts note overheating of the global scrap metal market01-06-2021, 13:28
Hydrogen-fueled steelmaking could be competitive after 2050 - McKinsey19-05-2021, 14:22
Steel raw material prices are skyrocketing across the board18-05-2021, 12:34
Sign in with: