BELAZ dump trucks, the most powerful of which can transport 450 tons, can also add to the line of heavyweights of the Russian car industry. 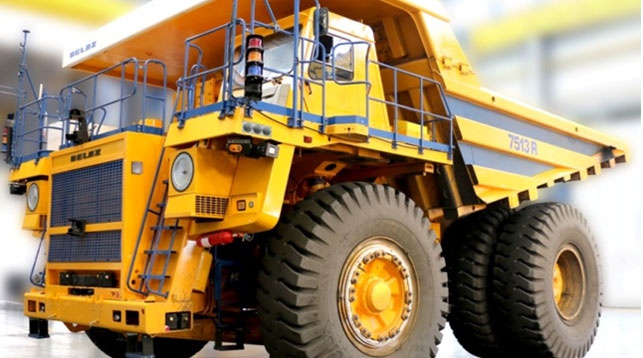 On September 28, at the VII Forum of the Regions of Belarus and Russia, State Secretary - Deputy Minister of Industry and Trade of the Russian Federation Viktor Yevtukhov suggested starting the production of Belarusian BELAZ vehicles in Russia. He explained that this is the initiative of the Belarusian side.

“Belarusian colleagues came up with a proposal to consider the production of dump trucks in the Russian Federation. We have taken this into active development. I think that such a project can also be implemented on the territory of the Russian Federation, ”said the Deputy Minister, speaking at the section“ Joint Projects as a Factor of Stable Economic Development of Belarus and Russia.

As you know, BELAZ is considered a giant in the production of mining trucks - it accounts for a third of the entire world market for these vehicles. The export share of the enterprise, according to statistics, is more than 95 percent. And although the company's products are supplied to 80 countries of the world, it is Russia that is its main buyer. The Union State, observers say, accounts for about two-thirds of the export deliveries of Belarusian heavyweights.

For almost two decades, for example, there has been a cooperation agreement between the automotive industry of the Republic of Belarus and Lebedinsky GOK, located in the Belgorod region. In the last three years alone, 26 units of mining dump trucks and special equipment have been delivered to this plant. And also, they explained at the auto giant, in the deepest Russian iron ore quarry in the world, the maximum width of which is five kilometers, and the depth from the surface of the earth reaches 600 meters, BELAZ trucks carry out tasks of transporting large volumes of rock mass, deliver ore and quartzite to the processing plant.

In addition, Yevtukhov said at the forum, the Belarusian side proposed to study the possibility of in-depth localization of the production of road-building equipment in Bryansk. The parties are now determining the range of required products.

Viktor Yevtukhov called the creation of an enterprise for the production of carbon black in the Mogilev free economic zone as a fresh example of industrial cooperation. The investment project is being implemented by Omsk Carbon Group, Russian investments amount to about 150 million euros.

Recommended:
The State Space Agency of Ukraine has identified 6 key objectives of the space program
The cost of electricity in Russia peaks in five years
Zaporozhtransformator resumes deliveries to Argentina
On this topic
BELAZ delivered three dump trucks to the Irkutsk Region
BelAZ launches mining electrochemical
Belarus bought in Saudi Arabia for 80 thousand tons of oil
Procurement of scrap metal in Russia from-for coronavirus dropped four times
Russia failed to agree with Belarus on oil transit
Is the German auto industry preparing for a collapse?
Add a comment
Сomments (0)
News Analytics
US and EU suspend the collection of duties that were imposed against each other05-03-2021, 22:48
Turboatom and Electrotyazhmash discussed prospects for cooperation under05-03-2021, 19:04
DMZ Yaroslavsky in February almost doubled the production of rolled products05-03-2021, 18:19
Sanjeev Gupta Metallurgical Alliance Stops Paying Greensill Loans05-03-2021, 18:18
China to build high standard free trade zone network to reach worldwide - Xinhua05-03-2021, 16:43
Spread between raw materials and high strength alloy steel in Europe increased01-03-2021, 20:21
Increase in prices is forecasted in the markets of steel raw materials -26-02-2021, 09:25
Troy ounce of gold will drop $ 500 in two years - Fitch25-02-2021, 18:29
Global iron ore production growth to outstrip cumulative production in India23-02-2021, 10:22
Fitch Ratings Warns of “Shocking Impact” on Fossil Fuel Exporters18-02-2021, 14:44
Sign in with: