KAMAZ to open an iron casting plant in Kostanay

The construction of the most modern plant of its kind is part of a large work on reengineering and development of a new model range of KAMAZ. 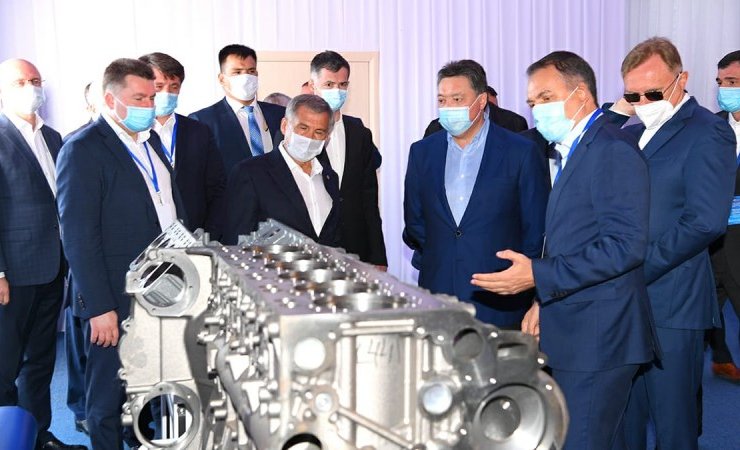 Leading Russian manufacturer of trucks KAMAZ will open a plant for the production of cast iron KamLitKZ in Kazakhstan, in the city of Kostanay. General Director of KAMAZ Sergey Kogogin, President of the Republic of Tatarstan Rustam Minnikhanov, Vice Minister of Industry and Trade of the Russian Federation Alexander Morozov and Prime Minister of the Republic of Kazakhstan Askar Mamin took part in the solemn ceremony of laying the stone for construction.

The new KamLitKZ plant with an area of ​​28 thousand sq. m will join the ranks of enterprises in the industrial zone of Kostanay in the framework of joint projects with KAMAZ. After reaching the design capacity, more than 40 thousand tons of cast iron per year will be produced here. Products include cylinder blocks, engine block heads and other components. The products will be supplied to KAMAZ. The amount of investment in the project is more than $ 200 million.

“We pin great hopes on joint projects with Kazakhstan and transfer a number of responsible positions to the area in Kostanay, on which depend the reliability, power and efficiency of KAMAZ equipment and, ultimately, the success of our consumers' business depends,” stressed Sergey Kogogin .

The construction of the most modern plant of its kind is part of a large work on reengineering and development of a new model range of KAMAZ. This is another step in the course taken by the company to produce cars of the K5 generation. The task assigned, among other things, to the future Kostanay plant is the production of a line of the latest Russian cars that will successfully compete and surpass flagship foreign trucks in consumer properties.

“Kazakhstan actively supports business that shares the country's desire to work together, design and implement new horizons for integration with our strategic partners. It is gratifying that the country will see production with the direct participation of such a strong figure in the world mechanical engineering as KAMAZ, ”said Prime Minister of Kazakhstan Askar Mamin.

Recommended:
Belarus offers to produce BELAZ dump trucks in Russia
Australian dollar lost about a percent against the US dollar due to China's refusal to import coal
A groundbreaking ceremony for a new sinter plant took place in Kryvyi Rih
On this topic
Hyundai started building plant of automobile engines in St. Petersburg
KAMAZ resumes production machines
KAMAZ announced the financial results for last year
On "KAMAZ" has created a headquarters to counter the economic risks of the spread of coronavirus
Unmanned Trucks are inspected in the pits of the Kuzbass
KAMAZ has begun testing drone at the plant
Add a comment
Сomments (0)
News Analytics
Innovative matrix headlights on the Audi E-Tron19-10-2020, 22:43
Tensions rise between China and Australia over commodity trade14-10-2020, 18:15
The European Union confirms its intention to introduce a border tax on carbon13-10-2020, 13:20
ArcelorMittal Europe to start producing green steel from 202013-10-2020, 12:44
Kremenchug refinery launched an isomerization unit13-10-2020, 12:43
Dolomite powder market to reach USD 33.44 billion by 202705-10-2020, 12:33
Iron ore prices to surpass six-year high soon16-09-2020, 10:32
World Oil Demand Peak May Be Over - BP15-09-2020, 09:05
China expands car market capacity by increasing demand for steel and metals11-09-2020, 10:56
Prices continue to rise in the long and flat steel markets08-09-2020, 14:25
Sign in with: