The world's largest classification society, the Norwegian organization DNV GL, has ceased to provide verification services related to vessels and equipment on these vessels serving the Nord Stream 2 project. 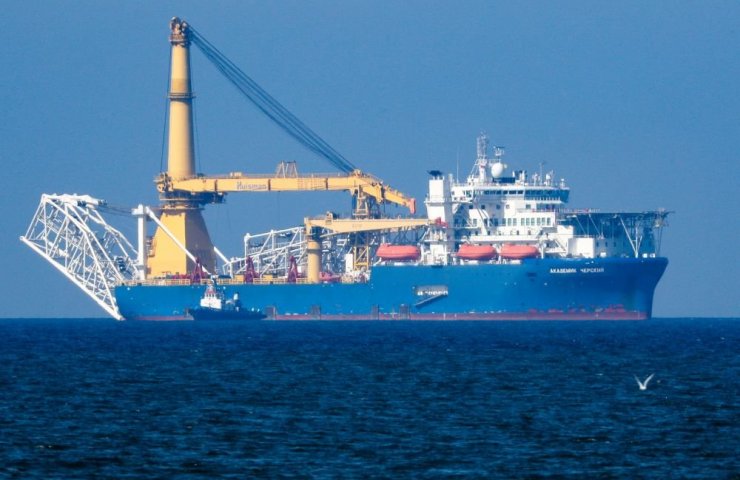 The Russian pipelayer Akademik Chersky has completed the transition from the German port of Mukran (where the logistics terminal of the Nord Stream 2 construction site is located) to the Kaliningrad region and anchored in the roadstead of the Curonian Spit, according to the positioning systems of sea vessels.

Next to the construction ship are two auxiliary ships - "Baltic Explorer" and "Balkan". Following the Cherskiy, two Russian auxiliary vessels Umka and Finval left the water area of ​​the Mukran port.

In October, in the same place on the roadstead of the Curonian Spit, Akademik Chersky and a detachment of special vessels conducted training on the Baltic Sea shelf for further underwater work on the Nord Stream 2 pipeline.

In addition, another Russian vessel, the Portovy gas tanker, purchased to operate as an offshore LNG storage facility at the Portovaya compressor station, has now come to the shores of Kaliningrad.

On Thursday, certification company DNV GL announced that it had stopped work on the Nord Stream 2 project. DNV GL's work included reviewing documentation and monitoring construction work for compliance with standards. This included monitoring tests and preparing equipment used on board ships during pipeline installation.

DNV GL ceased work on the project after receiving comments from the US State Department regarding the European Energy Security Protection Act (PEESA).

The construction of the pipeline by European contractors was stopped due to US sanctions and, as Gazprom said, the Nord Stream 2 project, which is almost 94% completed, will be completed by the Russian side.

On October 20, the US Department of State expanded the interpretation of the "provision of ships" from the Nord Stream 2 sanctions law, stating that the actions of companies providing various services for such ships (for example, services for retrofitting or upgrading or financing such works). The agency gave companies 30 days to curtail the prohibited activities.

American lawmakers are going to extend sanctions directly to certification services for Nord Stream 2, which threatens to put an end to the project. However, the corresponding bill will not be adopted until December, and it is not finally clear what sanctions will be included there.

Recommended:
Ferrari's first crossover to begin production in 2022
China and Ukraine held the fourth meeting of the Intergovernmental Commission on Cooperation
Ukraine - Moldova: together in the EU
On this topic
South Korean DSME to build six LNG carriers for Arctic LNG 2
Smart Maritime Group launched 4 tanker for the Dutch VEKA Group
Yuzhmash told whether it is possible to launch reusable rockets from the Black Sea
Reuters: US will punish all those involved in the construction of "Nord stream – 2"
The energy Minister said on completion, "Nord stream 2" for a few months
The ship that brought coal to Ukraine from Colombia called at the Russian port of Ust-Luga
Add a comment
Сomments (0)
News Analytics
Germany gave permission for the completion of Nord Stream 2 in January - May15-01-2021, 11:10
Zaporizhstal exported about 900 thousand tons of rolled metal along the Dnieper15-01-2021, 11:39
Russian automotive market shrank 9.1% in 202015-01-2021, 09:44
Installation of a spreader made by Ukrainian NKMZ continues in Uzbekistan15-01-2021, 09:06
KZhRK began work on the installation of a new skip hoisting unit at the15-01-2021, 09:37
China will overtake the United States to become the world's largest economy in27-12-2020, 12:04
The shortage in the US steel market will last at least until the end of the25-12-2020, 11:36
Steel production in China to surpass one billion tons this year23-12-2020, 10:59
Iron ore prices hit seven-year high and continue to rise15-12-2020, 10:26
Prices for metallurgical raw materials continue to rise in regional markets10-12-2020, 11:32
Sign in with: