The company employs about 1,500 welders - this is the main specialty for Uralvagonzavod. 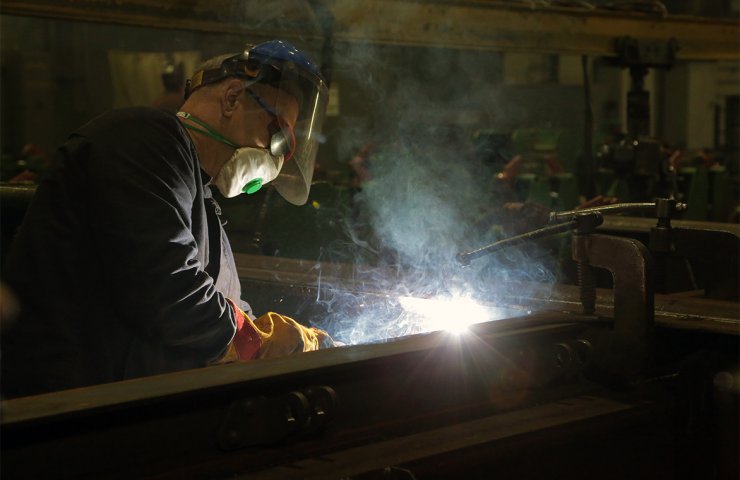 Uralvagonzavod (part of the Concern UVZ is a part of the State Corporation Rostec) is introducing into production 8 new high-tech plasma, laser, thermal and waterjet cutting plants for the car-assembly and mechanical-assembly shops. The use of these modern technologies allows avoiding the manufacture of expensive die tooling and not reconfiguring the pressing equipment that is already involved in the production of serial products. At the same time, the range of materials used can be significantly expanded.

A laser cutting machine is installed in the cold stamping workshop. The use of high-precision laser-technological complexes reduces labor intensity up to 100 and more times. Two new thermal cutting machines are used in the thermal shop No.2. The waterjet cutting unit was purchased for the general assembly shop, mechanical assembly shop No. 4 and thermal shop No. 3. Plasma cutting machine is installed in the body welding and machining workshop. It is used to manufacture parts from sheet with a thickness of 0.4 mm to 30 mm, while the error does not exceed 1 mm.

Two years earlier, UVZ introduced the technology of oxygen plasma cutting. It allows you to abandon the operations of cleaning the edges, which means that it also significantly reduces the complexity of manufacturing parts and increases cutting productivity by 1.8 times.

Specialists from the department of the chief welder of Uralvagonzavod are involved in the implementation of mechanical and thermal cutting units. In May of this year, they celebrate not only a professional holiday - the Day of the Welder, but also an anniversary. On May 3, 1936, the Central Welding Bureau was organized at the enterprise, and this day is considered the beginning of the history of welding production at Uralvagonzavod.

The company employs about 1,500 welders - this is the main specialty for Uralvagonzavod. Their arsenal includes equipment for all major methods of welding, cutting and soldering. Each UVZ product consists of hundreds of welded assemblies and seams. For example, in the production of one serial car, they must be completed for more than a kilometer. Over 50,000 kilometers of welding seams are produced at Uralvagonzavod per year, which is more than the length of the equator. And with welding wire, which is consumed during the year in the manufacture of cars and special equipment, the ground can be girded 4 times.

“The competence of the department of the chief welder is not only directly welding technologies, but also soldering and cutting metal. Once upon a time, the introduction of the laser cutting process could be compared to a transfer from an airplane to a spacecraft, and we have made a lot of efforts to master new technologies. And today such equipment is used in production everywhere, including microplasma, oxygen and underwater cutting. Further development of welding production is represented by an increase in the use of science-intensive technologies, equipment and complex computerization of the production process. We met the anniversary full of strength and new ideas. The development of welding production is in the hands of competent highly qualified specialists and workers ", - says the chief welder of the Uralvagonzavod Andrey Masalkov.

Финансовая аналитика, прогнозы цен на сталь, железную руду, уголь и другие сырьевые товары. More news and analytics on Metallurgprom telegram channel - subscribe to get up-to-date market information and price forecasts faster than others.
Сomments
Add a comment
Сomments (0)
On this topic
Uralvagonzavod put into operation 334 units of new equipment in 2020
Uralvagonzavod will switch to the production of a new generation railway bogie
Uralvagonzavod signed a contract for 3 thousand gondola cars
Uralvagonzavod presented the first refrigerated car in Russia
Uralvagonzavod began to produce a covered wagon with sliding doors
Uralvagonzavod will change the assortment due to overproduction of open wagons
Recommended:
UK is ready to give 300 million pounds to save British Steel
British Steel seeks financial support from the government to continue work
Sweden announced the discovery of Europe's largest deposit of rare earth metals
News Analytics
European steel price rise that began in January will be short-lived - MEPS26-01-2023, 14:44
Steel production in China rose in the first decade of January26-01-2023, 12:30
UK is ready to give 300 million pounds to save British Steel20-01-2023, 21:31
Carriage building plant in Kremenchug stopped production due to debts20-01-2023, 21:11
Europe's passenger car market records its worst year since the turn of the20-01-2023, 21:03
S&P: Russia will continue to dominate the steel export market in the Black05-01-2023, 11:22
Fitch Analysts Predict Big Drop in Global Steel Consumption This Year14-12-2022, 13:59
Analysts predict 5% annual growth in the iron casting market through 203006-12-2022, 12:44
Commodity prices will fall, metals quotes will rise slightly - Focus Economics28-11-2022, 13:28
Platinum market to face shortage next year - WPIC22-11-2022, 18:25
Sign in with: