Uralvagonzavod began to produce a covered wagon with sliding doors

The novelty can be seen at the International Railway Show of the 1520 PRO space //Dvizhenie.Expo. 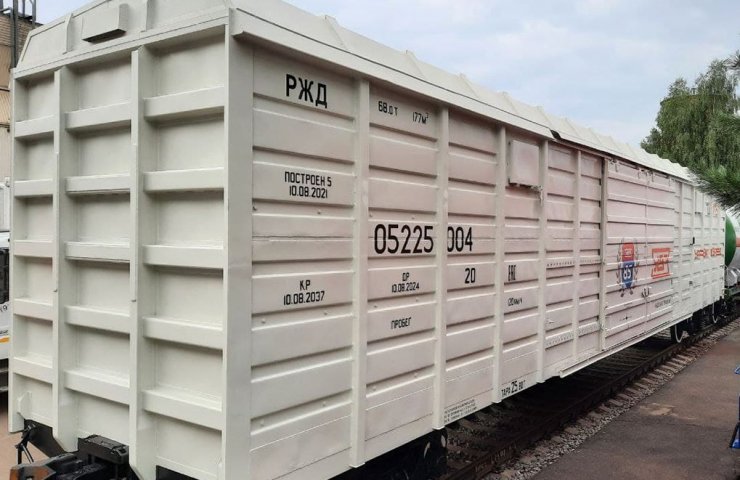 Uralvagonzavod (part of the Concern UVZ is part of the State Corporation Rostec) at the International Railway Salon of the 1520 PRO space//Dvizhenie.Expo presents a new product in the line of rolling stock - a covered wagon with sliding doors.

Covered car model 11-5225-01 was developed by design engineers of the Ural Design Bureau of Car Building (part of the Uralvagonzavod Concern is part of the Rostec State Corporation). The prototype is now being tested. The main competitive advantage of the new product is the increased usable body volume. It is 177 m3. Due to its internal length, the car can accommodate 3 euro pallets more than a typical covered car: 45 versus 42. The size of the doorway is also increased in comparison with analogues, which improves the conditions for loading containerized and piece goods using forklifts. Carrying capacity of the car is 68 tons.

These parameters, according to experts, will allow the covered wagons of the Uralvagonzavod to occupy their niche in the market for the transportation of packaged, piece, bulk and other cargoes requiring protection from atmospheric precipitation.

Uralvagonzavod has experience in the production of covered wagons. They were mass-produced at the Nizhny Tagil enterprise from 1938 to 1954. A total of 48 630 covered wagons were manufactured. At present, UVZ manufactures a similar type of rolling stock: a VPV-135K weighing car and a 16-5213 refrigerator car.

“Today Uralvagonzavod produces the widest range of rolling stock in Russia: from six- and four-axle mainline dump cars and weighing cars to piggyback platforms, hopper cars and tanks for various purposes. It is safe to say that no other enterprise has such a large range of rolling stock axles and such production capabilities. Mastering the production of covered wagons will further expand the competence of the enterprise, ”says Boris Myagkov, Deputy General Director for Civilian Products of the Uralvagonzavod Concern.

Финансовая аналитика, прогнозы цен на сталь, железную руду, уголь и другие сырьевые товары. More news and analytics on Metallurgprom telegram channel - subscribe to get up-to-date market information and price forecasts faster than others.
Сomments
Add a comment
Сomments (0)
On this topic
Tesla Model Y received one of the lowest ratings in the consumer rating
Tesla will recall more than 10,000 cars with defective roof and steering wheel
Chinese subway cars begin operational tests in Chicago
Tesla starts shipping Chinese versions of the Model Y SUV
The world's first magnetic levitation train with a speed of 600 km /h rolled off the assembly line
Tesla lowers Model prices 3 China 10%, to obtain subsidies from Beijing
Recommended:
UK is ready to give 300 million pounds to save British Steel
Zaporizhstal Metallurgical Plant mastered eight new types of products in 2022
The US continued to reduce steel imports in December year-on-year
News Analytics
War in Ukraine to accelerate world economy transition to clean energy - BP30-01-2023, 11:49
ArcelorMittal invests $120m in US green steel company30-01-2023, 11:11
The United States refused to comply with the decision of the WTO on tariffs on29-01-2023, 20:08
China remains the world leader in shipbuilding with a 50% share of new shipyard29-01-2023, 12:35
Prices for metal products in Ukraine increased by 26% last year29-01-2023, 12:06
S&P: Russia will continue to dominate the steel export market in the Black05-01-2023, 11:22
Fitch Analysts Predict Big Drop in Global Steel Consumption This Year14-12-2022, 13:59
Analysts predict 5% annual growth in the iron casting market through 203006-12-2022, 12:44
Commodity prices will fall, metals quotes will rise slightly - Focus Economics28-11-2022, 13:28
Platinum market to face shortage next year - WPIC22-11-2022, 18:25
Sign in with: