New bogies will be more expedient to use in rolling stock, which requires high speeds. 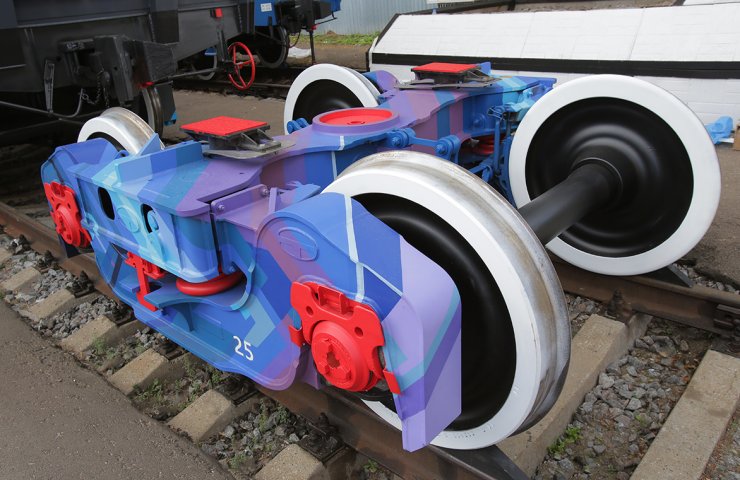 Uralvagonzavod (part of the Concern UVZ is a part of the State Corporation Rostec) began preparations for the production of a stamped-welded bogie model 18-9999: a new section was created and robotic welding complexes were introduced. This is a completely new product not only for the Nizhny Tagil enterprise, but for the entire domestic freight car building industry. The first such cart at UVZ will be manufactured by the end of this year.

After manufacturing, two gondola cars on new bogies will go to qualification tests, and then to pilot operation. Long-term plans include serial production of rolling stock using bogies of model 18-9999.

The design documentation for the trolley was developed by one of the Russian companies. For the manufacture of some units at the enterprise, other subdivisions of the carriage and mechanical assembly industries are involved.

New bogies will be more expedient to use in rolling stock, which requires high speeds. These are, for example, fitting and universal platforms, including those intended for piggyback transportation and other specialized composition, the production of which is being actively mastered by Uralvagonzavod. In the meantime, bogie 18-9999 is installed under the gondola car, since this type of freight rolling stock has the most difficult and critical operating conditions.

Gondola car 12-196-04 on bogie 18-9999 was first presented at the International Railway Salon PRO//Dvizhenie.EXPO in August last year, and in December it received a certificate. Now the task of Uralvagonzavod is to obtain a certificate for a stamped-welded bogie of its own production, in order to subsequently produce an already whole product.

- Uralvagonzavod again sets the trend in the Russian freight car building, mastering the new generation bogie. In the future, we are planning a serial production of bogies of model 18-9999 with maximum automation of their production, - says Kirill Tomashchuk, Deputy General Director for Civilian Products of Uralvagonzavod Concern.

Recommended:
Ukrainian metallurgists are eagerly awaiting the abolition of mutual duties on steel by the EU and the USA
ArcelorMittal Kryvyi Rih has updated its fleet of special equipment
Vestas will build the world's largest wind turbines with a height of 260 meters
On this topic
Krukovka Carriage Works disclosed the findings of the company's repeated internal audit
Production of wagons in Russia fell by a third
Russian feds spoke in support of the Ukrainian Interpipe
Russian Railways supported the decision to renew duties on steel from Ukraine
Uralvagonzavod implement a system to protect the cars from fraud
Rostec to manufacture composites for serial su-57
Add a comment
Сomments (0)
News Analytics
Georgia's economy shrinks by 11.5% in January26-02-2021, 21:21
Ukraine retained its position in the world ranking of steel producers and rose26-02-2021, 15:52
ArcelorMittal has raised prices for galvanizing for the European market to 90026-02-2021, 13:23
The European Commission initiated a new investigation on steel imports to26-02-2021, 13:22
A rally of workers of the stopped shipyard was held in Mariupol26-02-2021, 12:34
Increase in prices is forecasted in the markets of steel raw materials -26-02-2021, 09:25
Troy ounce of gold will drop $ 500 in two years - Fitch25-02-2021, 18:29
Global iron ore production growth to outstrip cumulative production in India23-02-2021, 10:22
Fitch Ratings Warns of “Shocking Impact” on Fossil Fuel Exporters18-02-2021, 14:44
Raw material prices rise by about 10.5% in January 2021 - Deutsche Industriebank12-02-2021, 10:48
Sign in with: