Three pilot parts of the HIP turbine rotor will be installed at the Akkuyu NPP under construction in Turkey. 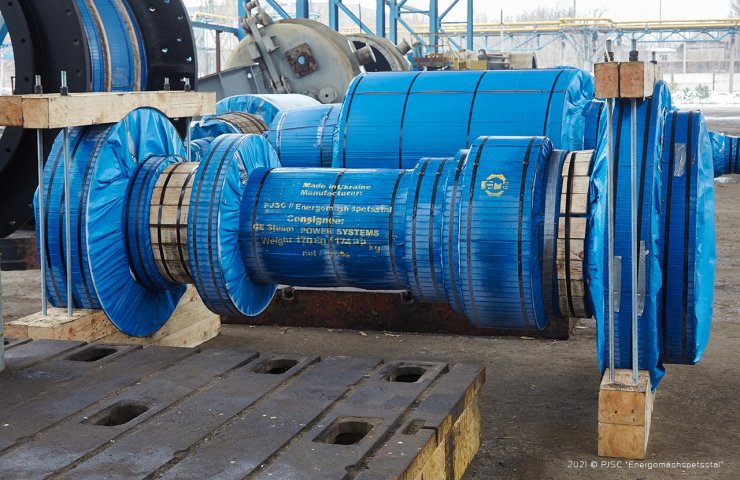 Energomashspetsstal shipped parts of the high-pressure turbine rotor, manufactured by order of the American company General Electric. We are talking about three prototype parts of the HIP turbine rotor: the shank, part of the rotor and the disc. The total weight of the batch is 90 tons. The finished products will be installed at the Akkuyu NPP under construction in Turkey.

The contract for the supply of blanks was signed in 2020. According to the signed contract, 16 liners and discs for the Akkuyu NPP with a total weight of 577.6 tons will be manufactured by the order of General Electric in 2021.

General Electric is an American diversified corporation, a manufacturer of various types of equipment, including power plants (including nuclear reactors), locomotives, gas turbines, aircraft engines, medical equipment, photographic equipment and much more. Since 2016, the company's headquarters has been located in Boston, Massachusetts (USA).

Recommended:
Interpipe plans to raise $ 300 million through a new issue of Eurobonds
Metinvest's enterprises and Metinvest Green Center planted 400 trees in Zaporozhye as part of Greening the Planet eco-initiative
Manufacturers will begin to create their own car parks so as not to overpay to private traders - expert opinion
On this topic
Energomashspetsstal cast ingot weighing 415 tons for the Turkish nuclear power plant "Akkuyu"
Turkish nuclear scientists carried out at Energomashspetsstal acceptance of blanks for power unit
Energomashspetsstal successfully handed over to the customer 8 covers for the steam generators of
Energomashspetsstal updated the certificate of the manufacturer of blanks for the nuclear industry
Energomashspetsstal successfully passed General Electric qualification
Energomashspetsstal will produce on the order of General Electric two qualifying billet
Add a comment
Сomments (0)
News Analytics
Ukraine and the United States are deepening cooperation in the trade and20-04-2021, 20:46
Nikopol pipe plant "Centravis" is approved as a supplier of the Chinese20-04-2021, 20:10
The capacity of the domestic steel market in Ukraine in January-March decreased19-04-2021, 10:33
In Russia, there is an exuberant demand for agricultural machinery19-04-2021, 10:24
Iran is satisfied with the reaction of the world community to 60% enrichment of18-04-2021, 13:24
World Steel Association predicts a good year for metallurgists15-04-2021, 18:19
World Steel Association defines green steel and its variations12-04-2021, 13:14
China unlikely to cut steel capacity in 2021 due to high steel prices07-04-2021, 12:11
Scrap metal market at the beginning of April02-04-2021, 11:10
Rising Chinese Prices Fueled Rising Global Steel Prices - MEPS25-03-2021, 18:54
Sign in with: