During the New Year's congratulations to the Ukrainian president, all metallurgists of the country were introduced by the shift manager of the Interpipe Steel plant Andrey Sholkov. 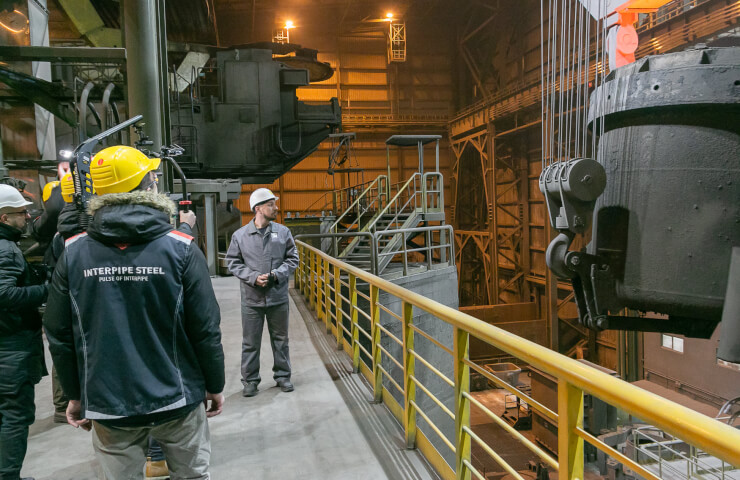 In the New Year's greetings from President of Ukraine Volodymyr Zelensky on the occasion of the New Year 2022, Ukrainians took part, distinguished themselves by socially important activities, outstanding achievements and showed exceptional results. A representative of the country's metallurgical industry is also on the list of invitees.

"Those who melt metal, and those who build bridges from it to connect Ukraine", - was said in the New Year's greetings. And all the metallurgists of the country were introduced by the chief of the shift of Interpipe Steel Andrey Sholkov.

The Interpipe press service reported that Andrey Sholkov is one of those who launched the Interpipe Steel electrometallurgical plant almost 10 years ago.

“He built a career at the plant, and today, together with his colleagues from Danieli, he helps to establish the work of similar enterprises around the world,” noted the press service of Victor Pinchuk.

Финансовая аналитика, прогнозы цен на сталь, железную руду, уголь и другие сырьевые товары. More news and analytics on Metallurgprom telegram channel - subscribe to get up-to-date market information and price forecasts faster than others.
Сomments
Add a comment
Сomments (0)
On this topic
Italians will help Ukraine decarbonize steel production
ArcelorMittal Kryvyi Rih is implementing a project for the reconstruction of the gas cleaning
Yuzhmash told whether it is possible to launch reusable rockets from the Black Sea
Interpipe withdrew from the JV with the French due to tariff restrictions on the EU steel market
The Antimonopoly Committee launched a case against the Metallurg Zaporozhye football club
The plant "Interpipe Steel" reduced the January steel output by 8%
Recommended:
The pipe metallurgical plant in Nikopol continued to work after a short stop
EU extends anti-dumping duties on cold rolled steel from China and Russia
The European Union has sharply increased purchases of Russian titanium
News Analytics
Australia and the UK aim to catch up and overtake China in the battery metal26-11-2022, 22:37
The United States imposed a ban on the import and sale of equipment from26-11-2022, 22:31
The pipe metallurgical plant in Nikopol continued to work after a short stop26-11-2022, 22:52
The state will not support the export of metals from Russia - Ministry of25-11-2022, 13:18
ArcelorMittal Kryvyi Rih suspends production due to shelling of energy25-11-2022, 12:04
Platinum market to face shortage next year - WPIC22-11-2022, 18:25
Global steel demand falls and will fall by 2.3% in 2022: WorldSteel19-10-2022, 23:12
Iron ore prices fall to 11-month low15-10-2022, 10:36
China production cuts in winter will give limited boost to steel markets -15-09-2022, 10:09
Steel prices may rise as manufacturers stop production11-09-2022, 14:06
Sign in with: