Metinvest shareholders Rinat Akhmetov and Vadim Novinsky, who arrived in Mariupol, announced an increase in the salaries of the company's employees in March and April. 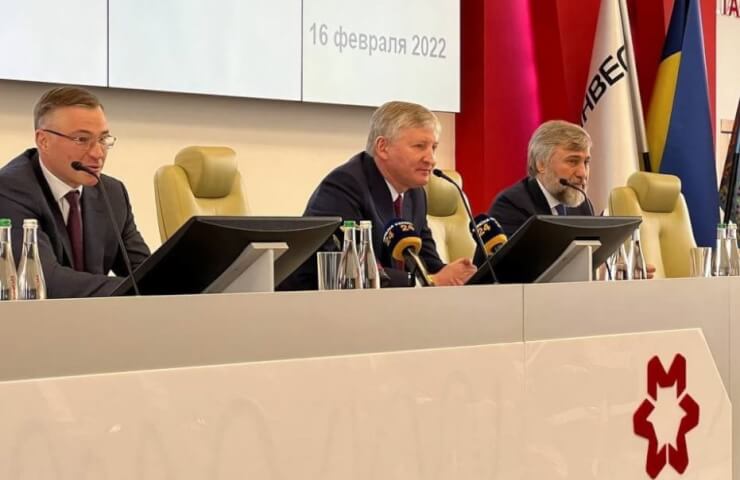 Netherlands mining and metals group Metinvest B.V. (Metinvest) of Ukrainian businessmen Rinat Akhmetov and Vadim Novinsky announced an increase in wages for workers in Ukraine from March 1. It is not said how much exactly the payments will be increased, but it is stated that by the end of 2022, labor costs in the group as a whole will increase by 10%.

The salary increase will not yet affect the managers and management personnel of enterprises, as well as employees of the management company, and salary growth will be differentiated. Metinvest monitors the level of inflation in Ukraine and the outflow of personnel, so the decision to revise salaries will be verified, the company said.

Let us remind you that today both of its shareholders arrived at the company's plants in Mariupol. Rinat Akhmetov and Vadim Novinsky walked around the pier repaired by Metinvest on the shore of the Sea of ​​Azov and held a series of meetings.

“We will do everything to ensure that Mariupol develops, and Mariupol residents have a decent job, a decent salary and a happy life,” Akhmetov said, promising to invest $1 billion in city enterprises this year.

Novinsky recalled that increasing social guarantees for workers is a traditional practice for the company. “Metinvest retains and attracts new employees with the help of various motivation systems, among which is the level of wages, which exceeds both the average Ukrainian and the industry,” he said.

The press service of Metinvest noted that the company's employees are the highest paid in the mining and metallurgical industry of Ukraine. “Salaries at Metinvest are 5-8% higher than those of competing companies,” the press service said, adding that the outflow of technological personnel in the Metinvest group does not exceed 8.5% on average, which is in line with normal mining practice. metallurgical industry.

Финансовая аналитика, прогнозы цен на сталь, железную руду, уголь и другие сырьевые товары. More news and analytics on Metallurgprom telegram channel - subscribe to get up-to-date market information and price forecasts faster than others.
Сomments
Add a comment
Сomments (0)
On this topic
Metinvest to raise wages for workers in Ukraine from May 1
ArcelorMittal Kryvyi Rih will raise salaries by 10% in two stages if it receives the consent of the
ArcelorMittal Kryvyi Rih management and trade unions agreed to come to an agreement
Metinvest, together with the Rinat Akhmetov and Vadim Novinskoy Foundations, donated 3,200 COVID-19
Metinvest announced plans for mass layoffs
ArcelorMittal Kryvyi Rih increases salaries of its employees
Recommended:
China's iron and steel producer price index up 5.6% in April
Steel prices in the UK rose by 50% after the start of the Russian special operation in Ukraine
Dneprospetsstal restarted stainless steel production in Zaporozhye
News Analytics
The largest producer of titanium raw materials in Ukraine OGCC will sell25-05-2022, 20:48
Glencore accused of bribery in London pleads guilty in the US25-05-2022, 10:44
Swiss oil and gas equipment manufacturer Sulzer leaves Russia24-05-2022, 13:08
BIR: European Commission's decision on scrap metal will be the most tragic24-05-2022, 11:41
Rejection of Russian palladium destroys markets24-05-2022, 11:41
US steel market sentiment becomes more price neutral05-05-2022, 10:15
The global high-strength steel market will grow steadily by 5% annually for the04-05-2022, 08:45
China steel inventories hit 13-month high amid COVID-19 outbreak30-04-2022, 16:38
Slowdown in global auto sector affects steel prices27-04-2022, 12:36
World alumina production reaches a record 138 million tons21-04-2022, 09:54
Sign in with: