In addition to increasing wages, the administration of the metallurgical enterprise promises a one-time additional payment in the amount of the official treasure for the 87th anniversary of the Kryvyi Rih steel plant. Trade unions are categorically against such low wage growth and are demanding a 30% increase in wages. 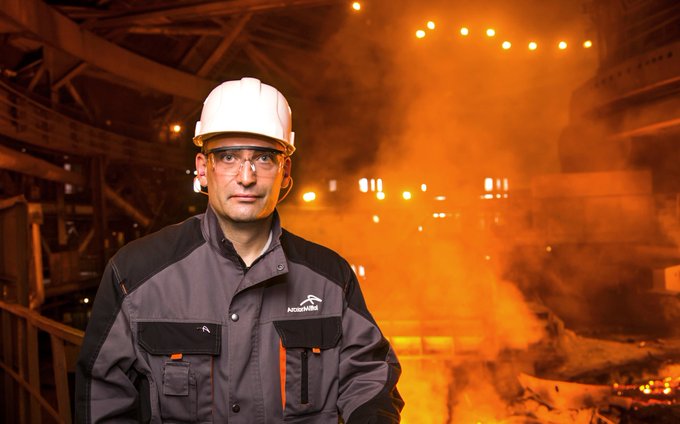 Following a meeting with trade union representatives, ArcelorMittal Kryvyi Rih announced on Friday a proposal to raise wages to all employees by at least 10% in two stages: by 5% on October 1, 2021 and by at least another 5% at the beginning of the second quarter 2022 year. Salaries for some categories of workers will also rise by a larger percentage, up to 30%, which will correct the imbalances found by unions after the last increase in May 2021.

To celebrate the company's success in 2021 and celebrate the 87th anniversary of the enterprise, the company will pay its employees the 14th salary: 50% of the base salary by Enterprise Day on August 4th and another 50% at the end of the year.

"ArcelorMittal Kryvyi Rih" suggested to the representatives of the trade unions who participated in the meeting that over the next three years, from 2022 to 2024, the company will increase the wages of its employees twice a year, in May and October, by a percentage not lower the official inflation rate for the previous year. During this period, the annual May increase is guaranteed to be equal to last year's official inflation rate plus 1% minus the percentage of wage increases in October last year. In October each year during this period, the increase will equal at least 50% of the forecasted inflation rate for the current year plus 1%.

An official response from the leaders of all trade unions, which will make it possible to implement this proposal without delay in a few days, is expected next week.

“Financial stability is important for our employees. With this in mind, we hope to agree with the unions on a three-year action plan that will enable everyone to plan their expenses and incomes in a transparent and predictable way, ”said Mauro Longobardo, CEO of the company.

The company proposes to fix agreements for three years in order to establish clear rules for everyone, ensure constant growth of production and create conditions for a steady inflow of investments, which are urgently needed to modernize production facilities, improve labor safety and reduce environmental impact, as well as concentrate on other urgent issues for the work collective.

“I do not share the“ we versus them ”way of thinking that they are trying to impose on our employees, I personally want to reach agreement with all representatives of the workforce. For me, all 21,000 employees are one team, with common successes and common challenges. The markets were good for us in the first half of this year and we would like all of our employees to be able to celebrate this success, ”Longobardo said.

“Our goal is the sustainable performance and growth of our company, as well as the well-being and motivation of all our employees. We hope that the trade unions operating at the enterprise will share our conviction that it is dialogue, and not personal interests and manipulations that delay the adoption of agreed decisions in the interests of ordinary workers, first of all, that is the way to achieve these goals in the interests of the company and the collective. " said Yulia Chermazovich, director for sectoral relations and social development, who leads the negotiation process with trade unions.

At the same time, the trade unions of the PMGU PJSC "ArcelorMittal Kryvyi Rih" have already responded by posting on their Facebook page, saying that they strongly disagree with the proposal of the enterprise management dated 07/30/2021 to raise wages by unreasonably low percentages.

The trade union demanded that the administration of ArcelorMittal Kryvyi Rih adhere to the agreements reached and provide the trade union side for approval with a draft order on a differentiated increase in salaries for all employees of ArcelorMittal Kryvyi Rih PJSC, Stol Service LLC and Foundry-Mechanical Plant LLC from 01.10. 2021 at a rate of 10 to 30 percent, indicating that high percentages of salary and tariff increases would apply to blue-collar occupations proposed by trade unions and agreed by the administration.

“If the management makes a decision to raise the level of wages without agreement with the trade unions, they will again violate the terms of the collective agreement of the enterprise and the norms of Ukrainian legislation. The situation when exactly in a profitable year, given a favorable situation on the world steel and raw materials market, the employer is not ready to raise salaries higher than the official inflation rate and is trying to fix such conditions for three years in advance with restrictions on the constitutional rights of the labor collective does not look like concern for the welfare of hired personnel ", - noted in the trade union.

Финансовая аналитика, прогнозы цен на сталь, железную руду, уголь и другие сырьевые товары. More news and analytics on Metallurgprom telegram channel - subscribe to get up-to-date market information and price forecasts faster than others.
Сomments
Add a comment
Сomments (0)
On this topic
The Ukraine-EU summit may be postponed again - the head of the European Commission went into
"Naftogaz of Ukraine" in February reduced the price of gas for industry by 15%
Metinvest group is required to consider the opinion of big business in the development of bills
Belanto Trade accused Dmitry Firtash of tarnishing the company's image to eliminate a competitor
Ukraine accepted the offer of the Mask on the free ventilators
Vodafone, DTEK and Ericsson announce the start of the Smart Factory project based on 5G
Recommended:
Naftogaz launches new arbitration against Gazprom
The Baltic States plan to increase the capacity of offshore wind farms by seven times by 2030
Russia has updated the list of strategic minerals to include rare earth metals
News Analytics
Moody's changed the outlook for the global mining industry to26-09-2022, 19:04
Russia may increase taxation of oil, gas, coal and fertilizers26-09-2022, 15:58
UK steel production hits record low this year26-09-2022, 15:07
Ukrainian court invalidated sale of Ferrexpo Plc shares in 200222-09-2022, 12:45
EU Commission not doing enough to save aluminum industry - associations21-09-2022, 11:07
China production cuts in winter will give limited boost to steel markets -15-09-2022, 10:09
Steel prices may rise as manufacturers stop production11-09-2022, 14:06
IREPAS: The global long products market is in a "dramatic situation"10-09-2022, 20:49
Steel prices are unlikely to rise significantly in the near future - analysts02-09-2022, 22:58
Steel prices may move up on new data from China31-08-2022, 12:19
Sign in with: