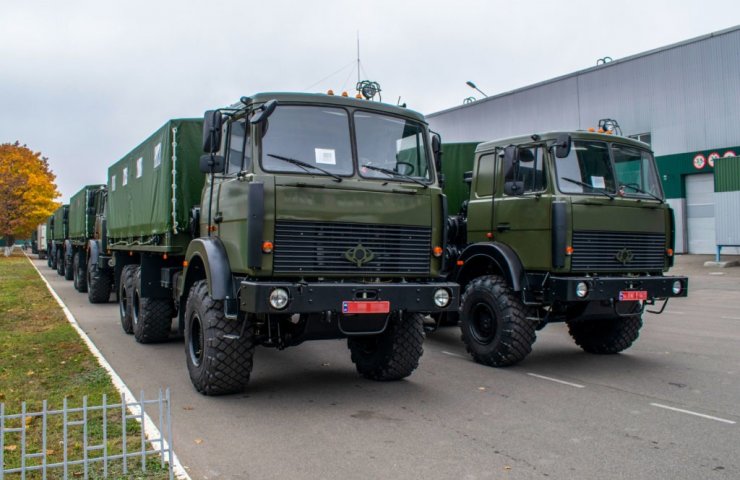 SE "car Assembly plant № 2 of JSC "AK "Bogdan motors" put in the Mat the next batch of cargo vehicles "Bogdan-63172", whose production was the occasion to verify the NEB and the initiation of proceedings against the head of the company Oleg Gladkovsky.

"the Plant, as in previous years, continues to run ahead of the State defense order giving the parts a reliable new vehicles to provide combat and logistical needs of the APU in areas of the OOS, and in the rear," - said the press service of "Bogdan motors".

the company stressed that all contracts under the state defense order were carried out by the enterprise ahead of time. While the car during use demands from the military and the guarantee of treatment had the minimum number for this volume.

the Detectives NAB suspected head of "Bogdan motors" Gladkovsky of committing a crime under part 2 St. 364 St. 366-1 of the Criminal code of Ukraine. According to the investigation, he secured the inclusion in the state defense order and subsequent purchase by the state budget freight vehicles MAZ 6317 (Bogdan 6317) at inflated prices from a subsidiary company "car Assembly plant №2".

Recommended:
Donbasenergo announced the possible bankruptcy of the company and mass layoffs
Ukrainian metallurgists summed up the results of the industry in the first half of 2021
Novokramatorsk Machine Building Plant has built a "compact" five-meter mine hoist
On this topic
The ship that brought coal to Ukraine from Colombia called at the Russian port of Ust-Luga
Gladkovsky continued his hunger strike after leaving the jail
Bogdan Motors is outraged by accusations of overpricing
The future of electric vehicles is being shaped in China
Samsung SDI and Volvo to jointly develop batteries for electric vehicles
Global steel market for cars: forecast up to 2026
Partner news
Сomments
Add a comment
Сomments (0)
News Analytics
Ukroboronprom confirmed the intentions of Antonov State Enterprise to start25-07-2021, 11:15
Gazprom reacted to the refusal of Naftogaz of Ukraine to buy Russian gas with25-07-2021, 11:00
Iron ore has become a strategically important raw material for defense -24-07-2021, 11:06
Vietnam overtook Ukraine in the world ranking of steel-producing states24-07-2021, 11:38
Port "Yuzhny" has set a record for the speed of loading pig iron on a ship24-07-2021, 10:10
On the regional markets of metallurgical products, prices are balancing in a22-07-2021, 16:22
Demand for armaments will ensure a stable growth of armored steel sales by 4%20-07-2021, 10:10
Protectionist Measures Support European Steel Prices Despite Summer Lull19-07-2021, 11:02
Positive price growth is observed in the markets for metallurgical products16-07-2021, 14:12
European steel market is in confusion: price growth has slowed down, but no one21-06-2021, 17:40