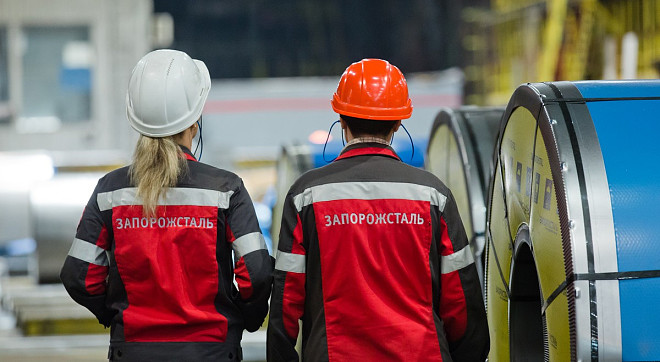 In November 2019, Zaporizhstal smelted 293.2 thousand tons of steel, which is 11.2% less compared to November 2018. Since the beginning of the year (January-November), steel production at the enterprise has decreased by 2.3%, amounting to 3 million 674 thousand tons.

PJSC "Zaporizhstal" is a full-cycle metallurgical enterprise, which occupies a leading position in the production of steel in Ukraine, the volume of exports of metal products to more than 50 countries of the world, as well as tax deductions. It is part of the Metinvest group of companies.

Recommended:
European Commission: Ukraine should continue investing in renewable energy
Elon Musk called on mining companies to increase production of Nickel
The Ministry of energy of Ukraine will continue the work on liquidation of unprofitable state-owned mines
On this topic
General Director of "Zaporizhstal" steel works appointed Alexander Mironenko
"Zaporozhstal" increased production of iron and steel
Head of Zaporizhzhya CI: Zaporizhstal owners are terribly concerned about Shurma's departure
World steel production in September fell by 0.3%
Metinvest changes Zaporizhstal CEO
Запорожсталь сократила производство чугуна и стали
Add a comment
Сomments (0)
News Analytics
"Metinvest " in May increased revenue by 13.6% versus April, debt increased by04-08-2020, 18:49
Metinvest's Kryvyi Rih GOKs will pay double taxes to the local budget until01-08-2020, 14:16
US Steel will not restart blast furnaces in Indiana until the end of this year01-08-2020, 14:02
ThyssenKrupp closed the deal for the sale of the elevator business01-08-2020, 13:53
Minister for Strategic Industries of Ukraine inspected YUZHMASH workshops31-07-2020, 09:49
Steel begins to lose the battle with the aluminium due to the growing27-07-2020, 17:08
Gold may reach a record high in 201114-07-2020, 12:47
Steel prices in southern Europe are rising, despite weak demand23-06-2020, 10:54
Analysts expect strong demand growth for steel in China10-06-2020, 11:57
Global steel consumption in 2020 will be reduced by 6.4% - Worldsteel04-06-2020, 13:53
Sign in with: