the Company included in the financial-industrial group of businessman Konstantin Zhevago has received orders for a self-propelled chassis KrAZ-5401НЕ (4x4) from a renowned foreign ponastroila. 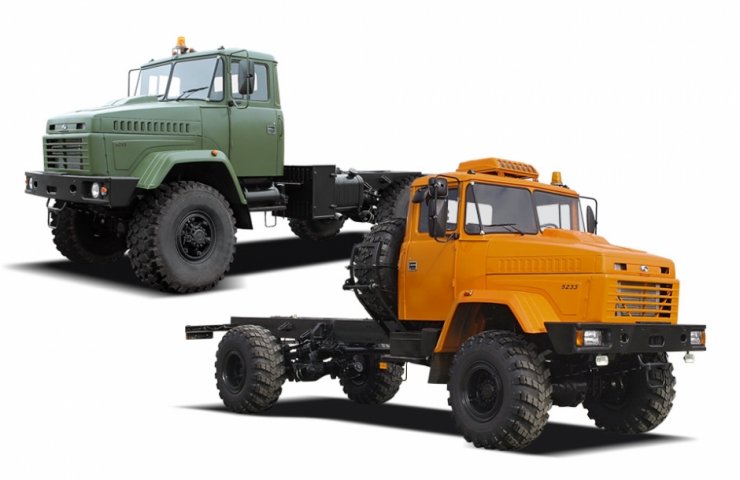 Kremenchuk car factory "KrAZ" has received an order for the delivery of a self-propelled chassis 4×4 from one of our long-term partners — eminent foreign ponastroila, whose name in the press-service of the company chose not to disclose.

As explained in the "KrAZ", wheel sets of the enterprise was once again chosen as the base for the production of armoured vehicles with mine protection. The simplicity and reliability of basic components, the positive experience of operating in the most demanding conditions make the chassis KrAZ universal platform for various modifications of armored vehicles.

Car chassis KrAZ-5233НЕ terrain is designed for mounting installations for industrial use, as well as special add-ons to technological equipment used for the elimination of accidents, fires and other man-made and natural disasters, the delivery of people and life support modules in the conditions of difficult terrain.

Earlier it was reported that the Kremenchug automakers have developed all-wheel drive chassis KrAZ-5401НЕ (4x4), which was installed combat vehicle BM-21 "Berest".

"Design, construction and testing of this equipment were not funded by the state and for grants, and own funds of KrAZ. Accepted joint decisions of the relevant security agencies on the positive outcome of the testing equipment KrAZ, and when it comes to procurement preferences provide MAZ", - told in January 2020 in the company.

Vast engineering experience and highly skilled technical staff allow "KrAZ" cooperate on an equal footing with foreign partners in the joint development of armored vehicles and the adaptation of domestic chassis, the specific requirements of the manufacturer of the add-in.

AvtoKrAZ is the only Ukrainian manufacturer of heavy trucks on a full cycle, produces 33 basic models, more than 350 modifications and 1500 models of automotive vehicles "KrAZ" for all sectors of the economy and the APU. The company is in the financial-industrial group of businessman Konstantin Zhevago.

Recommended:
Supervisory Board of Novokramatorsk Machine Building Plant dismissed the chairman of the board
Rolls-Royce says demand for luxury cars is recovering
The Ministry of Energy of Ukraine announced 50 million hryvnias of "illegal expenses" at the Nadezhda mine
On this topic
Zaporozhye plant of ferroalloys informed about the fulfillment of the plan production and
Ukrainian KrAZ conquer Africa: the company recognized this market as a priority
Уникальный многофункциональный специализированный автомобиль пополнил автопарк Полтавского ГОК
"AvtoKrAZ" has shipped the new Ferrexpo KrAZ-5401H2
"Bogdan motors" has put APU in a new batch of trucks, "Bogdan-63172" (Video)
Regional branches of Ukravtodor received updated KRAZ
Add a comment
Сomments (0)
News Analytics
COVID-19 pandemic plunges global labor income by $ 3.5 trillion24-09-2020, 20:51
The price of electricity for Ukrainian metallurgists turned out to be twice as24-09-2020, 20:47
The 30 millionth LADA car rolled off the assembly line of AVTOVAZ (Video)24-09-2020, 18:12
What is billionaire Yaroslavsky building at the Dnipro airport?24-09-2020, 18:40
One step away from bankruptcy: car builders demand from the Ukrainian24-09-2020, 18:48
Iron ore prices to surpass six-year high soon16-09-2020, 10:32
World Oil Demand Peak May Be Over - BP15-09-2020, 09:05
China expands car market capacity by increasing demand for steel and metals11-09-2020, 10:56
Prices continue to rise in the long and flat steel markets08-09-2020, 14:25
Difference between ferrous and non-ferrous metal28-08-2020, 13:45
Sign in with: