the Corresponding statement the President made during a visit on Kryukovsky car-building plant, which for more than a year seeking from Ukrzaliznitsi orders for trains and cars. 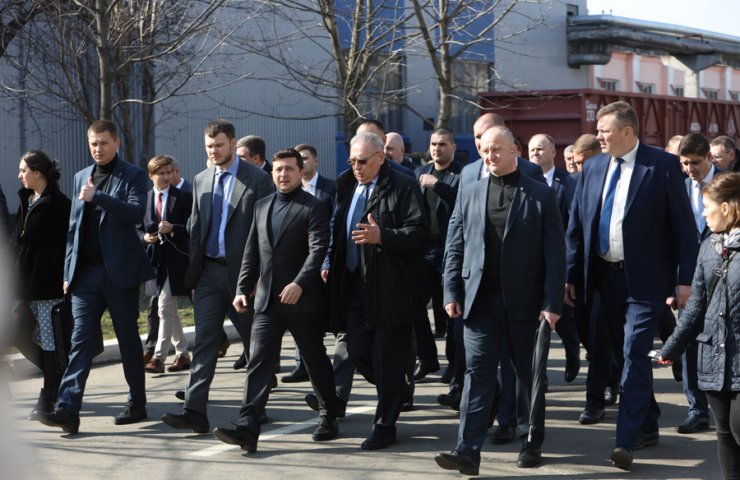 the President of Ukraine Vladimir Zelensky said that the government should develop a programme to support Ukrainian industry. The head of state said at the briefing following the visit to Kremenchug at JSC "Kryukov wagon works" (kvsz).

"I will consult with Prime Minister of Ukraine, to do at least what I said yesterday - the Vice-Minister of industry and trade, and will do the Ministry. Now, I think we are on the right track. We need such a Ministry, we need to develop a program of support for the Ukrainian industry," said Zelensky.

State orders for the domestic enterprises should become the impetus for expansion in foreign markets and the Ukrainian enterprises and the state as partners and allies. This statement was made by infrastructure Minister Vladislav Crickley at the briefing.

about the situation with the proper use of the exception from the list of enterprises eligible for capital repairs to extend the service life of passenger cars plying in the message, Vladislav Crickley noted that the situation will be resolved soon - the appropriate treatment is already prepared.

Minister of infrastructure said that depending on the availability at Ukrzaliznytsia additional financial resources, implemented a plan-or at least a wider plan of cooperation with proper use.

"minimum Plan - we're talking about 2-3 diesel trains this year and up to 100 passenger cars, but now finalizarea financial plan of Ukrainian Railways, will proceed from specific numbers. I would like to provide a large renovation of the rolling stock and diesel trains and to do so in Ukrzaliznytsya appeared additional financial resources. Mr. President, we hope that in the budget the amount of compensation from Gazprom, a certain portion would go custom for the Railways," said Crickley.

As coalsales earlier, in July 2019 Kryukovsky car-building plant has filed a lawsuit against Railways at 1.4 billion hryvnia, and argues that the monopoly by their actions bring the plant to bankruptcy.

the press service of Kryukiv railcar reported that Ukrzaliznytsia has violated four of the contract for the supply of a 54 passenger coaches, not paid for 11 passenger cars, received in December 2018 and January 2019, and also did not pay advance payments under contracts. In addition, Ukrzaliznytsia does not accept ready-made cars in accordance with the concluded agreements.

Recommended:
Bill on increasing rent payments and excise taxes submitted for consideration to the Verkhovna Rada
In Ukraine, police were accused of involvement in the theft of coal from trains on an especially large scale
China's Machinery Sector Operating Income Increases 43 Percent
On this topic
Kvsz: uz refuses to buy Ukrainian diesel trains
Zelensky suggested Goncharuk make unbundling economy Milovanova
Railways in 2020 will buy the 40 locomotives General Electric
Kryukovsky railway car building works connected Union bosses to fight for government contracts
Ukrainian carriers will receive an additional 5000 Polish permissions
Top Manager kvsz called calls privacy office minifrastruktury to Hyundai "unpatriotic"
Add a comment
Сomments (0)
News Analytics
Demand for scrap metal in Ukraine exceeds supply by 5%19-06-2021, 11:45
Ukraine resumed sea purchases of gasoline due to restrictions on supplies from19-06-2021, 11:38
Installation of the first mine hoisting machine of Uralmashzavod began in Altai19-06-2021, 11:46
European designers have learned to inflate steel structures that could be a18-06-2021, 17:42
In Ukraine, police were accused of involvement in the theft of coal from trains18-06-2021, 17:51
Vaccinations fuel demand for platinum - World Platinum Investment Council08-06-2021, 12:55
Sharp price growth continues in the rolled metal market - Ukrpromvneshexpertiza08-06-2021, 11:04
Analysts note overheating of the global scrap metal market01-06-2021, 13:28
Hydrogen-fueled steelmaking could be competitive after 2050 - McKinsey19-05-2021, 14:22
Steel raw material prices are skyrocketing across the board18-05-2021, 12:34
Sign in with: