On the basis of the "Zaporizhstal" steel works held a round table on the functioning of the Integrated management system, implementation of lean manufacturing tools. 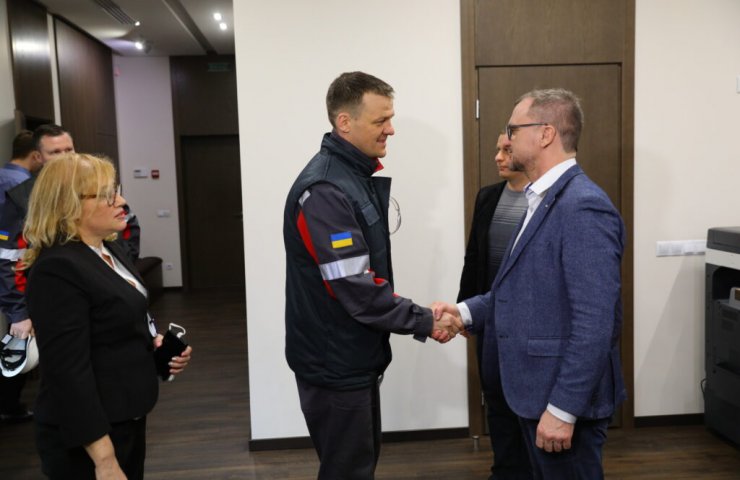 March 11, 2020 in the framework of the working visit to Zaporozhye plant "Zaporizhstal" was visited by the member of the Board of JSC "Ukrzaliznytsya" Frank buresh. General Director of "Zaporizhstal" Aleksandr Mironenko discussed with the delegation the prospects of cooperation in the field of rolling stock, exchange of experience on implementation of lean production tools.

Recall from 2017 in the framework of the program of modernization of the locomotive fleet "Zaporizhstal" performs the re-engine of the rolling stock of the enterprise. During this period, in partnership with the Zaporozhye and Nikolaev Teplovozoremontny plants remoteserver five series diesel locomotives TGM-4. For these purposes, "Zaporizhstal" steel works allocated more than 50 million hryvnia. The sixth locomotive was fully renovated with own resources of the enterprise, the works allocated UAH 7.4 million.

Project confirmed its efficiency: fuel consumption is reduced to 12%, the consumption of engine oil – up to 60%. By replacing the engine to a more modern, manufactured by Cummins (USA), significantly reduced the concentration of co and nitrogen oxide in the exhaust gases.

on the basis of the "Zaporizhstal" steel works held a round table on the functioning of the Integrated management system, implementation of lean production tools. Among the participants – representatives of "Ukrzaliznytsia", Lviv railway Lviv locomotive repair plant, others. The members of the delegation noted the high level of implementation of lean manufacturing practices at the plant.

Note, by the end of 2019 under the programme for operational improvements, the works has reached more than $ 36 million savings.

Финансовая аналитика, прогнозы цен на сталь, железную руду, уголь и другие сырьевые товары. More news and analytics on Metallurgprom telegram channel - subscribe to get up-to-date market information and price forecasts faster than others.
Сomments
Add a comment
Сomments (0)
On this topic
"Zaporizhstal" changing the engines of Russian locomotives on the us for fuel economy
Ukrzaliznytsya plans to overhaul the Czech trains in the country
Ukrzaliznytsia has started the selection of candidates for the delivery of electric locomotives
Zaporizhstal intends to sign a Memorandum with the Zaporizhzhya Regional State Administration on
Zaporizhstal in January increased the production of iron and steel compared with December
General Director of "Zaporizhstal" steel works appointed Alexander Mironenko
Recommended:
The United States refused to comply with the decision of the WTO on tariffs on steel and aluminum
Taiwan bans stainless steel exports to Russia and Belarus
Europe's passenger car market records its worst year since the turn of the century
News Analytics
EU Green Deal should encourage investment in mild steel projects: Eurofer02-02-2023, 16:32
Belarusian steel plant to operate at full capacity from February02-02-2023, 16:56
British Steel considers cutting up to 1,200 jobs at Scunthorpe02-02-2023, 11:50
Electric vehicles will play a key role in US aluminum production growth - Norsk01-02-2023, 12:17
The former president of Motor Sich was accused of aiding terrorists01-02-2023, 11:39
European stainless steel producers ready to raise prices31-01-2023, 16:16
S&P: Russia will continue to dominate the steel export market in the Black05-01-2023, 11:22
Fitch Analysts Predict Big Drop in Global Steel Consumption This Year14-12-2022, 13:59
Analysts predict 5% annual growth in the iron casting market through 203006-12-2022, 12:44
Commodity prices will fall, metals quotes will rise slightly - Focus Economics28-11-2022, 13:28
Sign in with: