Saturday morning thousands of workers "ArcelorMittal Kryvyi Rih" has formed the queue behind a special pass to travel on public transport. 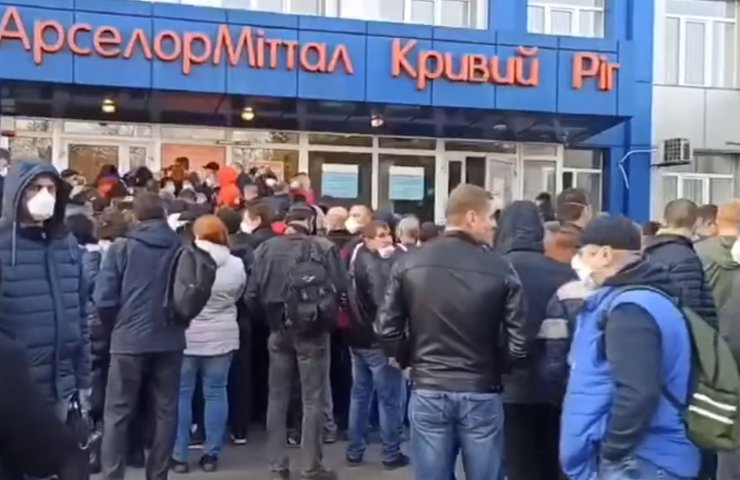 Police Dnipropetrovsk region reported that they received a report on violations of the rules of quarantine, and they made an administrative Protocol against the head of personnel of company "ArcelorMittal Krivoy Rog" according to the article 44-3 of the administrative code (violation of the rules of quarantine). The sanction of article provides for a fine. The Protocol will be referred to the court for adoption of the lawful decision.

the press service of the plant reported that on Saturday, April 4, at the time of issuance of special permits to employees of PJSC "ArcelorMittal Kryvyi Rih" provided in the premises of disinfection and compliance with all rules in the terms of the quarantine.

Notes that "ArcelorMittal Kryvyi Rih" got the special permits of the established sample on Friday evening, April 3, and their results should be carried out individually in each. The transfer of the document to third parties is prohibited.

"the Company has been in circumstances where for two days, until April 6, it is necessary to transfer employees 21 thousand special passes," said the company.

"After 40 minutes, all participants received them and went, freeing up space. Further, the results forms were organized through the shops to avoid congestion of personnel. Thus, the administration took on additional responsibilities to implement the issuance of special permits through the heads", - said the company.

Videos from the event were published by users of social networks on Saturday, April 4.

Recommended:
YUZHMASH company congratulated SpaceX on the successful launch of the spacecraft Crew Dragon
Все инфицированные корнавирусом рабочие Днепровского меткомбината выздоровели
2000 work of Ukrainian thermal power plants out of the 50-day isolation mode
On this topic
Minister Ariel presented to the staff of SE NNEGC "Energoatom" the new head
The Venice Commission has recommended Ukraine to protect Russian to change language law
A new lawsuit for "Gazprom": what does "Naftogaz" in the Stockholm arbitration?
Победителями проекта «ЭКОГОРОД» от «АрселорМиттал Кривой Рог» стали 11 инициатив горожан
Cамый грязный воздух в Украине в Днепре
АрселорМиттал Кривой Рог опроверг заявления СБУ о превышении предельного уровня радиации
Add a comment
Сomments (0)
News Analytics
Corum Group of Rinat Akhmetov and the Czech investment company signed a05-06-2020, 12:53
The coalition "enough is Enough grass Krivoy Rog" visited ArcelorMittal checking05-06-2020, 11:57
Reuters: US will punish all those involved in the construction of "Nord stream04-06-2020, 13:39
The Dnieper metallurgical plant launched blast furnace No. 204-06-2020, 12:41
The South Korean Prosecutor's office demands to arrest the Vice-President of04-06-2020, 11:06
Global steel consumption in 2020 will be reduced by 6.4% - Worldsteel04-06-2020, 13:53
American steelmakers are faced with an unexpected problem associated with the14-05-2020, 09:09
Relying on the incentives, Chinese steelmakers increase production30-04-2020, 10:20
The rapid recovery of the steel market in China leads to a drop in iron ore22-04-2020, 13:11
Platts: steel Market of China will not be able to recover until the second half20-04-2020, 12:25