Contradictory situation in the commodities market, "China" develops as a result of the redirection of ore supply from the US, EU and Japan to China where it grows its surplus and falling prices. 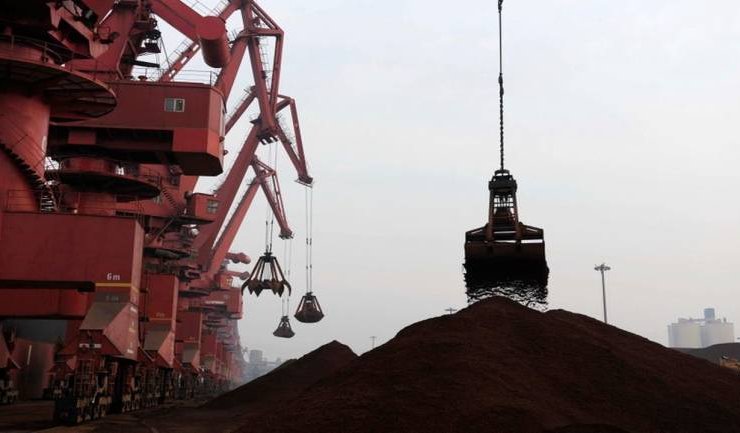 while the stock price of iron ore in China are growing rapidly and gets to the psychological mark of $ 90, the spot price of iron ore fines falls $ 2 to $ 85 per ton. Speculators assume market recovery in steel consumption and continued growth in its production despite quarantine restrictions and the physical market shows signs of excessive sentences.

Although the Chinese iron and steel Association expects a gradual recovery of domestic steel demand, it also warns about the pressure on exports of steel products in this quarter, because the coronavirus is spreading to key markets.

According to the world steel Association, production in Japan declined to a 10-year low in the 2019-20 financial year to 31 March, while the production in April-June 2020, according to forecasts, will decrease by 26% compared to the previous year. Steel producers in the EU announced a reduction of up to 20% of steel production. India, a key exporter of pellets, also predicted the sharp decline in steel demand.

the producers of iron ore reported a sharp reduction of production and supply, which means the shift to China.

According to the American Bank Morgan Stanley, in 2019, Europe, Japan and South Korea imported about 300 million tons of iron ore, accounting for about 20% of marine supplies.

If the rate of decline of steel production in the world will be comparable with the financial crisis of 2008, when the production reduced by 30% in Europe, 26% in Japan and 9% in South Korea, which led to the reduction in iron ore imports to 109 million tons, or 32%, in 2009, the Bank said.

According to forecasts, these levels of reduction can result in sending an additional 15 million tonnes of iron ore to China from Europe and Japan later this quarter.

Recall that the largest mining-metallurgical enterprises of Ukraine "ArcelorMittal Kryvyi Rih" has already started to supply iron ore to China by sea and planiruet to increase the volume of shipments up to 300 thousand tons per month.

Share of China in exports of iron ore from Ukraine in the first quarter of 2020 has increased by more than 2.5 times – up to 52%.

Финансовая аналитика, прогнозы цен на сталь, железную руду, уголь и другие сырьевые товары. More news and analytics on Metallurgprom telegram channel - subscribe to get up-to-date market information and price forecasts faster than others.
Сomments
Add a comment
Сomments (0)
On this topic
The steel industry, the United States recognized itself the most energy efficient in the world
US imposed export restrictions against Ukraine, Russia, Venezuela and China
Ukraine accepted the offer of the Mask on the free ventilators
The demand for gold in the world in the first quarter of 2020 fell by 26%
Ukraine is awaiting approval of the IMF loan of 5 billion dollars 5 June
A billion tons of cargo have passed through the port of Dubai in 10 years, and most of them are
Recommended:
Electric vehicles will play a key role in US aluminum production growth - Norsk Hydro
JSW Steel, ArcelorMittal and NLMK may buy two Liberty Steel plants in Belgium
ArcelorMittal invests $120m in US green steel company
News Analytics
Sanjeev Gupta's Liberty Steel Seemed as Potential Buyer of Aartee Bright Bar07-02-2023, 13:07
Tata Steel showed a steady increase in its revenues07-02-2023, 12:32
Eurofer expects EU steel demand to fall 4.6% in 2022 and 1.6% in 202305-02-2023, 13:31
EU Green Deal should encourage investment in mild steel projects: Eurofer02-02-2023, 16:32
Belarusian steel plant to operate at full capacity from February02-02-2023, 16:56
European stainless steel producers ready to raise prices31-01-2023, 16:16
S&P: Russia will continue to dominate the steel export market in the Black05-01-2023, 11:22
Fitch Analysts Predict Big Drop in Global Steel Consumption This Year14-12-2022, 13:59
Analysts predict 5% annual growth in the iron casting market through 203006-12-2022, 12:44
Commodity prices will fall, metals quotes will rise slightly - Focus Economics28-11-2022, 13:28
Sign in with: