The total value of contracts discussed at a meeting with representatives of the State Property Fund and the Kharkiv Regional Administration is 5.5 billion hryvnia. 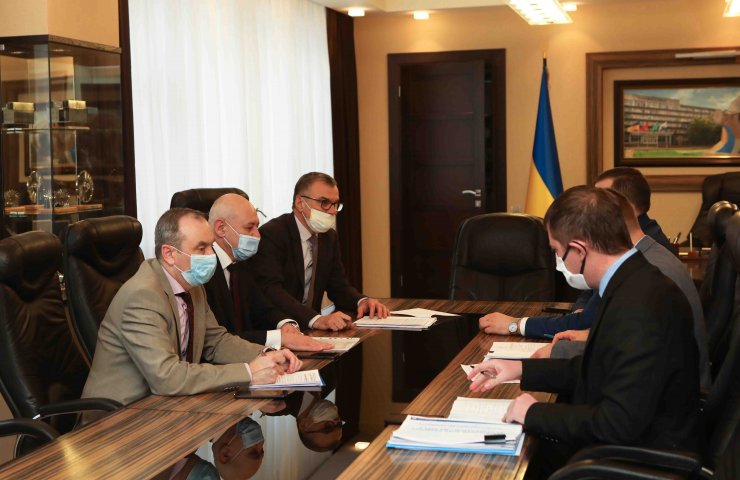 The meeting participants discussed issues of joint contracts between Turboatom and Electrotyazhmash and outlined ways to stabilize production development on the basis of contracts that include generator production.

The purpose of the working meeting is to ensure a stable workload for the enterprises of SE "Plant Electrotyazhmash" and JSC "Turboatom", payment of wages and provision of social guarantees.

Since 2016, Turboatom, together with Electrotyazhmash, has been working on five contracts for the reconstruction of hydroelectric units for the Kanevskaya HPP, Kievskaya PSPP, Sredneprovskaya HPP, DneproGES-2 and Kremenchugskaya HPP, a total of 16 units.

The contracts were concluded with PJSC "Ukrhydroenergo", financed with loans from the European Bank for Reconstruction and Development and the European Investment Bank within the framework of the project "Reconstruction of hydroelectric power plants in Ukraine". Turboatom is the general contractor.

We also discussed the prospects for further cooperation. Today it is planned to take part in the work on the manufacture of three new hydro turbines and generators for the Dnestrovskaya PSPP (units No. 5, 6, 7) (Ukraine), the manufacture of a new turbine with a generator, as well as the modernization of the existing hydro unit at the Kruonis PSP (Lithuania ), work with TPP Aksu (block No. 8). Also, negotiations are underway on possible contracts in India and Tajikistan.

Recommended:
Specialists of the Chinese company CISDI will spend three months at ArcelorMittal Kryvyi Rih
Abu Dhabi invests around £ 5 billion in the UK economy
Nikopol pipe plant "Centravis" is approved as a supplier of the Chinese corporation Sinopec
On this topic
Ukrhydroenergo has denied the existence of the debt to Elektrotyajmash
In the shops "Turboatom" work continues on equipment for the Ukrainian hydro power plants
At Turboatom presented the achievements of the economy of Ukraine in the last 100 days
Photo: On the Dniester PSP mounted impeller weighing 120 tons
Turboatom of Kharkiv was visited by the delegation of the European investment Bank
JSC "Turboatom " shipped the fourth guide vane out of seven planned
Add a comment
Сomments (0)
News Analytics
Three European delegations visited the Mariupol commercial port in two days22-04-2021, 14:23
ArcelorMittal is the best employer in the MMC of Ukraine in 2021 - research22-04-2021, 14:28
US pledges to halve emissions by 2030 as part of renewed fight against global22-04-2021, 14:52
ArcelorMittal Raises Hot Rolled Steel Prices in Europe Above € 1,000 /Ton22-04-2021, 13:24
Chinese subway cars begin operational tests in Chicago22-04-2021, 13:44
Global hydrogen demand to grow 7-fold by 2070 - PwC21-04-2021, 12:31
World Steel Association predicts a good year for metallurgists15-04-2021, 18:19
World Steel Association defines green steel and its variations12-04-2021, 13:14
China unlikely to cut steel capacity in 2021 due to high steel prices07-04-2021, 12:11
Scrap metal market at the beginning of April02-04-2021, 11:10
Sign in with: