The stacks of exported flat-rolled steel began to be covered with corrugated board structures to prevent rust and preserve the presentation of the sheets. 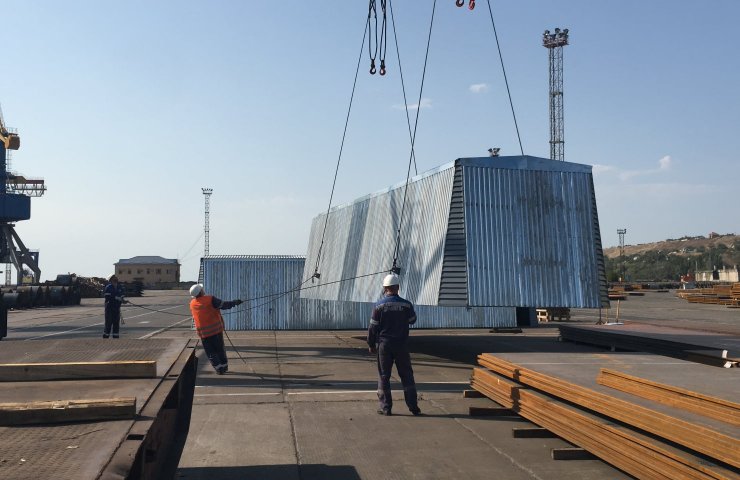 In the Mariupol International Trade Port, two prototypes of mobile coatings for stacks of heavy-plate products have been successfully tested.

They were developed by the design bureau of the Azovstal plant with the participation of technologists and the design department of the port.

The idea of ​​creating coatings has been around for several years now, and it arose because more and more attention is paid to product quality in European markets. Accordingly, Azovstal had a request to protect thick-plate products from atmospheric influences - rain, snow, condensation, fog.

The Mariupol port cannot provide covered warehouses for this type of cargo. Of several other options, the specialists settled on mobile shelters, which are a spatial frame made of shaped pipes and corners, sheathed with galvanized corrugated board.

Each such shelter is designed for a stack up to 2.5 meters high with a capacity of 550-600 tons. The shelter is made in such a way that it is possible to store them on high levels to save storage space.

“As a result of the development, we came to a light openwork structure, which is lifted with four slings and fixed on a magnetic suspension. The design of the slings was thought out so that the process was as simple and fast as possible. Prototypes have already been tested and now it remains to work out the issue of our further cooperation with Azovstal.

Recommended:
23 employees of the Oktyabrskaya mine in Kryvyi Rih continue their underground strike
Metinvest equips new oxygen points in Mariupol for seriously ill coronavirus
Dolomite powder market to reach USD 33.44 billion by 2027
On this topic
Net profit of commercial port of Mariupol for half a year soared 58 times
Transshipment of ore in the port Yuzhny increased for the six months 80%
Mariupol plants for the first time in history started to ship slabs to Odessa by sea
Steelmakers of Metinvest helped to make Chernobyl safe
Companies from Qatar and Ukraine declared about the participation in the concession tender in Porto
Belarus to restore river navigation with Ukraine
Add a comment
Сomments (0)
News Analytics
Thyssenkrupp says negotiations to sell steel business have not progressed a step30-10-2020, 18:50
Kazakhstan launched a new technology for the production of batteries30-10-2020, 16:03
Erbol Nurgaliyev visited the metallurgical plant of JSC "ArcelorMittal Temirtau"30-10-2020, 16:27
Ukrzaliznytsia and NABU signed a memorandum of cooperation30-10-2020, 16:59
DMK expands its assortment of continuously cast billets30-10-2020, 16:19
Platts Steel Trade Review: China Will Decide Asia's Fate30-10-2020, 10:04
Dolomite powder market to reach USD 33.44 billion by 202705-10-2020, 12:33
Iron ore prices to surpass six-year high soon16-09-2020, 10:32
World Oil Demand Peak May Be Over - BP15-09-2020, 09:05
China expands car market capacity by increasing demand for steel and metals11-09-2020, 10:56
Sign in with: