The most popular cargo handled in the port of Mariupol are steel slabs and pig iron, which are exported for further processing. 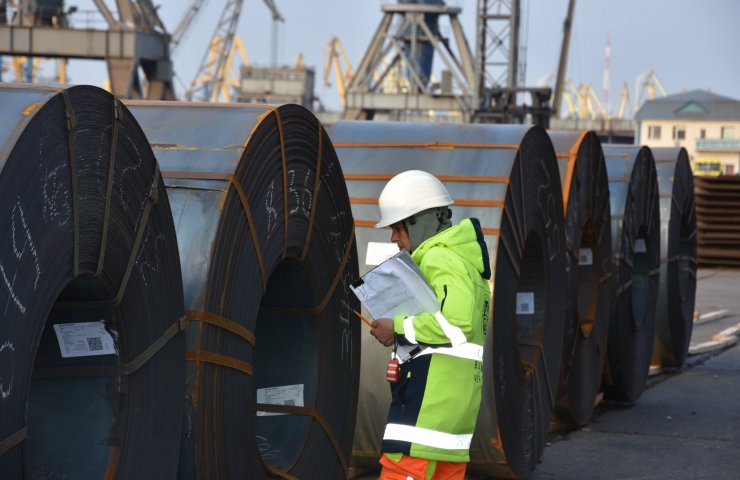 According to the press service of the Mariupol Commercial Sea Port, for ten months of 2020, the transshipment of ferrous metal cargo increased by 126% compared to the same period last year (APPG).

In total, in January-October, 5 million 147 thousand tons of cargo were handled in the largest port of the Azov Sea, which is 443.1 thousand tons more compared to the APPG. This increase was made possible by an increase in the transshipment of ferrous metals and grain.

Despite the negative consequences of the coronavirus epidemic in Ukraine and in the world, the port workers still managed to exceed the volume of cargo handling compared to the results for 10 months last year.

Slabs are one of the most common cargoes handled by the port of Mariupol. Over the past 3 years, their share in the total cargo turnover of the Mariupol port has been about 50%.

Pig iron is one of the traditional and second most popular cargo of the Mariupol port. Before the construction of the Kerch Bridge and, accordingly, before the height limits of the surface gauge of ships that pass under it, a significant amount of pig iron was exported through the Mariupol port. So only to America - annually about a million tons. Now the volumes have decreased, but the cargo remained.

Recommended:
German parliament officially recognizes elections in Belarus as rigged
Bogdan Motors and Yuzhmash will jointly produce electric buses and trolleybuses
SE "VostGOK" promises to pay off wage arrears by the end of next week
On this topic
Net profit of commercial port of Mariupol for half a year soared 58 times
Yuzhmash told whether it is possible to launch reusable rockets from the Black Sea
Transshipment of ore in the port Yuzhny increased for the six months 80%
Port "South" has set an absolute record in handling most of them ore and coal
Ukrainian ports reached a record volume of transhipment cargo
Ukraine needs 16 billion dollars of investment in infrastructure and grain storage
Add a comment
Сomments (0)
News Analytics
Hydrogen trains in Austria received approval for operation on passenger lines01-12-2020, 19:01
Metinvest is recognized as one of the most sustainable companies in Ukraine01-12-2020, 18:38
Nord Stream 2 will complete construction of the Russian ship Akademik Chersky -01-12-2020, 17:49
Russia did not mind replacing natural gas with hydrogen in Ukrainian transit in01-12-2020, 15:55
Rostec quadrupled the engine resource for the Yak-13001-12-2020, 15:35
European Union scrap collectors worried about possible export restrictions18-11-2020, 10:41
Occupational diseases of workers in the extractive industry: types and ways to16-11-2020, 17:49
Eurofer expects recovery in EU steel demand05-11-2020, 09:47
Hot rolled carbon steel demand will continue to grow by 4% pa until 203004-11-2020, 16:14
Platts Steel Trade Review: China Will Decide Asia's Fate30-10-2020, 10:04
Sign in with: