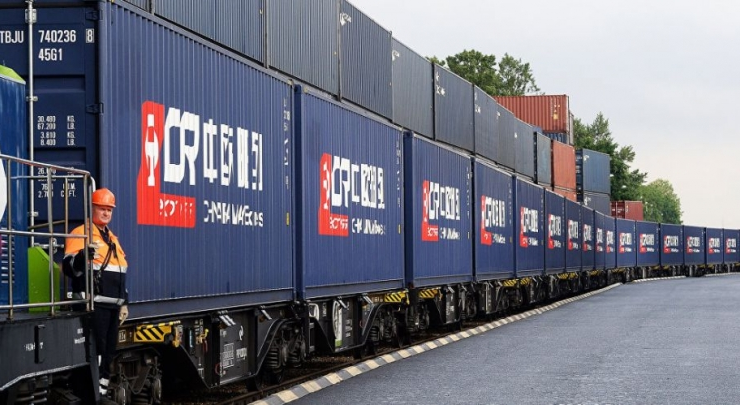 In 2020, Ukraine received 22 container trains from China, another train is on the way. This was announced on Monday by the operator of the country's railways - the company "Ukrzaliznytsya ".

The "Ukrzaliznytsia " recalled that direct container shipments from China to Ukraine were launched on June 8 this year. Railroad trains are used to transport fertilizers, equipment, non-ferrous metal products, footwear and other goods.

The length of the route of container trains exceeds 9 thousand km. On average, they cover this distance in 15 days.

Ukrainian officials have repeatedly stated that regular direct container shipments from China will further strengthen trade and economic ties between the two countries.

In the first half of 2020, the PRC became the largest trading partner of Ukraine. Bilateral trade reached $ 6.65 billion, an increase of 21.3 percent. against the same period last year.

Recommended:
At least 12 living miners remain under the rubble of a mine blown up on January 10 in China
Google employees form their own union in response to layoffs and discrimination
Chinese automaker Chery's exports grow 18.7% in 2020
On this topic
Ukrzaliznytsia insists that took into account the recommendations of the Antimonopoly Committee in
Ukrzaliznytsia developing a strategy for the development of multimodal transport
Kvsz: uz refuses to buy Ukrainian diesel trains
On the territory of Ukraine was the first container train from China to the EU
Ukrzaliznytsia plans to purchase in 2020 of 26 new passenger cars
Sea container transportations in Ukraine has grown by 20 percent exceeding million TEU
Add a comment
Сomments (0)
News Analytics
In 2021, an analogue of the US Department of Defense Research Projects Office26-01-2021, 11:24
Turkey plans to produce 100 tons of gold annually26-01-2021, 11:15
Energomashspetsstal successfully handed over to the customer 8 covers for the26-01-2021, 10:31
Russian Magnitka expects high profits and further rise in steel prices26-01-2021, 10:31
Large oil and gas field discovered in the South China Sea26-01-2021, 09:08
China will overtake the United States to become the world's largest economy in27-12-2020, 12:04
The shortage in the US steel market will last at least until the end of the25-12-2020, 11:36
Steel production in China to surpass one billion tons this year23-12-2020, 10:59
Iron ore prices hit seven-year high and continue to rise15-12-2020, 10:26
Prices for metallurgical raw materials continue to rise in regional markets10-12-2020, 11:32
Sign in with: