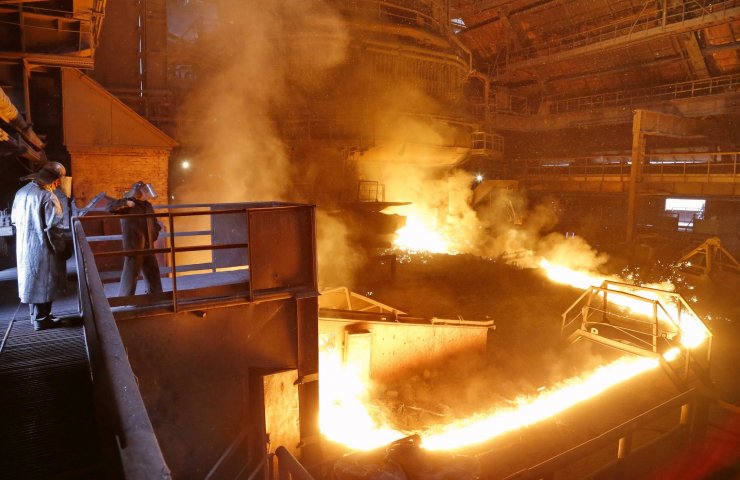 At the Metallurgical Plant named after Ilyich (MMKI) of Metinvest Group, following blast furnace No. 3, modern aspiration units will also be installed on blast furnace (BF) No. 5. The main construction work is planned to be completed this summer. Investments in the construction of aspiration units for the foundry yard and bunker rooms for the fifth blast furnace will amount to US $ 26 million. Environmental modernization at the enterprises of the Metinvest Group continues, despite the fact that the pandemic in 2020 practically paralyzed the global market.

Industrial enterprises from China to the UK were forced to defend their manufacturing facilities. The governments of the EU and China have taken a number of measures to restrict the functioning of industrial enterprises. Contractors did not travel outside their countries. The supply of equipment and spare parts between countries was extremely limited. Global changes in the world have also affected the implementation of Metinvest Group's environmental projects. All efforts were devoted to completing the largest environmental project in the history of Ukraine - the modernization of the sinter plant. In 2020, it was also planned to build another aspiration unit in the blast furnace shop, but there were difficulties with the delivery of equipment for repairs and construction in other divisions. Recent data showed that BH # 5 needs modernization more than BH # 2.

Acting on the basis of Permission for emissions of pollutants into the air from stationary sources No. 1412336600-44, a decision was made on the primary modernization of blast furnace No. 5 at MMKI, which has a high productivity and is located in close proximity to social facilities, including secondary school No. 20. To date, work has been completed on the planning of areas for the construction of new aspiration systems. Preparatory work has begun on dismantling and transferring structures and installing temporary power grids.

The main work on the ecological modernization of BF # 5 will be carried out in two stages. At the first stage, without stopping the blast furnace, a complex of aspiration systems will be built, including the laying of foundations, installation of metal structures, gas ducts, umbrellas and shelters. In addition, the necessary communications will be connected and bag filter equipment installed. At the second stage, during the stopping of the furnace for major repairs, bag filters will be connected to the aspiration systems of the casting yards and bunker rooms, and commissioning will be performed. At this stage, the reinforcement of the existing structures of the foundry yards will be completed and the adjacent territory will be equipped. The completion of these works is planned for the summer of this year. After the commissioning of new aspiration units for blast furnace No. 5, the residual dust content will be lower than the approved standard indicators.

“We are following the path of creating a clean metallurgical production, step by step fulfilling our obligations on the environmental modernization of production. For example, last year we not only completed a large-scale modernization of the sinter plant's technological gas purifiers, but also launched new aspiration units at blast furnace No. 3. This year, we are starting to build modern aspiration systems for the fifth blast furnace, ”said Taras Shevchenko, General Director of the Ilyich Metallurgical Plant of Metinvest Group.

Let us remind you that in 2020 Metinvest Group completed the modernization of technological gas purification plants at the Ilyich Metallurgical Plant, the largest environmental project in the history of Ukraine. The cost of the reconstruction was more than $ 160 million.

Metinvest is a vertically-integrated group of mining and metallurgical enterprises headquartered in the Netherlands. The group's enterprises are located mainly in Donetsk, Lugansk, Zaporozhye and Dnepropetrovsk regions. The main shareholders of the holding are the SCM group of Rinat Akhmetov (71.24%) and Vadim Novinsky's Smart Holding (23.76%), jointly managing it.

Recommended:
The fall in the price of nickel by more than 8% was the sharpest in 4 years
China's machinery industry demonstrates robust growth
All Porsche cars will soon be electric except the Porsche 911 - Oliver Bloom
On this topic
Steel production at Metinvest's plants in Q3 2020 increased by 22%
Metinvest completes the 150 millionth reconstruction of the Ilyich plant despite the pandemic
At the sinter plant of the Ilyich Iron and Steel Works, final work on equipment debugging has begun
At the plant named after Illich in Mariupol completed the repair of blast furnace and Converter
Mariupol metallurgical plant can be fined 10.5 million UAH
Metinvest has taken out a loan to Finance the oxygen complex on the boiler. Ilyich
Add a comment
Сomments (0)
News Analytics
Tibet invests about $ 30 billion in infrastructure projects in 5 years06-03-2021, 14:39
Siemens Energy promised Deutsche Welle to closely monitor democracy in Belarus06-03-2021, 10:32
US and EU suspend the collection of duties that were imposed against each other05-03-2021, 22:48
Turboatom and Electrotyazhmash discussed prospects for cooperation under05-03-2021, 19:04
DMZ Yaroslavsky in February almost doubled the production of rolled products05-03-2021, 18:19
Spread between raw materials and high strength alloy steel in Europe increased01-03-2021, 20:21
Increase in prices is forecasted in the markets of steel raw materials -26-02-2021, 09:25
Troy ounce of gold will drop $ 500 in two years - Fitch25-02-2021, 18:29
Global iron ore production growth to outstrip cumulative production in India23-02-2021, 10:22
Fitch Ratings Warns of “Shocking Impact” on Fossil Fuel Exporters18-02-2021, 14:44
Sign in with: