Interpipe plans to launch another workshop for the production of railroad cars. wheels in the second half of 2021

The equipment is being installed at the site. 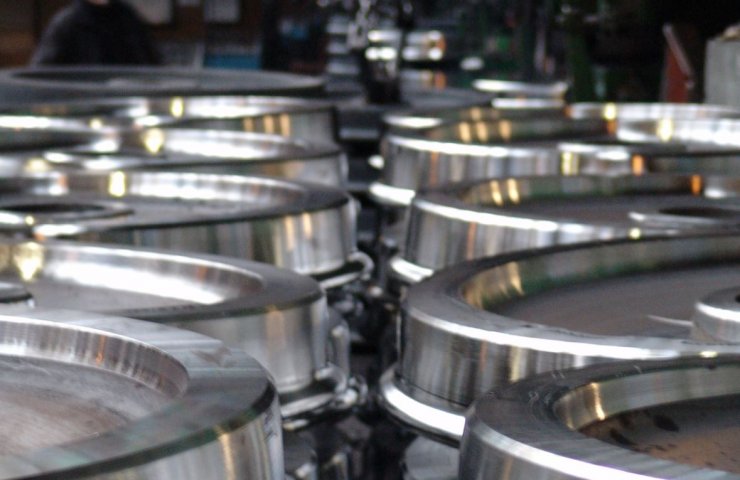 The Ukrainian industrial company Interpipe intends, in accordance with previously outlined plans, to commission a new additional workshop for the production of wheelsets in the second half of this year, said in an exclusive interview with the agency " Interfax-Ukraine ” Director for Economics and Finance of Interpipe Denis Morozov.

“The launch of an additional workshop for the production of wheelsets is scheduled for the second half of this year. Now the equipment is being installed at the site, that is, we can say that the implementation of the project is in full swing, ”the agency's interlocutor stated.

According to him, the company finances all projects from its own funds.

“At the same time, as we reported, last year we attracted a loan from Ukrgasbank for 45 million euros (a five-year loan for 37 million euros and a revolving credit line for 7 million euros for three years - IF), which we used to repay the debt ... As of today, the company has no debt to creditors, "Morozov emphasized.

He also said that the company continues to consider various tools to raise funds.

“Today, in particular, we are developing the financial strategy of the company, which will give answers to the question: where will we raise money from. Today we are working on different scenarios, but we have not yet chosen the priority option, "Morozov said.

At the same time, the top manager noted that at present, the Ukrainian and foreign borrowing markets are almost equal in terms of conditions.

“I don't see the difference whether to raise money in the domestic financial market or abroad. If the financial conditions are good, a fair market interest rate, normal conditions, then why not attract them in Ukraine? If there are good conditions in Europe, why not take a loan there? Therefore, in this case, we do not separate Ukraine and foreign countries, for us it does not matter. We are ready to work with any creditors, ”Morozov emphasized, adding that today rates in Ukraine are practically at the same level as in the West, for example, in Europe.

As reported, at the end of January 2021, Interpipe announced an early full redemption of Eurobonds maturing in 2024 for a total amount of 309 million 192.058 thousand, fully fulfilling its obligations undertaken during the debt restructuring in October 2019.

In October 2019, Interpipe announced a restructuring of its debt, which was formalized by a new issue of Eurobonds maturing in 2024 and bank loans totaling $ 400 million.

Interpipe is a Ukrainian industrial company, manufacturer of seamless pipes and railways. wheels. The company's products are supplied to more than 80 countries of the world through a network of sales offices located in key markets of the CIS, the Middle East, North America and Europe. In 2020, Interpipe sold 662 thousand tons of finished products, including 192 thousand tons of railway products. Railway sales products are carried out under the KLW brand.

Recommended:
European officials urge World Bank to stop fossil fuel investment
ArcelorMittal increases prices for rolled metal in Europe for the fifth time in three months
IMF wants more progress from Ukraine on new tranche
On this topic
Interpipe fully repaid Eurobonds debt
Interpipe reduced sales of pipe and railway products in 2020
Interpipe attracted a 37 million euro loan from Ukrgasbank
The price of electricity for Ukrainian metallurgists turned out to be twice as high as for French
INTERPIPE in 2019. increased sales of railway wheels by 8% and reduced the implementation of pipes
Interpipe has improved its financial results due to growth in demand for railway products
Add a comment
Сomments (0)
News Analytics
European officials urge World Bank to stop fossil fuel investment27-02-2021, 13:00
China's machinery industry demonstrates robust growth27-02-2021, 13:15
Higher Yields on US Bond Leads to Sharp Drop in Cryptocurrency Price27-02-2021, 12:32
In war-torn Syria, robotics courses for girls open27-02-2021, 11:13
Fitch Affirms Ukraine's Rating At "B " With Stable Outlook27-02-2021, 11:10
Increase in prices is forecasted in the markets of steel raw materials -26-02-2021, 09:25
Troy ounce of gold will drop $ 500 in two years - Fitch25-02-2021, 18:29
Global iron ore production growth to outstrip cumulative production in India23-02-2021, 10:22
Fitch Ratings Warns of “Shocking Impact” on Fossil Fuel Exporters18-02-2021, 14:44
Raw material prices rise by about 10.5% in January 2021 - Deutsche Industriebank12-02-2021, 10:48
Sign in with: