The main design of the first stage of the American launch vehicle "Antares" was developed by the Ukrainian State Enterprise "Design Bureau" Yuzhnoye "and manufactured by the State Enterprise" PO YUMZ "(Yuzhmash). 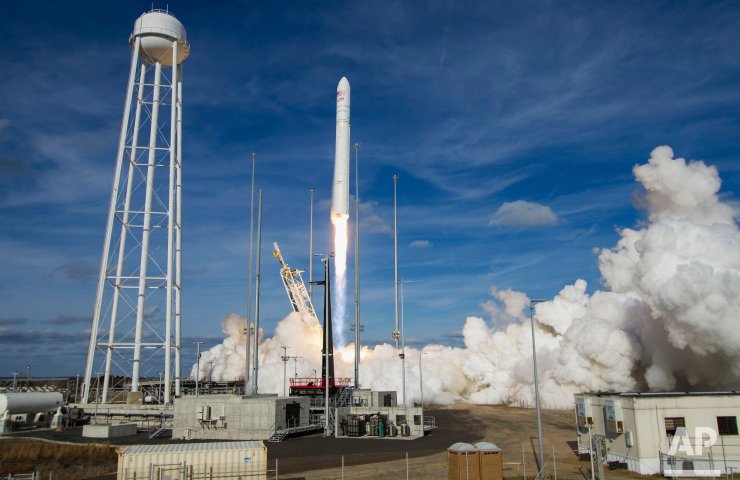 Acting Head of the State Space Agency of Ukraine Mykhailo Lev congratulated the specialists of Yuzhnoye Design Bureau, YuMZ PO and Khartron-ARKOS NPO on the successful completion of all the tasks.

The NG-15 mission is being carried out to replenish the International Space Station (ISS). The Cygnus will deliver approximately 3.6 tons of materials and equipment to the station.

In particular, the SBC-2 supercomputer, created by Hewlett-Packard specialists and NASA engineers, will be sent to the ISS. The first version of this system (SBC-1) was a conventional serial supercomputer packed in an ISS-compatible case. It was installed aboard the station in 2017 to test whether it can operate in zero gravity. The ship will also bring instruments to the station to study the benefits of creating an artificial retina in space, study changes in muscle structure in worms, instruments for growing high-quality protein crystals, as well as a radiation detection system and a regenerative life support system.

In Northrop Grumman tradition, this Cygnus spacecraft also has a name of its own, this time in honor of Katherine Johnson, a NASA mathematician, an African American woman who overcame barriers of gender and race and performed the calculations that were critical to the success of numerous manned space flights.

The Cygnus spacecraft will remain docked to the ISS for three months, after which it will return on its way with a disposal cargo weighing about 3.7 tons.

ThinSats is a science, technology, engineering, and math (STEM) information program sponsored by the Virginia Commercial Space Flight Administration for grades 4-12. These satellites were built by students from 70 schools in 9 states.

Since 2009, YUZHMASH began work on the creation of the main structure of the first stage of the Antares LV. The enterprise manufactures the stage of the launch vehicle for cooperation with Ukrainian enterprises, including KB Yuzhnoye, Khartron-ARKOS, Kievpribor, Khartron-YUKOM, CHEZARA, RAPID.

Recommended:
Laying of Nord Stream 2 in Danish waters is to be completed by the end of April
The Ukrainian government will close two coal mines in Donetsk and Lviv regions
Chinese Skynet will search and catch corrupt officials hiding abroad
On this topic
The historical path from the Energia-Buran project to the Zenit space rocket complex
The space program of Yuzhmash and the Yuzhnoye design bureau received an award from the
Launch vehicle "Antares" is carrying a new toilet for the crew to the ISS
Yuzhmash told whether it is possible to launch reusable rockets from the Black Sea
Americans special Charter took employees CB "southern" from Ukraine to USA
NASA paid Russia four billion dollars for the ISS flight
Add a comment
Сomments (0)
News Analytics
Ministry of Commerce: China intends to strengthen trade and economic ties with24-02-2021, 18:49
Vostochny GOK in 2020 increased the production of uranium concentrate by 7%24-02-2021, 18:58
For the first time in Ukraine, recirculators and irradiators for air24-02-2021, 18:37
Novokramatorsk Machine-Building Plant keeps sales and production at the level24-02-2021, 17:53
The English court rejected the claims of the Russian "Tatneft" against24-02-2021, 17:42
Global iron ore production growth to outstrip cumulative production in India23-02-2021, 10:22
Fitch Ratings Warns of “Shocking Impact” on Fossil Fuel Exporters18-02-2021, 14:44
Raw material prices rise by about 10.5% in January 2021 - Deutsche Industriebank12-02-2021, 10:48
JP Morgan Analysts Announce New Super Growth Cycle in Commodities11-02-2021, 17:56
S&P Global Platts predicts first drop in domestic steel demand in China in 510-02-2021, 12:26
Sign in with: