This plan is based on the program proposed by US President Joe Biden to overcome the economic consequences of the spread of the new coronavirus. 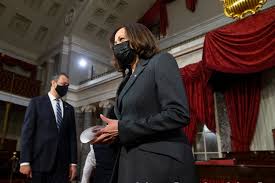 The Senate of the US Congress, during its meeting last Friday, passed a small majority of the stimulus package in the amount of 1.9 trillion dollars, while the votes were almost evenly divided along the party line.

Previously, this bill was approved by the House of Representatives of the Congress. However, in the Senate version, the increase in the minimum wage was removed from the text, and a number of other adjustments were made.

The package of measures provides for the allocation of approximately $ 400 billion directly to the fight against the pandemic. About $ 1 trillion dollars should be directed to providing assistance to the population, the rest - to stimulate the economy.

The bill must once again go through the voting procedure in the US House of Representatives /lower house of parliament /, after which the document will go to President Joseph Biden for signature.

Recommended:
Lutsk automakers called the position of the mayor of Lviv a state approach
British car production plummets to 10-year low in February
Elon Musk's fortune grew by $ 6 billion in a day
On this topic
US to impose sanctions against Nord Stream 2 by the end of the year
How the reform of the electricity market in Ukraine can lead to a collapse and what to do about it
American business warned the Senate of the United States from the introduction of the "hell" of
Ukraine detensive the scrap metal market in the spring
In the U.S., approved a number of bills aimed at deterring Russia in the gas market
Ukrainian customs will protect intellectual property in a European way
Add a comment
Сomments (0)
News Analytics
Iran is satisfied with the reaction of the world community to 60% enrichment of18-04-2021, 13:24
Gas prices in Ukraine have reached a record value over the past two years -16-04-2021, 17:24
Ukrmetallurgprom asks the Antimonopoly Committee to allow Metinvest to bid for16-04-2021, 17:23
A fatal accident occurred on the territory of the Dnieper Metallurgical Plant16-04-2021, 13:01
Cars built for Euro 2012 will be repaired at the Kryukov Carriage Works16-04-2021, 12:46
World Steel Association predicts a good year for metallurgists15-04-2021, 18:19
World Steel Association defines green steel and its variations12-04-2021, 13:14
China unlikely to cut steel capacity in 2021 due to high steel prices07-04-2021, 12:11
Scrap metal market at the beginning of April02-04-2021, 11:10
Rising Chinese Prices Fueled Rising Global Steel Prices - MEPS25-03-2021, 18:54
Sign in with: