Trump vetoed US defense budget with sanctions against Nord Stream 2

The sanctions were supposed to take effect on December 29, but now they will be postponed until at least January 20 - the time of the inauguration of President-elect Joe Biden, unless the US Congress overcomes the veto by January 3. 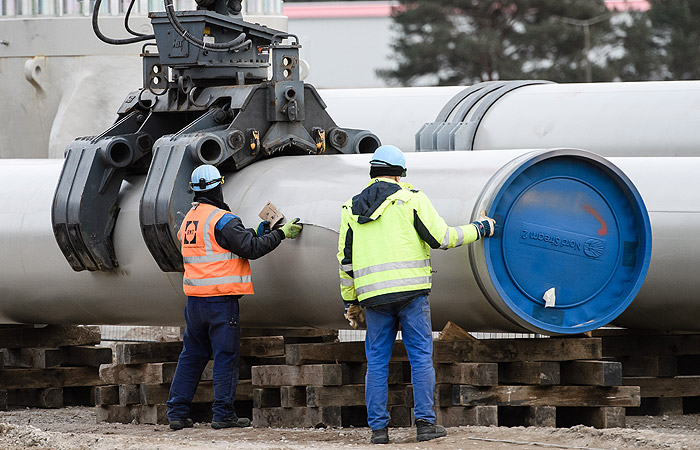 At the same time, Trump called the draft budget "a gift to China and Russia," since, in his opinion, it does not include "critical measures necessary to ensure national security," reports Reuters. He also criticized the project for provisions that offend veterans and military history.

"The project runs counter to my administration's efforts to put US interests first in both national security and foreign policy," Trump said.

House Speaker Nancy Pelosi responded to the president on Twitter: “For 60 years, the defense budget has been adopted by bipartisan consensus. A presidential veto is a reckless move that endangers our troops and threatens our security. ”

Sanctions in the US defense budget are aimed exclusively at companies building the offshore portion of the nearly completed 55 billion cubic meter Nord Stream 2 project, as well as companies that provide underwriting and insurance of pipe-laying vessels and facilitate refurbishment and modernization ships. Sanctions can also be applied to any entity that “provides testing, inspection or certification services” to a pipeline.

Russian-flagged pipe-laying barge Fortuna resumed pipe-laying in German waters earlier this month and is due to resume work in Danish waters from mid-January with the support of Baltic Explorer and Murman and other supply vessels. Prior to the completion of the pipeline laying, approximately 16.5 km of each of the two project lines in German waters and a total of 127 km in Danish waters must be laid.

If the US Congress fails to overcome the veto by January 3, US sanctions against Nord Stream 2 will not come into effect until January 20, and the arrival of a new administration led by President-elect Joe Biden.

Biden's team has promised a tougher approach to Russia, not to mention specifically targeting Nord Stream 2, as the imposition of sanctions against the project runs counter to the president-elect's promise to improve relations with the EU.

But political opinion in Washington is turning against Russia again, this time due to an alleged cyberattack on computer networks controlled by the US government. Moscow denies any involvement, and Trump said it doubts Russia's involvement, which contradicts statements by US Secretary of State Mike Pompeo and Attorney General Bill Barr.

Recommended:
Chinese automaker Chery's exports grow 18.7% in 2020
US hits Iran's steel industry again
Belarusian Metallurgical Plant has released a corporate calendar with its employees
On this topic
Akademik Chersky arrives at the Nord Stream 2 pipe-laying site
US to impose sanctions against Nord Stream 2 by the end of the year
The US government said that the sanctions against the "Nord stream 2" is aimed at the full stop of
The energy Minister said on completion, "Nord stream 2" for a few months
The Swiss-Dutch company Allseas stopped the construction of the "Nord stream-2"
U.S. seeks closing of the companies involved in the construction of "Nord stream 2"
Add a comment
Сomments (0)
News Analytics
January lockdown cuts orders to Ukrainian machine builders, critical for light16-01-2021, 08:11
US imposes new sanctions on Iran in the last days of Trump's presidency16-01-2021, 08:18
Germany gave permission for the completion of Nord Stream 2 in January - May15-01-2021, 11:10
Zaporizhstal exported about 900 thousand tons of rolled metal along the Dnieper15-01-2021, 11:39
Russian automotive market shrank 9.1% in 202015-01-2021, 09:44
China will overtake the United States to become the world's largest economy in27-12-2020, 12:04
The shortage in the US steel market will last at least until the end of the25-12-2020, 11:36
Steel production in China to surpass one billion tons this year23-12-2020, 10:59
Iron ore prices hit seven-year high and continue to rise15-12-2020, 10:26
Prices for metallurgical raw materials continue to rise in regional markets10-12-2020, 11:32
Sign in with: