For the first time in many years, the port of Mariupol began to ship cast iron

The first batch of foundry iron processed by the Mariupol Commercial Sea Port in the last 10 years is sent to Turkey. 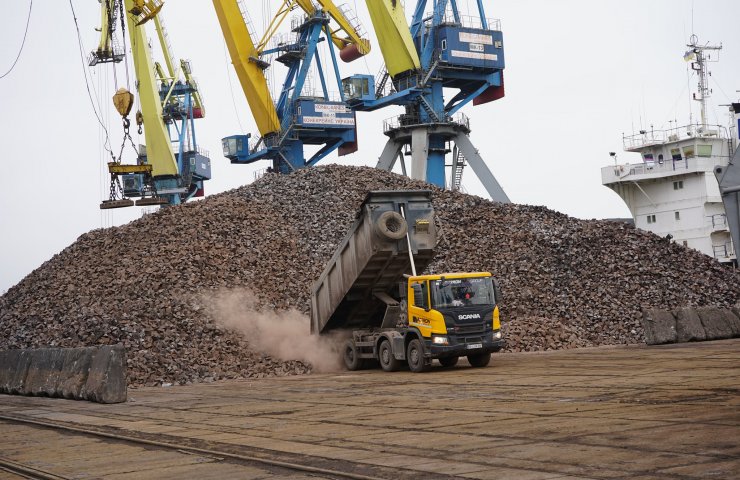 At the 7th berth of the Mariupol port, the ship "NIZAR" is loaded with cast iron, which will then go to Turkey. These almost 4939 tons - over the past decade, the first batch of such cargo produced by the Ilyich Iron and Steel Works, sent through the port of Mariupol.

Cast iron is rarely handled in the Mariupol port. Cast iron was last seen here in 2013. Then, from March to October, 20,537 tons of products from metallurgical plants of the Donetsk region were shipped in small batches, almost all of it went to Turkey and only about 3 thousand tons to Italy.

Cast iron is one of the types of blast furnace iron, which, in comparison with pig iron, has a higher silicon content. Cast iron has low shrinkage, significant wear resistance, and is easy to machine on metal cutting machines. It is used for finished casting of cast iron products.

The port says that pig iron shipments are handled much more often. It comes from both metallurgical enterprises of Mariupol, destination countries - Italy, Turkey, USA. Pig iron has a low silicon and manganese content. Designed for remelting into steel in steel-making units. By the way, more than 90% of all cast iron in the world is recycled.

Recommended:
Interpipe will increase the salary of production personnel by 10%
Specialists of SE "Antonov" ensured the urgent transfer of mining equipment from Australia to Brazil
Energomashspetsstal completed half of the work on the manufacture of the reactor vessel shell of the Akkuyu NPP
On this topic
For 11 months of 2020, the port of Mariupol increased steel transshipment by a third
Mariupol Commercial Sea Port doubled the transshipment of ferrous metals
Steel slabs became the most popular cargo in the Mariupol commercial port
Net profit of commercial port of Mariupol for half a year soared 58 times
Yuzhmash told whether it is possible to launch reusable rockets from the Black Sea
Mariupol plants for the first time in history started to ship slabs to Odessa by sea
Add a comment
Сomments (0)
News Analytics
The capacity of the domestic steel market in Ukraine in January-March decreased19-04-2021, 10:33
In Russia, there is an exuberant demand for agricultural machinery19-04-2021, 10:24
Iran is satisfied with the reaction of the world community to 60% enrichment of18-04-2021, 13:24
Gas prices in Ukraine have reached a record value over the past two years -16-04-2021, 17:24
Ukrmetallurgprom asks the Antimonopoly Committee to allow Metinvest to bid for16-04-2021, 17:23
World Steel Association predicts a good year for metallurgists15-04-2021, 18:19
World Steel Association defines green steel and its variations12-04-2021, 13:14
China unlikely to cut steel capacity in 2021 due to high steel prices07-04-2021, 12:11
Scrap metal market at the beginning of April02-04-2021, 11:10
Rising Chinese Prices Fueled Rising Global Steel Prices - MEPS25-03-2021, 18:54
Sign in with: