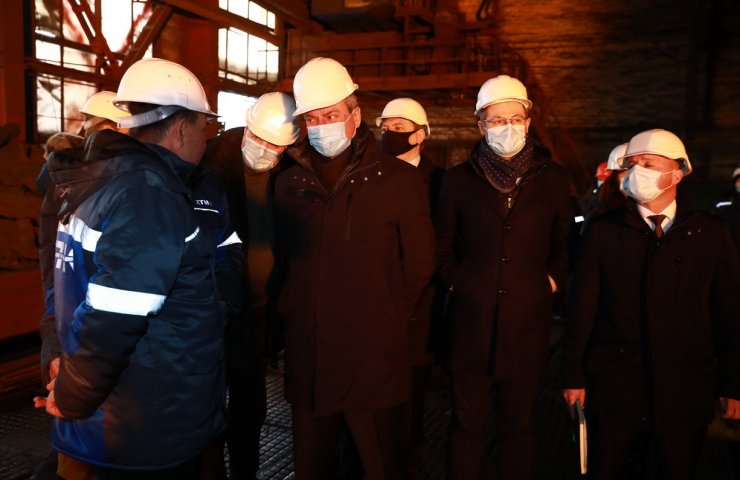 He noted that the titanium industry is strategic for Ukraine and a new impetus to the development of the industry can be provided by the creation of a closed production cycle, which the government is now actively working on. ZTMK plays a leading role in this area, as it is the only sponge titanium producer in Ukraine and Europe.

Urusky also learned about the problems of the once powerful aluminum metallurgical plant, which at one time produced up to 100 thousand tons of aluminum per year.

“After the privatization by the Russian company RUSAL during 2008-2011, production was completely stopped, and the technological equipment was destroyed. In 2015, the dilapidated enterprise was returned to the state. Now at ZaLK JSC there is only an aluminum wire rod workshop - it meets all international standards. Opportunities for attracting investors and ensuring stable supplies of raw materials were discussed with the head of the plant, ”Urusky said.

As a result of visiting the enterprises, the head of the Ministry of Strategic Industry discussed with the head of the Zaporozhye Regional State Administration Oleksandr Starukh the conditions for the arrival of investors in the region and the creation of technoparks on the basis of bankrupt industrial facilities.

Recommended:
Interpipe expands the supply of railroad metal products to the North American region
IMF Raises Global Growth Forecast To 5.5% Amid High Uncertainty
NKMZ began construction of a unique bridge ore grab reloader
On this topic
Zaporozhye Titanium and Magnesium Combine Demonstrated First Results of Financial Recovery Program
The Ministry of Strategic Industry requires developers to accelerate work on the creation of
Trade unions demand from Zelensky to pay attention to the situation with the Zaporizhzhya
Ukraine intends to become the leader of the global titanium industry by 2030
Minister for Strategic Industries of Ukraine inspected YUZHMASH workshops
Concorde Capital told about the preparations for the privatization of the largest coal companies of
Add a comment
Сomments (0)
News Analytics
The capacity of the domestic steel market in Ukraine in January-March decreased19-04-2021, 10:33
In Russia, there is an exuberant demand for agricultural machinery19-04-2021, 10:24
Iran is satisfied with the reaction of the world community to 60% enrichment of18-04-2021, 13:24
Gas prices in Ukraine have reached a record value over the past two years -16-04-2021, 17:24
Ukrmetallurgprom asks the Antimonopoly Committee to allow Metinvest to bid for16-04-2021, 17:23
World Steel Association predicts a good year for metallurgists15-04-2021, 18:19
World Steel Association defines green steel and its variations12-04-2021, 13:14
China unlikely to cut steel capacity in 2021 due to high steel prices07-04-2021, 12:11
Scrap metal market at the beginning of April02-04-2021, 11:10
Rising Chinese Prices Fueled Rising Global Steel Prices - MEPS25-03-2021, 18:54
Sign in with: