For the lining of the converter, we used Polish brick, which is 10% higher than its Ukrainian counterparts in terms of performance. 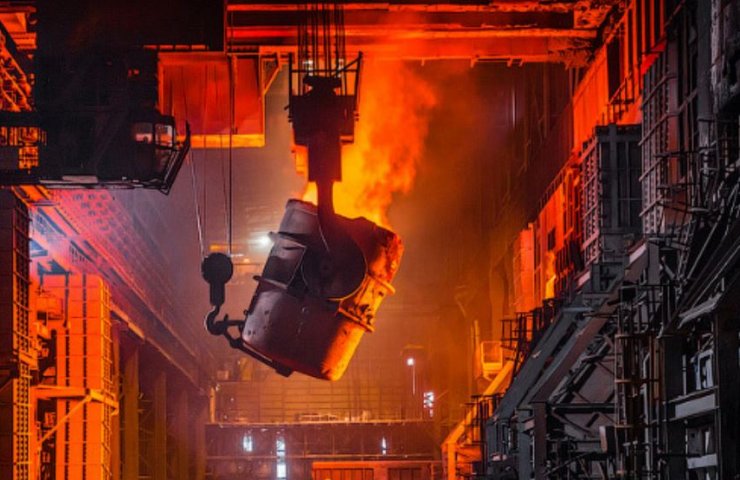 In the oxygen-converter shop of the Dnieper Metallurgical Plant (DMZ, Dnipro), a major overhaul of the converter No. 1 was carried out with the replacement of the neck and tapered part.

Renovation took place since December 2020. The workers of the metallurgical equipment repair shop dismantled the old converter neck and installed a new one, which was cast in the molding shop.

During the repair, 3.5 rows of metal structures of the tapered part were replaced, which required the completion of about 120 meters of welding seams.

In March, specialists from the metallurgical furnace repair section joined the process. For 10 days they laid a new masonry. This time a Polish-made brick was used for the lining, the guarantee for these refractories is 2100 heats instead of the standard 1900.

As of today, converter # 1 has been put into operation after overhaul, converters # 2 and # 3 are in reserve.

Dnipro Metallurgical Plant is a full-cycle metallurgical enterprise. One of the largest industrial enterprises in Dnipro and Ukraine. Part of DCH Steel of the DCH group of businessman Alexander Yaroslavsky.

Recommended:
Energy independence of Ukraine depends on decarbonization and "green" energy - State Energy Efficiency
The transport strategy of Ukraine should provide for the localization of production - USPP
Gas prices in Ukraine have reached a record value over the past two years - 9000 UAH /thousand cubic meters
On this topic
Dnipro Metallurgical Plant will produce 20 deep-bottom molds monthly
Production of dead-bottom molds has been restored at the Dnieper Metallurgical Plant
At Azovstal reduced the time of diagnosis of the lining of the Converter four times
At the plant named after Illich in Mariupol completed the repair of blast furnace and Converter
The Dnieper metallurgical plant launched blast furnace No. 2
The Dnieper metallurgical plant restarts steelmaking
Add a comment
Сomments (0)
News Analytics
Brazil is interested in the production capabilities of Yuzhmash21-04-2021, 14:35
Energoatom ordered a condenser from Turboatom worth 0.5 billion hryvnia for21-04-2021, 14:28
Ukrzaliznytsia reached an agreement with suppliers on the shipment of diesel21-04-2021, 14:25
Global hydrogen demand to grow 7-fold by 2070 - PwC21-04-2021, 12:31
Energy independence of Ukraine depends on decarbonization and "green" energy -21-04-2021, 12:42
Global hydrogen demand to grow 7-fold by 2070 - PwC21-04-2021, 12:31
World Steel Association predicts a good year for metallurgists15-04-2021, 18:19
World Steel Association defines green steel and its variations12-04-2021, 13:14
China unlikely to cut steel capacity in 2021 due to high steel prices07-04-2021, 12:11
Scrap metal market at the beginning of April02-04-2021, 11:10
Sign in with: