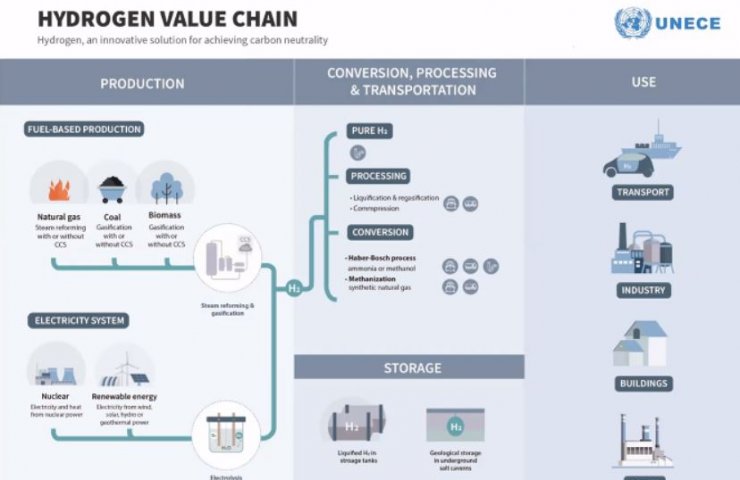 In accordance with the goals of the Energy Strategy of Ukraine for the period up to 2035 to establish the capacities of wind power plants and solar power plants, the average annual production of "green" hydrogen can be 5.5 billion cubic meters per year. This was told during an online workshop organized by the United Nations Economic Commission for Europe (UNECE), Konstantin Gura, acting Chairman of the State Energy Efficiency of Ukraine.

He said that UNECE experts, with the support of the Ministry of Energy and State Energy Efficiency, conducted a study of the potential of hydrogen technologies in Ukraine. The results of the analysis showed the feasibility of introducing a hydrogen economy, the wide scope for this, as well as the benefits of infrastructure connected to the EU.

According to the State Energy Efficiency Agency, the development of hydrogen energy will contribute to enhancing innovation and investment activities, strengthening the economy, increasing the competitiveness of Ukrainian enterprises, energy independence and improving the climate situation in Ukraine.

Recall that German Siemens Energy and Rinat Akhmetov's energy holding DTEK with the support of the governments of Germany and Ukraine have agreed on a pilot project for the production of hydrogen fuel in Mariupol worth 25 million euros and a capacity of 8.5 MW. The hydrogen will be used to make low-emission steel.

Development of hydrogen energy in Ukraine was repeatedly discussed with the leadership of the Federal Republic of Germany and the European Union, and Ukraine, given the significant potential and infrastructure for the production and transportation of hydrogen, seeks to become a partner of the EU in this direction.

Recommended:
Uralvagonzavod at the end of 2020 received a record profit in the entire history of the enterprise
Ukrainian miners will be paid wage arrears in the coming days - Ministry of Energy
Exports of Russian agricultural machinery increased by 2.2 times in the 1st quarter of 2021
On this topic
State Energy Efficiency together with UNECE and stakeholders discussed the possibilities of
Ukraine is regarded as a key EU partner in the development of hydrogen technologies
Ministry of Energy of Ukraine and State Energy Efficiency will develop hydrogen energy
Ukraine is a priority partner in the implementation of the European hydrogen strategy
Questions the decarbonization of the global economy discussed during the videoconference
DTEK has launched a new wind power plant in Zaporizhia region
Add a comment
Сomments (0)
News Analytics
Volodymyr Zelenskyy signed a law to extend the export duty on ferrous scrap16-05-2021, 09:29
China's Tianwen 1 spacecraft successfully landed on Mars15-05-2021, 12:56
British law enforcement officials accused Liberty Steel and GFG Alliance of15-05-2021, 12:03
Chip shortage will cost the global auto industry $ 110 billion in revenue in14-05-2021, 12:15
Zaporizhzhya Dneprospetsstal expands international partnership14-05-2021, 11:17
The current state of the market is ideal for the sale of rolled steel - IREPAS04-05-2021, 18:41
Global hydrogen demand to grow 7-fold by 2070 - PwC21-04-2021, 12:31
World Steel Association predicts a good year for metallurgists15-04-2021, 18:19
World Steel Association defines green steel and its variations12-04-2021, 13:14
China unlikely to cut steel capacity in 2021 due to high steel prices07-04-2021, 12:11
Sign in with: