The lifting-and-rotating steel-pouring stand is one of the main parts of the technological equipment of a modern continuous casting machine. NKMZ made it mobile. 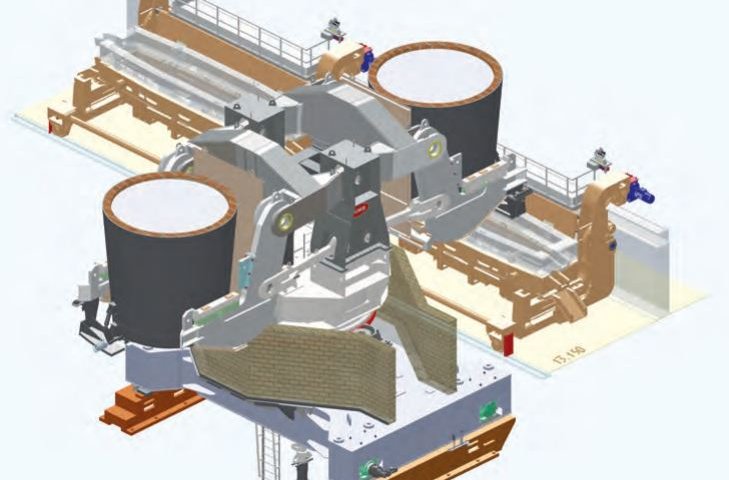 At the Novokramatorsk Machine-Building Plant, the customers - metallurgists of OJSC "Uzmetkombinat" (Bekabad, Republic of Uzbekistan) presented a modern lift-and-rotate steel-pouring stand of a new design to customers - metallurgists. Having familiarized themselves with the work of the stand, the Uzbek specialists were completely satisfied with it. As a result, an intermediate acceptance certificate was signed.

NKMZ has extensive experience in the design, manufacture and replacement of steel-pouring stands of all types and various carrying capacities. For almost twenty years, the enterprise has manufactured and delivered 19 such stands for metallurgists of Ukraine, Europe and Russia, each of which has certain peculiarities. The highlight of this 20th stand is mobility. The contract for its manufacture between NKMZ and Uzmetkombinat was signed at the end of August 2020, and in October all the necessary documentation was issued for production.

Another feature of this contract is that the customer has set a rather tight deadline for the delivery of equipment, while the Novokramatorsky managed to ensure its early production.

Vladimir Chibishev, Deputy Head of the Electric Steel Smelting Shop for Mechanical and Power Equipment of OJSC Uzmetkombinat, shared his first impressions of the new stand.

“The brainchild of the Novokramatorsk people is impressive. I think we were not mistaken in choosing a stand manufacturer. As a specialist, I have been to many enterprises in the post-Soviet space. In comparison with them, NKMZ surprises with its large capacities and high potential. Your company has a great future. The Uzbek Metallurgical Plant plans to increase production capacity, modernize and upgrade equipment. I think that we will find a common language with NKMZ in terms of further cooperation, ”Chibishev said.

Andrey Tsarev, chief designer of the design department of the metallurgical and mine-tunneling equipment division of NKMZ, talks about the specifics of this contract.

“When concluding the contract, we managed to win in a tough competition, because in the process of preparing it we worked closely with the technical specialists of the Uzmetkombinat, and in the new stand we tried to implement all the solutions they needed.

It has two independent lifts, the lifting capacity of each log is about 200 tons. All steel-pouring stands previously manufactured by NKMZ were installed permanently. And this one will be installed on a roll-out platform that has its own drive, which will move it at a distance of five meters from the casting axis. The need to move the stand arose due to the impossibility of assembling it in the space between the aisles of the workshop, where it will be finally installed.

The advantages of NKMZ steel-pouring stands in comparison with stands of other manufacturers are that more than 20 patents have been obtained for the new design solutions used in them. This circumstance allows them to be on the market for this equipment much more attractive in comparison with similar products of competitors.

Финансовая аналитика, прогнозы цен на сталь, железную руду, уголь и другие сырьевые товары. More news and analytics on Metallurgprom telegram channel - subscribe to get up-to-date market information and price forecasts faster than others.
Сomments
Add a comment
Сomments (0)
On this topic
NKMZ shipped a unique steel-pouring stand to Uzbekistan
NKMZ shipped the Dnieper metallurgical plant unique steel teeming stand
A new steel-pouring stand was launched at the Dneprovsk Iron and Steel Works
A new steel-pouring stand is being prepared at DMK
Installation of a spreader made by Ukrainian NKMZ continues in Uzbekistan
Novokramatorsk Machine-Building Plant keeps sales and production at the level of 2019
Recommended:
Russia will allocate more than $700 million for the production of domestic aircraft engines
India plans measures to stimulate domestic steel exports
Platinum market to face shortage next year - WPIC
News Analytics
China's iron ore output to rise in 2023 as new projects are launched30-11-2022, 18:10
"Centravis" agreed to supply a new batch of seamless pipes to a30-11-2022, 16:51
Metinvest enterprises in Ukraine resumed work after massive shelling of29-11-2022, 11:59
The European Council added the violation of restrictive measures (sanctions) to28-11-2022, 14:22
The abolition of export duty in India may reduce the price of Turkish steel28-11-2022, 14:07
Commodity prices will fall, metals quotes will rise slightly - Focus Economics28-11-2022, 13:28
Platinum market to face shortage next year - WPIC22-11-2022, 18:25
Global steel demand falls and will fall by 2.3% in 2022: WorldSteel19-10-2022, 23:12
Iron ore prices fall to 11-month low15-10-2022, 10:36
China production cuts in winter will give limited boost to steel markets -15-09-2022, 10:09
Sign in with: