It is necessary to exclude the possibility of artificial limitation of competition and access to trading in order to avoid stopping the Ukrainian metallurgical plant, they say in the metallurgical lobby. 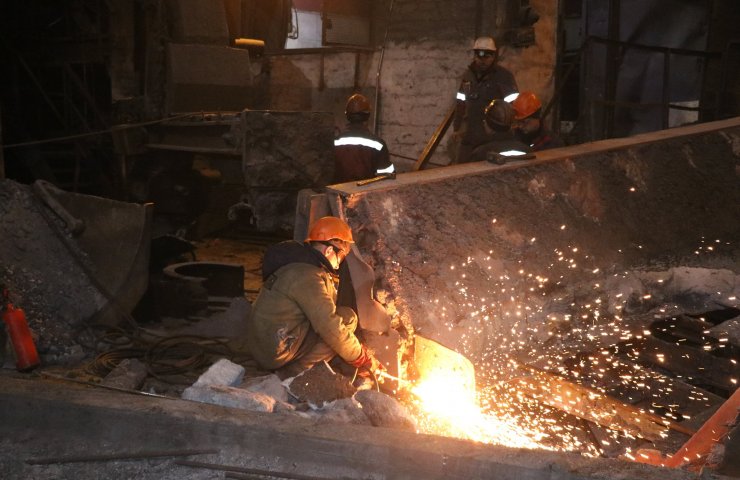 Ukrmetallurgprom is concerned about the situation around the Dnieper Metallurgical Plant, and appealed to the Antimonopoly Committee of Ukraine (AMCU) regarding the negative consequences that could lead to the shutdown of one of the flagships of the Ukrainian metallurgical industry.

In your appeal sent to the Chairman of the Antimonopoly Committee of Ukraine, Ukrmetallurgprom asks to exclude the possibility of artificial limitation of competition and access to trading. As it became known, in 2020, the Dutch mining and metallurgical holding of Ukrainian billionaires R. Akhmetov and V. Novinsky Metinvest B.V. (Metinvest), as part of a formal procedure, applied to the AMCU with a request to grant permission for the concentration of CMK DMK, which would allow Metinvest, as one of the participants, to take part in open tenders. As of April 15, 20201 the company has not received a response from the AMCU.

"This situation puts Metinvest BV in an unequal position in comparison with other potential auction participants and, in fact, excludes the possibility of its participation in such an auction, since without a formal decision of the AMCU preparation for participation, payment of a guarantee fee and other actions may lead to unjustified financial costs and expose the company to unreasonable risks, "the appeal says.

According to the metallurgical lobby, such actions of the AMCU can lead to negative consequences, namely, an unreasonable decrease in the cost of selling the SSC and, as a result, insufficient filling of the final amount that will be paid to creditors of PJSC "DMK" in order to satisfy their competitive requirements and cancellation of trading and liquidation of PJSC "DMK". Then, instead of rescuing and continuing the activities of the plant, such actions will lead to a complete halt of large industrial production, and, as a result, a halt in wage payments to employees, a fall in tax revenues and fees to local and state budgets, dismissal of workers and an increase in unemployment, the emergence tension and even a social explosion in the region.

Ukrmetallurgprom noted that the mining and metallurgical complex is one of the key sectors of the Ukrainian economy. MMC enterprises and industries related to the complex provide about 12% of Ukraine's GDP (the main junk in the structure of the GDP of Dnipropetrovsk, Donetsk, Poltava and Zaporizhzhya regions). MMC is one of the main payers of taxes in Ukraine, in 2019 tax revenues from MMC amounted to 3.7% (almost UAH 30 billion). The enterprises of the MMC employ 190 thousand people, together with related industries - more than 600 thousand jobs, they provide 11% of the wages fund in Ukraine. They recalled that the Dnieper Metallurgical Plant is a city-forming enterprise, the share of which in the industrial infrastructure of the city reaches about 60%, and 10 thousand people receive their wages on time and provide for their families. The plant is one of the largest taxpayers of the Dnipropetrovsk region and is one of the hundred leaders in paying taxes to the state budget according to the State Fiscal Service. In addition, the company is a source of foreign exchange earnings in the country.

"Ukrmetallurgprom hopes to consider the appeal and receive an answer regarding the further situation around the enterprise of the industrial complex of Ukraine. We also hope that the AMCU will exclude the possibility of artificially restricting competition and access to trading for creditors who have significant experience in the metallurgical industry, and take care of its development and building up the positions of the Ukrainian metallurgy, "- summed up in the association.

Recommended:
IndustriALL calls on the Ukrainian government to take immediate action on the situation at VostGOK
On the regional markets of metallurgical products, prices are balancing in a narrow corridor
Electric car maker Rivian raises another $ 2.5 billion in private investment
On this topic
Metinvest will gain control over the largest producer of coking coal in Ukraine
Another investor will file a claim against the state of Ukraine in international arbitration
The Antimonopoly Committee of Ukraine fined Interpipe for abuse of monopoly position
Ukrzaliznytsia insists that took into account the recommendations of the Antimonopoly Committee in
The Antimonopoly Committee of Ukraine expects reduction of prices on gasoline in the retail market
AMC has ordered "Ukrzaliznytsya" cancel dubious tender for purchase of gas
Partner news
Сomments
Add a comment
Сomments (0)
News Analytics
National Bank of Ukraine predicts economic growth in 2021 by 3.8%29-07-2021, 23:32
"Electrotyazhmash" shipped the stator housing of the hydrogenerator to the29-07-2021, 18:00
Gas price in Europe exceeded $ 500 per thousand cubic meters29-07-2021, 16:43
German concern ThyssenKrupp sells its mining business29-07-2021, 16:22
We are working hard: Ukrzaliznytsia records record indicators of daily load29-07-2021, 11:56
Steel raw materials prices decline in all regional markets27-07-2021, 11:57
On the regional markets of metallurgical products, prices are balancing in a22-07-2021, 16:22
Demand for armaments will ensure a stable growth of armored steel sales by 4%20-07-2021, 10:10
Protectionist Measures Support European Steel Prices Despite Summer Lull19-07-2021, 11:02
Positive price growth is observed in the markets for metallurgical products16-07-2021, 14:12