He was accompanied by the mayor of the city of Mariupol Vadim Boychenko and the acting director of the Mariupol port Igor Barsky. 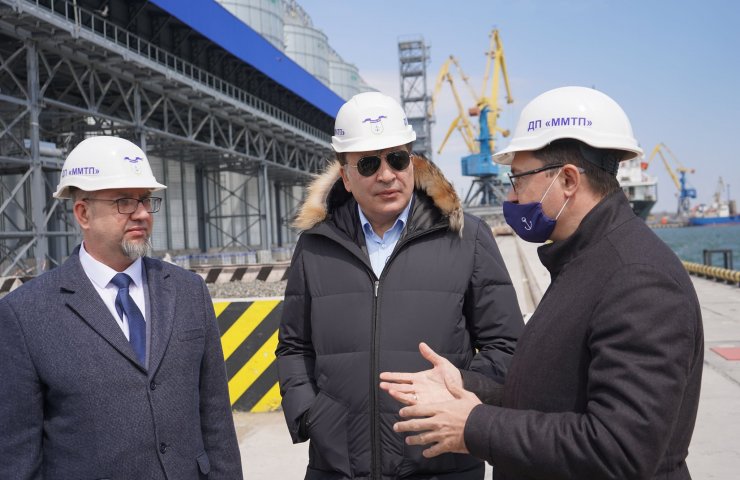 As part of a working trip to Mariupol, the seaport was visited by the Head of the Executive Committee of the National Council of Reforms of Ukraine Mikhail Saakashvili.

Accompanied by and. about. the director of the Mariupol port Igor Barsky and the mayor Vadim Boychenko, he visited the territory of the enterprise. In particular, at the 18th berth, where a high-tech terminal for processing steel sheets is located, and at the 4th, where a modern grain complex is being built, as well as in the main dispatching office of the port.

Igor Barskiy introduced the guest to the history of the enterprise, talked about how the volume of cargo handling has changed from year to year since the beginning of the military-political crisis in Donbass, and how the enterprise is solving the problem of increasing cargo flows.

Mikhail Saakashvili was interested in the prospects for the return of container lines, the possibility of a large-tonnage fleet entering the Sea of ​​Azov after the construction of the Kerch Bridge. And especially - the situation that has developed in connection with the order of the Russian side to ban the passage of naval ships and state ships through the Kerch Canal.

In the main dispatching office of the port, Mikhail Saakashvili was shown online what is happening now in this section of the water area.

While the situation is normal, the merchant fleet freely passes through the canal to the Sea of ​​Azov, which was convincingly evidenced by ten ships at the berths of the Mariupol port. But the problem of the passage of ships under the state flag of Ukraine remains unresolved, which is a big problem for the port, because with the closure of the Azov shipyard, the closest base for the repair of tugs and a specialized fleet is the Black Sea Kherson.

Финансовая аналитика, прогнозы цен на сталь, железную руду, уголь и другие сырьевые товары. More news and analytics on Metallurgprom telegram channel - subscribe to get up-to-date market information and price forecasts faster than others.
Сomments
Add a comment
Сomments (0)
On this topic
Yuzhmash told whether it is possible to launch reusable rockets from the Black Sea
Belanto Trade accused Dmitry Firtash of tarnishing the company's image to eliminate a competitor
International Steel Committee says gloomy outlook for market
Ferrexpo has appointed a new member of the Board of Directors
Elon Musk contracted coronavirus, but doubts the reliability of the tests
The steel industry, the United States recognized itself the most energy efficient in the world
Recommended:
Zaporizhstal summed up the results of production in October 2022
Russian steel production fell by 6%
Ukraine reduced the export of semi-finished products from carbon steel by 70.3%
News Analytics
China's iron ore output to rise in 2023 as new projects are launched30-11-2022, 18:10
"Centravis" agreed to supply a new batch of seamless pipes to a30-11-2022, 16:51
Metinvest enterprises in Ukraine resumed work after massive shelling of29-11-2022, 11:59
The European Council added the violation of restrictive measures (sanctions) to28-11-2022, 14:22
The abolition of export duty in India may reduce the price of Turkish steel28-11-2022, 14:07
Commodity prices will fall, metals quotes will rise slightly - Focus Economics28-11-2022, 13:28
Platinum market to face shortage next year - WPIC22-11-2022, 18:25
Global steel demand falls and will fall by 2.3% in 2022: WorldSteel19-10-2022, 23:12
Iron ore prices fall to 11-month low15-10-2022, 10:36
China production cuts in winter will give limited boost to steel markets -15-09-2022, 10:09
Sign in with: