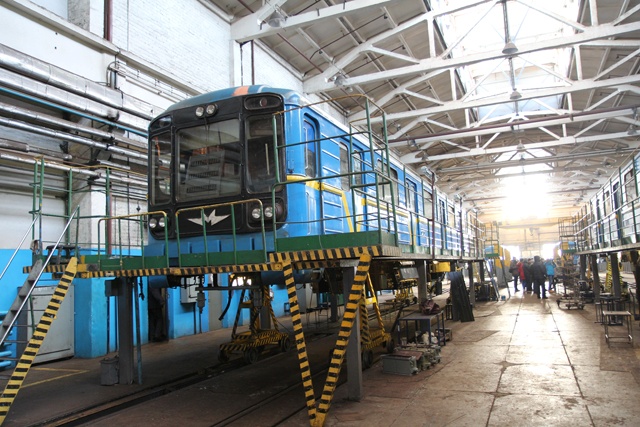 The leadership of Ukrzaliznytsia contributes to the conduct of investigative actions by the police at the Kiev Electric Car Repair Plant, the press service of the railway monopolist said.

Today, employees of the National Police of Ukraine are conducting investigative actions on previously open criminal proceedings against officials of the electric car repair plant.

"The management of Ukrzaliznytsia creates all the necessary conditions for the work of law enforcement officials and emphasizes its interest in eradicating any illegal phenomena in the work of the company," the press service noted.

At the beginning of this year, criminal proceedings were instituted on the facts of the seizure of funds from the Kiev Electric Car Repair Plant, committed by officials of this enterprise by prior conspiracy with officials of a number of business entities on an especially large scale in 2019.

Recall that in February of this year, representatives of the Swiss manufacturer of rolling stock Stadler Rail AG visited the Kiev Electric Car Repair Plant in order to study the possible localization of production in Ukraine of rolling stock for the City-Express railway project.

Recommended:
SE "Antonov" plans to produce its military transport aircraft An-74 in Canada
At a chemical plant in Rivne, a pipeline depressurization occurred in the nitric acid production workshop
European Commission imposed fines of 875 million euros on Daimler, BMW, Volkswagen, Audi and Porsche
On this topic
Vadim Novinsky was informed about corruption schemes in strategic energy companies
Ukrzaliznytsia will check its suppliers in connection with the disruption of diesel fuel supplies
Krukovka Carriage Works disclosed the findings of the company's repeated internal audit
Ukrzaliznytsia insists that took into account the recommendations of the Antimonopoly Committee in
The Russian billionaire is suspected of smuggling of petroleum products in Ukraine
The management of "Ukrzaliznytsya" will focus on "eradicating corruption"
Partner news
Сomments
Add a comment
Сomments (0)
News Analytics
Ukroboronprom confirmed the intentions of Antonov State Enterprise to start25-07-2021, 11:15
Gazprom reacted to the refusal of Naftogaz of Ukraine to buy Russian gas with25-07-2021, 11:00
Iron ore has become a strategically important raw material for defense -24-07-2021, 11:06
Vietnam overtook Ukraine in the world ranking of steel-producing states24-07-2021, 11:38
Port "Yuzhny" has set a record for the speed of loading pig iron on a ship24-07-2021, 10:10
On the regional markets of metallurgical products, prices are balancing in a22-07-2021, 16:22
Demand for armaments will ensure a stable growth of armored steel sales by 4%20-07-2021, 10:10
Protectionist Measures Support European Steel Prices Despite Summer Lull19-07-2021, 11:02
Positive price growth is observed in the markets for metallurgical products16-07-2021, 14:12
European steel market is in confusion: price growth has slowed down, but no one21-06-2021, 17:40