The only client of the Mariupol metallurgical giant is Ukrzaliznytsya, which does not supply Azovstal with orders in the normal volume. 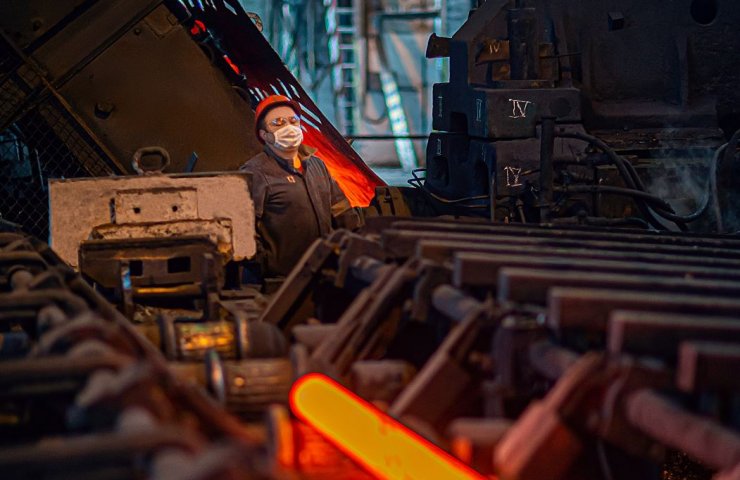 The utilization of the rail and structural section of the Mariupol metallurgical plant "Azovstal" this year is unlikely to exceed 30% of its current capacity, and one of the key reasons for this decline is the loss of foreign markets. This was reported in the press service of the plant in response to request of city site 0629.

“For a long period of time, the demand for long products remains extremely low, the rolling shops are periodically taken out of service due to low utilization. This is a consequence of the crisis in the domestic and foreign markets ", - noted in" Azovstal ".

In fact, the only major buyer of Azovstal main rails is Ukrzaliznytsya, which does not provide orders for the Mariupol enterprise due to the lack of systematic modernization of the railroad tracks in Ukraine. In addition, part of the railway infrastructure of "Ukrzaliznytsia" ended up in uncontrolled territory, as well as some large mines, which also need their own rails to equip mine workings.

In connection with this state of affairs, the administration decided to change the work schedules - from continuous to five days with two days off. An intrashop enlargement is also planned - the merger of a large-section rolling shop with a rail and beam shop.

The Narodnaya Solidarnost trade union said that workers in the shops of the rolling complex (crimping, rail and beam and large-section) were informed that a significant reduction is planned in July - about half of all employees in these industries.

Recall that the world steel market today is experiencing a sharp rise in prices, more than threefold for certain items of rolled metal, and a real boom in demand for the entire range of metal products. Queues at European factories reach three to four months, depending on the type of rolled products.

IREPAS Global Association of Long Products Manufacturers and Exporters Notes the excellent outlook for the long steel market for the second quarter. “Competition in the market is healthy, but there is enough demand for everyone. Accordingly, there is no concern about competition in general. The current state of the market is ideal for rolling over very good forecasts for the next quarter, ”the association said in a recently published report.

Финансовая аналитика, прогнозы цен на сталь, железную руду, уголь и другие сырьевые товары. More news and analytics on Metallurgprom telegram channel - subscribe to get up-to-date market information and price forecasts faster than others.
Сomments
Add a comment
Сomments (0)
On this topic
DSS supported the idea of localization of production in Ukraine electric locomotives
"Zaporizhstal" was visited by a member of the Board of JSC "Ukrzaliznytsya"
Metinvest cuts blast furnaces at the Azovstal metallurgical plant for scrap
The European Union has opposed the adoption of Ukraine's law on localization of production
Azovstal increased production of rolled metal products by 0.9% in January-November 2020
Modernization of blast furnace No. 3 at the Azovstal steel plant has reached the finish line
Recommended:
China to halve ferroalloy production due to weak demand
Zaporizhstal summed up the results of production in October 2022
Mining enterprises of Ukraine reduced the export of iron ore by 38.9%
News Analytics
China's iron ore output to rise in 2023 as new projects are launched30-11-2022, 18:10
"Centravis" agreed to supply a new batch of seamless pipes to a30-11-2022, 16:51
Metinvest enterprises in Ukraine resumed work after massive shelling of29-11-2022, 11:59
The European Council added the violation of restrictive measures (sanctions) to28-11-2022, 14:22
The abolition of export duty in India may reduce the price of Turkish steel28-11-2022, 14:07
Commodity prices will fall, metals quotes will rise slightly - Focus Economics28-11-2022, 13:28
Platinum market to face shortage next year - WPIC22-11-2022, 18:25
Global steel demand falls and will fall by 2.3% in 2022: WorldSteel19-10-2022, 23:12
Iron ore prices fall to 11-month low15-10-2022, 10:36
China production cuts in winter will give limited boost to steel markets -15-09-2022, 10:09
Sign in with: