The German delegation was primarily interested in whether the Mariupol port became unprofitable after 2014, but its head said that the enterprise has always been profitable. 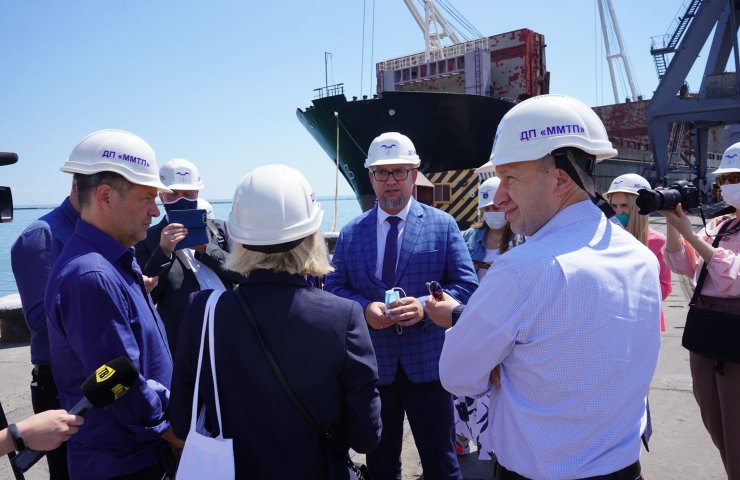 A delegation of the German Union 90 /Greens party headed by its co-chairman Robert Habek visited the port of Mariupol today. Accompanied by and. about. the director of the enterprise Igor Barsky and the deputy mayor of Mariupol Sergey Zakharov, the guests visited the sheet metal processing terminal at the 18th berth of the 3rd cargo area, saw the construction of a grain complex in the 1st district and looked into the main dispatching office of the port.

German parliamentarians were actively interested in the changes that have taken place at the Mariupol enterprise since 2014. In particular, with a decrease in freight traffic, an impact on the passage of ships of the Kerch bridge and inspections in the Kerch-Yenikalsky canal, problems in the railway infrastructure. And especially - has the Mariupol port become unprofitable with all the ensuing consequences: staff reduction, delayed payment of wages and tax deductions to the budget.

The first head of the port, Igor Barskiy, assured: “Port managers manage the enterprise in such a way that we have always had income. We have no arrears of wages and deductions to the budget, we do not make reductions, net profit from the beginning of 2021 is 4.5 million hryvnia. ”

We will remind that yesterday Robert Habek met with the President of Ukraine Volodymyr Zelensky. The interlocutors discussed the course of the election campaign in the German Bundestag. Zelenskiy welcomed Robert Habek's decision to travel to the contact line in the east.

“I highly appreciate your decision. You will be able to see firsthand the real picture of Russian aggression against Ukraine. I hope that what you saw in Donbass will help strengthen the position of your political force in support of Ukraine, ”the president said.