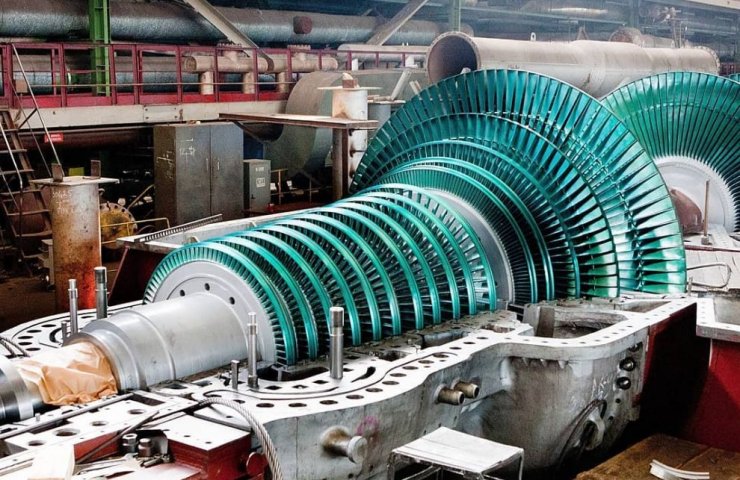 In the shops of Turboatom JSC, the production of the main units for the South-Ukrainian NPP has been completed. As the company said, work has been completed on the manufacture of equipment for the modernization of the medium pressure cylinder of the K-1000-60 /1500-1 turbine for Unit 2 of the South Ukrainian NPP. Earlier, a set of diaphragms had already been shipped to the NPP. As of today, assembly and testing department 73 has packed the medium pressure rotor and prepared it for shipment in early June.

The contract for the modernization of the flow paths of the million-plus turbine at the South-Ukrainian NPP was signed with NNEGC Energoatom on February 25 last year, it became the first contract of Turboatom for the modernization of the flow path of the million-plus turbine in Ukraine. In general, such a large-scale modernization of turbines at Ukrainian NPPs is being performed for the first time. The company has a positive experience in performing similar work for customers outside the country, including at Unit 5 of Kozloduy NPP (Bulgaria).

The current contract is part of the approved 5-year program for the modernization of equipment at Ukrainian NPPs, calculated until 2024.

The production of turbines is carried out in a closed cycle: from design and development and research work to manufacture, assembly, testing of turbines and shipment.

Финансовая аналитика, прогнозы цен на сталь, железную руду, уголь и другие сырьевые товары. More news and analytics on Metallurgprom telegram channel - subscribe to get up-to-date market information and price forecasts faster than others.
Сomments
Add a comment
Сomments (0)
On this topic
"Naftogaz" has filed a lawsuit against the government of Ukraine for the issuance of a
Time magazine named ecoactivists Greta Thunberg's man of the year
Emergency summit on chip shortage to be held in Washington - Biden administration
Energomashspetsstal successfully passed General Electric qualification
Energomashspetsstal will produce on the order of General Electric two qualifying billet
The Ukraine-EU summit may be postponed again - the head of the European Commission went into
Recommended:
Turkey will five times increase the price for the passage through the Bosphorus
London Metal Exchange for the first time in history banned trading for ethical reasons
EU Commission not doing enough to save aluminum industry - associations
News Analytics
Ukrainian court invalidated sale of Ferrexpo Plc shares in 200222-09-2022, 12:45
EU Commission not doing enough to save aluminum industry - associations21-09-2022, 11:07
Steel market in Europe expects big production cuts due to weak demand20-09-2022, 11:13
Ford warns investors to cut car deliveries due to parts shortages20-09-2022, 10:43
The price of lithium resumes insane growth after Elon Musk's remarks20-09-2022, 10:54
China production cuts in winter will give limited boost to steel markets -15-09-2022, 10:09
Steel prices may rise as manufacturers stop production11-09-2022, 14:06
IREPAS: The global long products market is in a "dramatic situation"10-09-2022, 20:49
Steel prices are unlikely to rise significantly in the near future - analysts02-09-2022, 22:58
Steel prices may move up on new data from China31-08-2022, 12:19
Sign in with: