The temple in the name of the great martyr Demetrius of Thessaloniki was consecrated on May 27, 2021 on the territory of the chemical plant "Azot" - the largest industrial enterprise in Cherkassy. 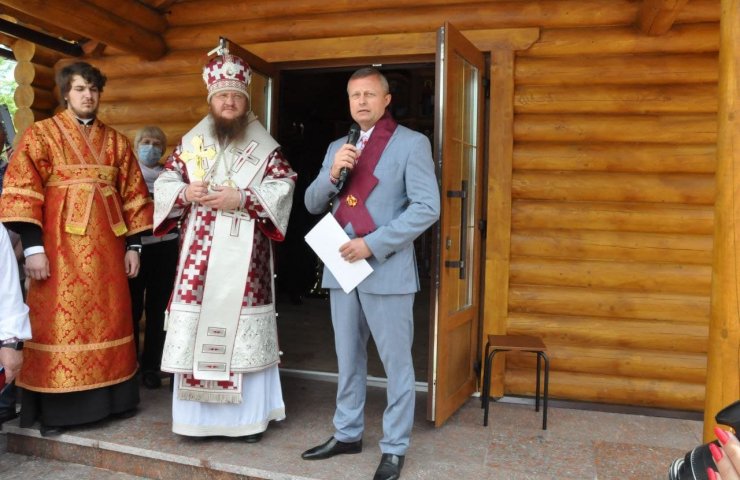 On May 27, on the eve of the Chemist's Day, a chapel built by the plant's employees was opened and consecrated at the Cherkassk "Azot". The event became a gift to the residents of Cherkassy and the company's staff for their professional holiday. Director of "Azot" V.L. Sklyarov was awarded a church order, active participants in the construction of the Ukrainian Orthodox Church were presented with blessed letters.

The chapel was built by Transcarpathian craftsmen from a wooden frame according to ancient technology. This is a full-fledged small temple, which has an altar, an iconostasis, and rooms for prayer. The temple is named in honor of the holy great martyr Demetrius of Thessaloniki.

The opening and consecration ceremony of the chapel was conducted by Archbishop Feodosy of Cherkasy and Kanev together with other representatives of the clergy.

According to the press service of Group DF, the doors of the chapel will be open all the time so that employees of the enterprise can come to pray in their free time. The constructed chapel has already become an adornment and the center of spirituality of "Azot", as well as a place where every traveler can stay, because it is located on the outskirts of the city. And on big church holidays, liturgies will be held in the Azotov chapel. It is symbolic that the first prayer in the only consecrated church was a prayer for chemists.

The Holy Great Martyr Demetrius of Thessaloniki was the son of a Roman proconsul in Thessaloniki (modern Thessaloniki, the Slavic name is Thessaloniki). Christian saint, venerated in the face of the great martyrs.

Azot Private Joint Stock Company is one of the leaders in the chemical industry in Ukraine. The enterprise is the main asset of the OSTCHEM holding in promoting the strategy aimed at popularizing the urea-ammonia mixture in the country. OSTCHEM is a company that produces nitrogen fertilizers. Is the key line of business of Group DF Dmitry Firtash.

Recommended:
Elon Musk said that Tesla is close to opening a representative office in Russia
World Bank will give Ukraine $ 211 million for giant batteries for hydroelectric power plants
Demand for scrap metal in Ukraine exceeds supply by 5%
On this topic
Cherkasy "Azot" shipped more than 100 tons of medical oxygen to hospitals
Trade unions demand from Zelensky to pay attention to the situation with the Zaporizhzhya
The fire at Severodonetsk Azot was extinguished by the enterprise
Smart Maritime Group launched 4 tanker for the Dutch VEKA Group
Yuzhmash told whether it is possible to launch reusable rockets from the Black Sea
Gladkovsky, the Corporation "Bogdan motors" is not going to capitulate
Add a comment
Сomments (0)
News Analytics
Demand for scrap metal in Ukraine exceeds supply by 5%19-06-2021, 11:45
Ukraine resumed sea purchases of gasoline due to restrictions on supplies from19-06-2021, 11:38
Installation of the first mine hoisting machine of Uralmashzavod began in Altai19-06-2021, 11:46
European designers have learned to inflate steel structures that could be a18-06-2021, 17:42
In Ukraine, police were accused of involvement in the theft of coal from trains18-06-2021, 17:51
Vaccinations fuel demand for platinum - World Platinum Investment Council08-06-2021, 12:55
Sharp price growth continues in the rolled metal market - Ukrpromvneshexpertiza08-06-2021, 11:04
Analysts note overheating of the global scrap metal market01-06-2021, 13:28
Hydrogen-fueled steelmaking could be competitive after 2050 - McKinsey19-05-2021, 14:22
Steel raw material prices are skyrocketing across the board18-05-2021, 12:34
Sign in with: