As an example of successful decarbonization, the top manager of Interpipe cited the electro-metallurgical complex of Interpipe-Steel, investments in which, according to the company, amounted to $ 1 billion. 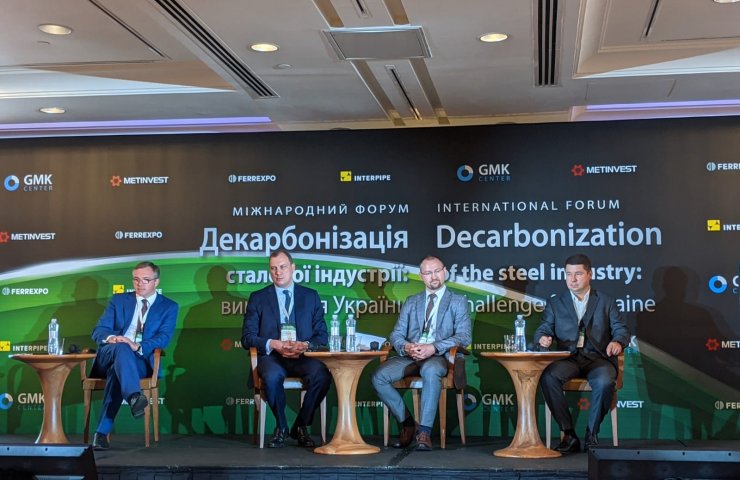 Decarbonization of the metallurgical industry plays an important role in the plans of all the leading countries of the world that have announced the achievement of climate neutrality. And Ukraine is no exception, the country will have to carry out eco-modernization of its enterprises to meet the Green Deal standards, said Denis Morozov, First Deputy General Director of the Ukrainian industrial company Interpipe, speaking at the forum "Decarbonization of the steel industry: a challenge for Ukraine"

He emphasized that today only electric arc-smelting technology allows meeting the requirements of the European Green Deal as much as possible. At the same time, the share of electrometallurgy in Ukraine does not exceed 5%, and the country looks like an outsider in the introduction of this technology, even against the background of the countries of Central and Eastern Europe.

However, in Ukraine there are successful examples of decarbonization: this is the construction of the innovative complex Interpipe Steel, the largest environmental investment in the amount of one billion dollars in Ukrainian industry during the years of independence.

The plant was built in accordance with all the strictest environmental requirements of the European Union instead of outdated, environmentally dirty open-hearth production. As a result, CO 2 emissions decreased 10 times, natural gas consumption - 8 times. The absolute analogue of Interpipe Steel is located in Italy, not far from the tourist center of Venice. It does not scare off tourists and does not affect the environment.

At the same time, scrap metal is becoming a critical raw material for the decarbonization of Ukrainian metallurgy, said the top manager of Interpipe.

“Using scrap can reduce 2 CO emissions by 60% per ton of steel. All countries of the world, realizing that the use of a ton of scrap metal instead of ore, does not allow burning 740 kg of coal, are trying to leave it in their country. Unfortunately, this is not the case in Ukraine today: the export of scrap metal is growing. For example, in June a record volume of scrap was exported in the amount of 85 thousand tons. This means that in Ukraine, as a result, 65 thousand tons of coal was burned with the corresponding emissions of CO 2 , "D. Morozov emphasized.

Let us remind you that the metallurgical lobby of Ukraine appealed to the government with an urgent demand ban the export of scrap metal from the country at least until the end of 2023. This is actively opposed in Association of Secondary Metals, calling claims of decarbonising the steel industry through scrap metal "manipulation" and non-market mechanisms for setting prices for raw materials.

In June of this year, the Ukrainian customs registered a record export of scrap metal, among other things, for the first time in recent years, the first shipments of scrap metal to the Republic of Belarus were made.

Финансовая аналитика, прогнозы цен на сталь, железную руду, уголь и другие сырьевые товары. More news and analytics on Metallurgprom telegram channel - subscribe to get up-to-date market information and price forecasts faster than others.
Сomments
Add a comment
Сomments (0)
On this topic
"Naftogaz" has filed a lawsuit against the government of Ukraine for the issuance of a
USA slapped sanctions on steel industry of Iran
Energomashspetsstal successfully passed General Electric qualification
Energomashspetsstal will produce on the order of General Electric two qualifying billet
Losses of Ukrainian industry from joining the European "Green Deal" will exceed half a
Railways in 2020 will buy the 40 locomotives General Electric
Recommended:
EU steel consumption hits third recession in four years: Eurofer
Minister of Energy of Kazakhstan visited ArcelorMittal Temirtau
The Baltic States plan to increase the capacity of offshore wind farms by seven times by 2030
News Analytics
Moody's changed the outlook for the global mining industry to26-09-2022, 19:04
Russia may increase taxation of oil, gas, coal and fertilizers26-09-2022, 15:58
UK steel production hits record low this year26-09-2022, 15:07
Ukrainian court invalidated sale of Ferrexpo Plc shares in 200222-09-2022, 12:45
EU Commission not doing enough to save aluminum industry - associations21-09-2022, 11:07
China production cuts in winter will give limited boost to steel markets -15-09-2022, 10:09
Steel prices may rise as manufacturers stop production11-09-2022, 14:06
IREPAS: The global long products market is in a "dramatic situation"10-09-2022, 20:49
Steel prices are unlikely to rise significantly in the near future - analysts02-09-2022, 22:58
Steel prices may move up on new data from China31-08-2022, 12:19
Sign in with: