It is planned that the commissioning of the storage facility will eliminate Ukraine's dependence on Russia in the storage of nuclear waste. 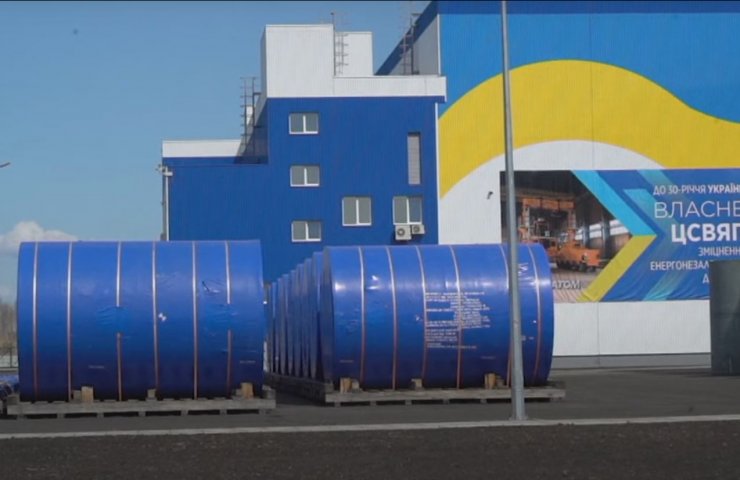 Ukraine has opened its own nuclear waste storage facility near the Chernobyl nuclear power plant. The launch of the facility coincided with the celebration of the 30th anniversary of the republic's independence.

Thanks to the operation of the storage facility, Ukraine hopes to reduce its dependence on Russia, where previously spent elements of Ukrainian nuclear power plants were exported. The annual costs of nuclear waste disposal in the Russian Federation cost up to 170 million euros.

“When nuclear fuel arrives, it is packed in another container and transported to storage. After that, we only need to monitor storage conditions, "says Vladimir Kholosha, Deputy Director General of Energoatom.

The technology was developed by the American company Holtec, from which Ukraine also purchased containers for waste storage. All in all, the project cost about 1.5 billion euros.

“The tractor has a nuclear fuel transportation mode. Its speed becomes 0.32 km /h, no sudden movements occur. And when it drives empty, its speed is 0.61 km /h, "- said the tractor operator Ivan Evenko.

As noted in Energoatom, the first nuclear waste will arrive at the storage facility in a few months, when the facility receives permission from the State Inspectorate for Nuclear Regulation.

Prior to that, Ukraine regularly exported waste from the Rivne, South-Ukrainian and Khmelnitsky nuclear power plants in the Russian Federation. The problem of storing such fuel in Ukraine became acute after the severance of economic relations with the Russian Federation. In 2012, it was decided to build a centralized storage facility for spent nuclear fuel.

The explosion in April 1986 at the Chernobyl nuclear power plant - then still Soviet - is considered the largest nuclear disaster in history. After the destruction of the fourth block of the nuclear power plant, a large amount of radioactive substances were released into the atmosphere. During the first three months after the disaster, 31 people died from radiation sickness, but the effects of radiation, according to various estimates, affected hundreds of thousands of people. Tens of thousands of residents of territories located within a radius of 30 kilometers from the accident site were relocated to other areas.

In 2016, a hundred-meter steel sarcophagus was erected over the destroyed reactor, designed to replace the deteriorated concrete structure, which was built by the liquidators of the accident in 1986.

Финансовая аналитика, прогнозы цен на сталь, железную руду, уголь и другие сырьевые товары. More news and analytics on Metallurgprom telegram channel - subscribe to get up-to-date market information and price forecasts faster than others.
Сomments
Add a comment
Сomments (0)
On this topic
Westinghouse and Energoatom signed a contract for the supply of nuclear fuel for the VVER-440
Uranium problems: Ukraine may lose its own production
Pavlisin: Energoatom may face a shortage of funds for payment of taxes and salaries
Stopped nuclear power plants and mines. What's going on in the energy sector of Ukraine?
Energoatom ordered a condenser from Turboatom worth 0.5 billion hryvnia for Zaporizhzhya NPP
Steelmakers of Metinvest helped to make Chernobyl safe
Recommended:
H2 Green Steel has received 190 million euros for the construction of a hydrogen steel plant
Minister of Energy of Kazakhstan visited ArcelorMittal Temirtau
The destruction of the dam of the Kyiv hydroelectric complex will not be a disaster - Ukrhydroenergo
News Analytics
The production of passenger cars in Russia decreased by 2.8 times in eight29-09-2022, 11:19
Donetsk and Torez electrotechnical plants will start producing electrical29-09-2022, 11:37
Ukrainian coking plants reduced gross coke production by 55.2%29-09-2022, 11:28
China ramps up investment in transport to bolster economy29-09-2022, 11:33
The heads of mining companies named the main risks for business29-09-2022, 10:03
China production cuts in winter will give limited boost to steel markets -15-09-2022, 10:09
Steel prices may rise as manufacturers stop production11-09-2022, 14:06
IREPAS: The global long products market is in a "dramatic situation"10-09-2022, 20:49
Steel prices are unlikely to rise significantly in the near future - analysts02-09-2022, 22:58
Steel prices may move up on new data from China31-08-2022, 12:19
Sign in with: