Cooperation with NuScale will provide an opportunity to produce small modular nuclear reactors in Ukraine, says the Minister of Energy of Ukraine Herman Galushchenko. 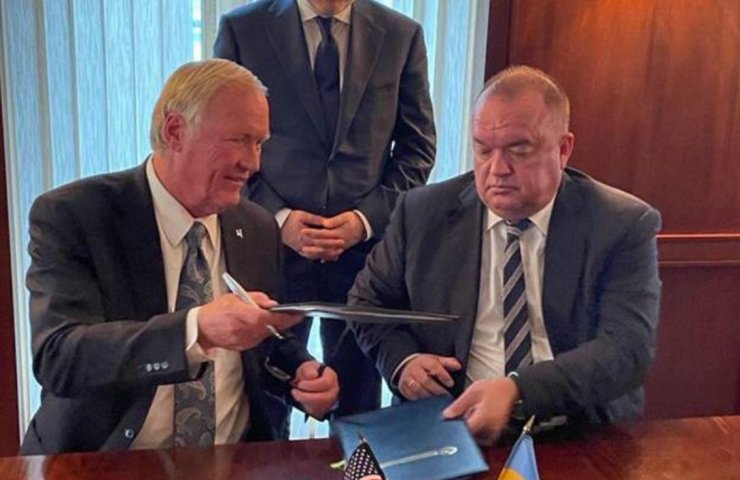 NNEGC Energoatom and NuScale Power in the presence of the Minister of Energy of Ukraine Herman Galushchenko signed a Memorandum of Understanding to study the possibility of building NuScale NPP in Ukraine.

The document stipulates that NuScale will support Energoatom on the following issues: expertise of small modular reactor (SMR) technology, including a feasibility study of the proposed sites; development of terms and intermediate results of projects; cost studies; technical analysis; licensing and permitting activities, as well as engineering research and design.

“The Memorandum is further evidence that cooperation in the energy sector is one of the key priorities of the strategic partnership between Ukraine and the United States. NuScale technologies make it possible to build small modular reactors in Ukraine. The Ministry of Energy to maximize the localization of production. The use of small modular reactors looks very promising for the development of a carbon-free generation, ensuring frequency regulation and passing daily peaks, ”said Herman Galushchenko.

Recall that earlier NNEGC Energoatom and Westinghouse Electric agreed on the joint construction of the Khmelnytsky NPP power unit as a pilot project with an electrical capacity of about 1.1 GW.

NuScale Power has developed a new modular nuclear power plant with a light water reactor that can be used for power generation, district heating, desalination, hydrogen production and other process thermal systems.

Recommended:
Metinvest increased revenue by 70% in the first half of the year as a result of high steel prices
Energomashspetsstal shipped over a thousand tons of steel products for export in August
Germany begins certification of the Nord Stream 2 gas pipeline, which may take up to 4 months
On this topic
Ukraine plans to start development of small modular nuclear reactors - Ministry of Energy
The Ministry of Energy of Ukraine discusses with the Czech Republic the idea of ​​producing small
The Ministry of Energy of Ukraine announced the inadmissibility of the privatization of Energoatom
Westinghouse and Energoatom signed a contract for the supply of nuclear fuel for the VVER-440
Stopped nuclear power plants and mines. What's going on in the energy sector of Ukraine?
Pavlisin: Energoatom may face a shortage of funds for payment of taxes and salaries
Partner news
Сomments
Add a comment
Сomments (0)
News Analytics
DTEK, the first industrial energy storage system in Ukraine, has been certified25-09-2021, 10:00
Russia reduced the export of ferrous metals by 12.7%24-09-2021, 20:05
Kamensky Mayor's Office asked Akhmetov and Novinsky to pay UAH 1.5 billion of24-09-2021, 14:17
Poland's largest coal exporter plans to invest in the steel industry24-09-2021, 12:48
Mechanical engineering of the Donetsk region of Ukraine falls for the second24-09-2021, 11:32
Moody's changes its outlook for the mining and metals industry from "positive"14-09-2021, 18:39
European steel prices decline from summer highs and remain stable high04-09-2021, 10:38
Rise in European steel prices to dizzying levels finally fizzled out - Bloomberg27-08-2021, 13:18
Gold continues to be the most efficient portfolio asset - WGC26-08-2021, 12:38
Falling iron ore prices caught Wall Street by surprise - WSJ23-08-2021, 13:57
Sign in with: