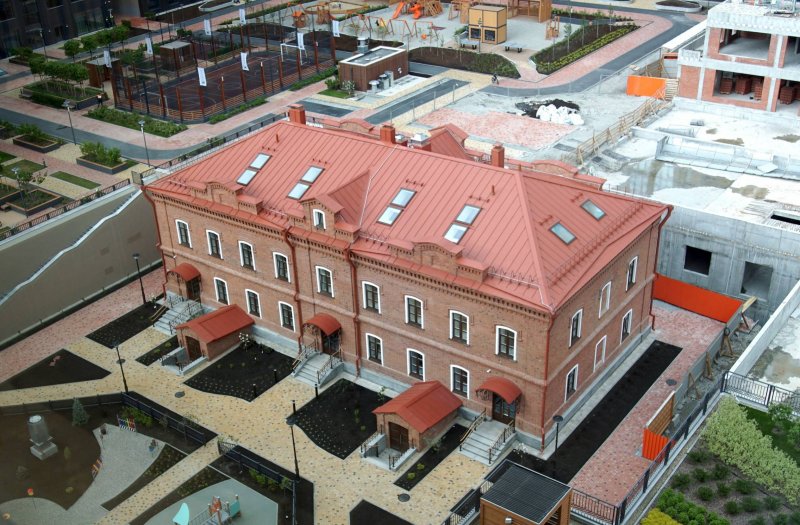 UMMC Developer has preserved an architectural monument. The renovated and restored building of the old laboratory will house the Children's Development Center "WORLD OF DISCOVERY".

The project took seven years to complete. The development of the concept for the adaptation of the building and preliminary design began in 2013, the design documentation - in 2018. UMMC Zastroyshchik began work on the restoration of the object and adapting it to the development center in February 2019, after receiving a positive Act of the State Historical and Cultural Expertise and approval by the Department of State Protection of Cultural Heritage Sverdlovsk Region and a positive conclusion of the state expertise.

The company has successfully solved a non-standard and interesting from an architectural point of view problem: restoration and integration into a single space of the Makarovsky residential complex of the production laboratory of the Simanovskaya mill while preserving its historical appearance. “It was important that we tried not only to formally preserve the building, but also to breathe new life into it, making it an aesthetic and functional addition to the existing part of the Makarovsky residential buildings. Special thanks to LLC APM-1, which completed the design work. It was a difficult and non-standard task, but we were confident that the city, known as one of the leading design organizations working with cultural heritage objects, headed by the Honorary Architect of Russia, Member of the Union of Architects Vladimir Gennadievich Rudnev, will definitely cope. The work was carried out under the supervision of the State Security Directorate of the OKN of the Sverdlovsk Region and the Department of State Housing and Construction Supervision of the Sverdlovsk Region. We also thank the Head of the Department - Ryabinin Evgeny Gennadievich and the Director of the Department - Rossolov Alexey Petrovich. The quality of construction and installation work during the entire reconstruction was monitored by the construction control specialists of JSC "Specialized developer" UMMC-Makarovsky ", - noted the head of development projects of" UMMC Developer "Evgeny Mordovin.

The historical part of the building has been preserved, restored and recreated by analogy with historical elements. The original brickwork was cleaned of dirt, the destroyed areas were restored using historic bricks, reinforced and protected from the external environment with modern building materials. The object received a new internal frame made of steel beams and monolithic reinforced concrete slabs, a new roof and a roof in the historical form made of flat steel galvanized sheet with a polymer coating. In the window openings of the structures, German double-glazed windows were installed using Guardia Glass (USA), while the historical dimensions of the openings were preserved. For natural illumination of the attic floor, dormer windows were installed in the plane of the combined sloping roof.

“We have eliminated all emergency areas; recreated many of the lost architectural elements: the lateral attic (by analogy with the surviving ones), details of the frieze and cornices, descents into the basement from the side of the main facade, etc. Also, work was carried out on the construction of a new wide doorway, which is necessary for the regulatory adaptation of the building for a children's development center. Some of the historic doorways along the escape routes have been expanded due to fire safety requirements. Internal engineering networks have been completely renewed using the most modern technological solutions. Now the building is provided with heat supply from its own ITP, water supply with an additional four-stage water purification system, supply and exhaust ventilation. At the same time, the total area of ​​the building after restoration has increased from 881.6 m2 to 1,290 m2, due to the use of the attic space for the attic floor ", - said Evgeny Mordovin.

In the same way, the developer approached the improvement of the adjacent territory; pedestrian zones are equipped with paving slabs, for playgrounds for small architectural forms (children's swings, a playground, a sandbox, etc.) natural sea pebbles and a special rubber coating for the sports area were used as coverings, landscaping was carried out.

On this topic
Residential complex of Yekaterinburg again entered the TOP of the LCD Russia
The first of 11 thousand: LCD "Makarov" from the "UMMC-Builder" recognized as the best residential
"UMMC-Builder" will give the city land for construction of social infrastructure in "the emerald
The company "UGMK-the Developer" has commissioned a residential house in the residential complex
Sport up and evaluation colleagues: builders UMMC participated in the forum "100+ Forum Russia"
Severstal starts accepting applications under the tenth grant program "Museums of the Russian North"
Partner news
Сomments
Добавить комментарий
Комментарии (0)
News Analytics
Azerbaijan's SOCAR plans to invest in the extraction of battery metals in26-07-2021, 22:00
The first domestic industrial energy storage system was developed and launched26-07-2021, 22:11
The profitability of purchases of scrap metal in Ukraine has decreased, but is26-07-2021, 17:27
Metinvest is ready to pay more than 9 billion hryvnia for the Dnieper steel26-07-2021, 13:01
Cherkassk Azot by Dmitry Firtash completed the modernization of the ammonia26-07-2021, 13:45
On the regional markets of metallurgical products, prices are balancing in a22-07-2021, 16:22
Demand for armaments will ensure a stable growth of armored steel sales by 4%20-07-2021, 10:10
Protectionist Measures Support European Steel Prices Despite Summer Lull19-07-2021, 11:02
Positive price growth is observed in the markets for metallurgical products16-07-2021, 14:12
European steel market is in confusion: price growth has slowed down, but no one21-06-2021, 17:40