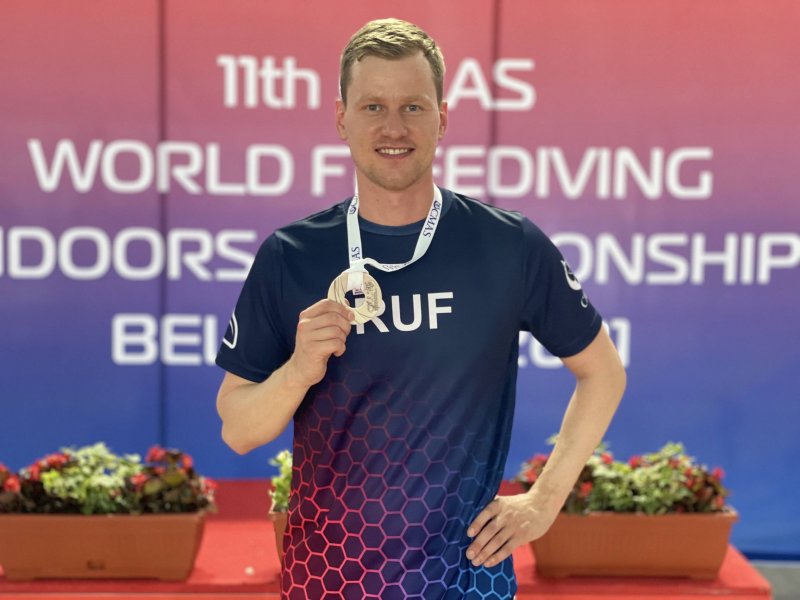 Head of the gas rescue service of Uralelectromed JSC (an enterprise of the UMMC metallurgical complex) Alexander Maksimov became the silver medalist of the World Freediving Championship!

The competition was held from June 21 to June 27 in Belgrade (Serbia). Alexander participated in four of the seven disciplines of the championship. He called the establishment of personal records as the main goal of the competition.

At this championship, Alexander made a bet on static apnea and dynamic apnea in classic fins. It was in these disciplines that he showed the best results at the European Championship in 2019. Then it was not possible to get to the prizes.

“The first day of the competition was remembered for strong emotional stress. He showed far from his best result, - says Alexander. - On the second day I was able to get ready. In static apnea, it turned out that all the main competitors - the contenders for the victory - came out after me. When I started my attempt, I did not know the results of the other participants and decided to go all-in and do everything to the maximum. There were a lot of hectic thoughts, but I was able to cope and ended the attempt with a result of 8 minutes 54 seconds. This is 4 seconds longer than the previous personal best. Also with this attempt I set a new record for Russia. I followed the attempts of other athletes with crossed fingers. I realized that I became a silver medalist when one of the strongest athletes showed the result in 9 minutes. But even then I still did not fully believe in what was happening. ”

Alexander's plans for the summer include rest, recovery after the competition and general physical training. He plans to return to pool training in the fall. The goal for the next season is to reach a result of over 9 minutes. With such indicators, you can claim medals of various competitions of the highest level.

Обозреватель рынка стали и цветных металлов. Пишу аналитические обзоры рынка для Металлургпром. More news and analytics on Metallurgprom telegram channel - subscribe to get up-to-date market information and price forecasts faster than others.
Сomments
Добавить комментарий
Комментарии (0)
On this topic
Mandrivnik Spodin Igor
Pyshminskiy metallurg became one of the best Russian freedivers
Employee "Uralelectromed" became the champion of Russia on free-diving
Knowledge Day of UMMC celebrated in Verkhnyaya Pyshma
For the first time in Russia, a corporate University conducted the defense of the thesis in
Ural Steel has mastered the production of heavy-duty sheet metal
News Analytics
Ukrainian court invalidated sale of Ferrexpo Plc shares in 200222-09-2022, 12:45
EU Commission not doing enough to save aluminum industry - associations21-09-2022, 11:07
Steel market in Europe expects big production cuts due to weak demand20-09-2022, 11:13
Ford warns investors to cut car deliveries due to parts shortages20-09-2022, 10:43
The price of lithium resumes insane growth after Elon Musk's remarks20-09-2022, 10:54
China production cuts in winter will give limited boost to steel markets -15-09-2022, 10:09
Steel prices may rise as manufacturers stop production11-09-2022, 14:06
IREPAS: The global long products market is in a "dramatic situation"10-09-2022, 20:49
Steel prices are unlikely to rise significantly in the near future - analysts02-09-2022, 22:58
Steel prices may move up on new data from China31-08-2022, 12:19
Sign in with: