the American human rights organizations say that as a result of the fuel of rebellion in Iran killed more than 200 protesters, Tehran denies this information. 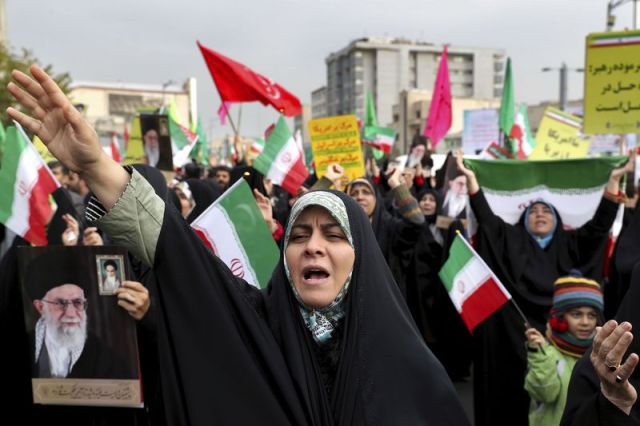 Iran is ready to return to the negotiating table if the United States begin to lift sanctions, said Wednesday President Hassan Rouhani, after the increase in fuel prices led to mass protests with casualties on the eve of the Republican elections.

European countries insist on negotiations with Iran to save the nuclear agreement in 2015, which practically stopped since then as the United States re-imposed sanctions against the regime Rouhani last year.

Iran is ready to negotiations under the auspices of the so-called "5 + 1", which reached an agreement - the five permanent members of the UN Security Council with veto power, plus Germany.

the Last statement Rouhani came after the shocking announcement in mid-November that the price of gasoline increased by as much as 200 percent, provoking protests throughout Iran.

"If they are prepared to postpone sanctions, we are ready to talk and negotiate, even at the level of heads of countries of the 5 + 1," said Rouhani in his speech live on state television.

"We are under sanctions. This situation ... is the result of the incitement of the Zionists and reactionaries in the region," he said, referring to regional rivals Iran - Israel and Saudi Arabia.

His remarks were made after France and Germany raised the question of the possible mechanism in the transaction, which can lead to the re-introduction of the UN sanctions.

Officially known as the Joint comprehensive plan of action (JCPOA), the deal with Iran was agreed by Britain, China, France, Russia and the United States and Germany.

twelve months after the US withdrawal from the deal, Iran began to reduce their commitments JCPOA, hoping to win concessions from those who is still a party to the agreement.

the London human rights group Amnesty International said on Monday that at least 208 people were killed in the crackdown, citing what it called credible reports.

on Tuesday the official representative of the Iranian judicial system Gholamhossein Esmaeili rejected anecdotal evidence of the victims represented by "hostile factions" from abroad.

Recommended:
Gladkovsky, the Corporation "Bogdan motors" is not going to capitulate
Entrepreneurs appealed to the past in isolation Zelensky with a request to meet
VostGOK received the license for realization of activity on uranium ore processing
On this topic
The world meteorological organization announced a new climate reality
We have to admit defeat or to make a breakthrough in the fight against global warming - Antonio
5 signs that the global economy is hurtling towards recession
Fighting global warming doesn't produce any results - UN
The rise in petrol prices sparked mass protests in Iran
Страны ЕС создают спецкомпанию для обхода санкций США против Ирана
Add a comment
Сomments (0)
News Analytics
Transshipment of ore in the port Yuzhny increased for the six months 80%03-07-2020, 11:57
Dneprovskiy metallurgical plant has completed a major repair of sinter machine03-07-2020, 11:07
Celsa Steel получила от правительства Великобритании экстренное финансирование03-07-2020, 09:22
Hyundai predicts a decrease of the car market in Russia by 20-25% in 202002-07-2020, 17:02
On the roads of Ukraine introduced strict control over waybills02-07-2020, 13:12
Steel prices in southern Europe are rising, despite weak demand23-06-2020, 10:54
Analysts expect strong demand growth for steel in China10-06-2020, 11:57
Global steel consumption in 2020 will be reduced by 6.4% - Worldsteel04-06-2020, 13:53
American steelmakers are faced with an unexpected problem associated with the14-05-2020, 09:09
Relying on the incentives, Chinese steelmakers increase production30-04-2020, 10:20
Sign in with: